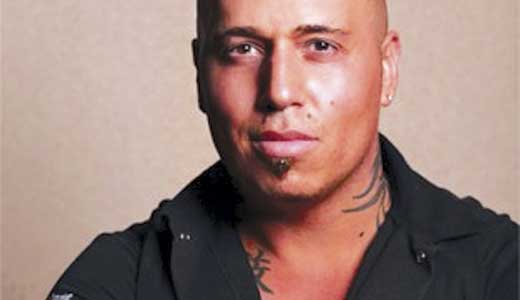 Louder Than Life Festival descends upon Louisville Oct. 4 and 5, bringing with it music that is, well, really loud, along with craft beer, bourbon, “gourmet man food” and plenty more.

Seriously, we’re talking everything from Judas Priest to Kid Rock to Korn to Limp Bizkit. Louisville’s collective hearing (and perhaps liver) will take weeks to recover, but here’s betting a crap-ton of people turn out for the festivities. This thing is going to be huge. (And loud.)

One of the “gourmet man food” attractions includes a number of celebrity chefs who will come to Louisville. One of those is Vic “Vegas” Moea, a Food Network staple from humble beginnings who has become a well-known personality on the celebrity chef circuit.

With Louder Than Life approaching, we had a conversation with Vic Vegas. It went something like this:

LEO: You worked your way up from a dishwasher to chef. Any memories you’d like to forget?

Vic Vegas: Absolutely. (Laughs.) I would just have to say the way I started off as a dishwasher. … You would show up to work and there’s so many fucking dishes in the kitchen, bro. Enough dishes to make you rethink the choice you made. Holy shit, I’m having a flashback.

LEO: I read you learned to cook from your mother and grandmother while growing up in Brooklyn. What sorts of cuisine did they teach you?

VV: Actually, a lot of baking. Not baking as in, like, pastries–classic Italian comfort food. Simple is better, and back in the day they were the bomb-ass legendary dishes of the household. They were always cooking and they would never shoo me away when I was interested in what they were doing, so that was cool.

LEO: You now specialize in traditional dishes with a modern, Vegas flair. Can you describe what that might look like to our Kentucky readers?

VV: Absolutely. We do what’s called a meatloaf spring roll. It’s simply taking two things that have been around since the beginning of time. When you put them together and make them one, they become something totally new. It’s like a funky twist.

LEO: What does the phrase “gourmet man food” mean to you?

VV: Besides the fact I just gave you great example of gourmet man food, it’s funny, this food we would create when you just had stuff sitting around the refrigerator became a whole trend. … I guess when I hear “gourmet man food” it sounds like something from the heart with a manly twist that everyone’s going to appreciate and enjoy.

LEO: Have you ever been to Louisville before?

VV: No, and I always wanted to go. It’s crazy being invited, because doing what I do and what I believe in got me there.

LEO: What dishes will you be cooking for your visit to Louisville?

VV: The only thing I can say right now is you can’t show up to a man food festival without a deep fryer. That’s all you guys get right now.

LEO: What’s the over/under for the number of bourbons you’ll have while you’re here?

VV: The goal is to try them all. In Vegas, I probably have five drinking nights a year because I’m so busy. But when you’re going down there to Kentucky, and you’ve got music and gourmet man food, and you put it all together, it sounds like the best time ever. You might have to taste as many as you can.