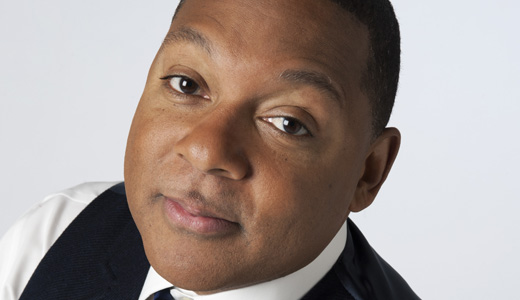 The Jazz at Lincoln Center Orchestra (JLCO), a 15-piece big band led by Wynton Marsalis, celebrated its 25th anniversary in 2013, no small feat for a big band. The JLCO returns to Louisville for a performance featuring music by, and associated with, two of the leading figures in modern jazz, Thelonious Monk and Art Blakey. Pianist/composer Monk is among the founders of post-World War II jazz, often referred to as bebop, utilizing “wrong” notes and creating a musical language of his own. He is best remembered today for his now-standard “’Round Midnight,” together with many other compositions (“Straight, No Chaser” and “Blue Monk,” to name just two). Drummer Blakey, who sometimes recorded with Monk, helped to popularize the gospel/R&B-influenced style of modern jazz known as hard bop. From about 1955 to his death in 1990, he led the Jazz Messengers, a group that over the decades served as incubator for dozens of future heavyweights, from Wayne Shorter and Lee Morgan; to brothers Branford and Wynton Marsalis in the early 1980s; who in turn were followed by New Orleans musicians Terence Blanchard and Donald Harrison. Each of these artists went on to successful careers as bandleaders following his apprenticeship with the Jazz Messengers.

Wynton Marsalis has become one of the most visible spokespersons for jazz. He has won not only several Grammys, but a Pulitzer Prize for Music for his large-scale work, “Blood on the Fields.” He spoke to LEO on the phone the day after kicking off the JLCO’s 2014–15 season with a new Afro-Cuban suite at the Lincoln Center. First, he discussed the music that the band will play while touring.

“Different people request different music, so we get another whole set of music to go on tour.,” he said. “We have a large library with thousands of arrangements, and we also do a lot of arranging ourselves. [Regarding Monk], we have Chuck Israels’ arrangement of ‘Four in One,’ but we have other arrangements of ‘Epistrophy,’ ‘Skippy,’ ‘Ugly Beauty’ by me, and more. Of the Blakey, we have a Frank Foster arrangement of ‘Nica’s Dream,’ an original composition I wrote for Art Blakey called ‘Bu’s Mood,’ and a Bobby Watson arrangement of his original that Art Blakey played a lot and loved, ‘Wheel Within a Wheel.’”

Marsalis discussed both the difficulties and benefits of playing with mostly the same musicians over 25 years: “The main challenge is keeping the band working, because big band is not the most popular form of music in the country. But in terms of the playing, it’s a blessing for me to have a band this great, and we all feel that. We’re into a golden period for the band; it’s playing on such a high level, we challenge each other. Our musicians are dedicated, and I don’t take it for granted. You know, when you’re younger, people think things have to be a certain way, but it’s easy to not understand when you have a blessing, so for me in this period, the band is absolutely a blessing. They come to play; they’re serious. That seriousness is not dependent on me.” He gave the example of a recent recording session (in which he did not play) for saxophonist Ted Nash’s “Presidential Suite,” in which lead trumpet player, Ryan Kisor, played the session with one arm after injuring his rotator cuff. As Nash said of Kisor’s dedication on his blog: “Heroic is the only word for it.”

Following up on the recording theme, Marsalis said, “We do a lot of recording. We’re about to put out a barrage of about eight new records in the next five, six years. We have all kinds of stuff; we’ve just been trying to get situated so our music can get archived on these recordings.”

Marsalis also reflected on Blakey, saying, “He had so much integrity about playing. We worked hard. We drove around in a van. Just to play with him — he loved the musicians. He played with such feeling. We had, and have, so much respect for him. And he loved Thelonious Monk; that was his man. He would call Thelonious up and say, ‘Please come save me from these young dumb m- – – – -f – – – – – -.’”

He closed by saying, “You can’t go wrong with Monk and Blakey. And the band is going to dig in and play.”