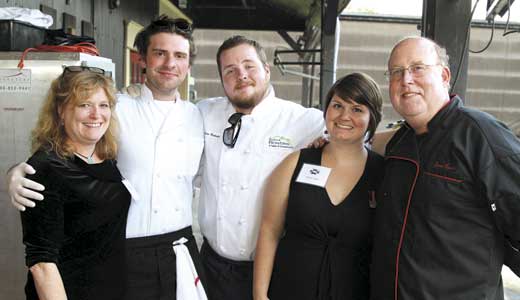 In June, 2013, Maker’s Mark employee and Bourbon Ambassador Jane Connor Bowie attended Volare Ristorante’s monthly charity night.  When she found out the monthly charity was APRON, Inc., she asked for some background information.  Here’s what she found out from Dawn Bianconcini, founding board member of APRON and employee of Volare at the time:

APRON is an emergency relief fund for cooks and servers.  Established in 2011, APRON’s mission is “to provide temporary, limited financial relief to professional food and beverage industry workers in the Louisville, KY metro area who work at locally owned establishments and who are experiencing financial distress due to illness, injury or other issues. Food service professionals who have suffered an accident, family emergency, criminal act committed against such person or other catastrophic event are eligible for assistance.” (Full disclosure:  I’m a founding board member, too.)

Well, apparently Jane thought that APRON was a pretty nifty charity that could benefit from some major corporate support.  Knowing that her employer was always eager to get involved with local charities, she asked Bianconcini if APRON would be interested in a partnership with Maker’s.  Specifically, they had an idea they’d been percolating – a progressive dinner at the Maker’s Distillery campus in Loretto.  Attendees would enjoy an evening of bourbon cocktails and food stations combined with a tour of the Maker’s distillery.  They wanted to hold it in September, and needed APRON’s approval right away so they could market it to their Ambassadors.

We on the board of APRON were floored.  Maker’s was offering us 100% of ticket sales, and offering to pay for the chefs’ and bartenders’ supplies, to boot.  We could not believe our luck in stumbling across Jane and her Maker’s Mark marketing team.  We said “yes” immediately, and set about trying to help them publicize their first “Delectable Distillery Tour”.   To be frank, they barely needed our help.  Maker’s has a great “Maker’s Mark Ambassador” event marketing system already well in place.  We, as APRON, were just along for the wonderful ride.  All we had to do was convince three local chefs and three local bartenders to opt in for a great evening.  And that was literally no problem at all.  Dean Corbett of Equus/Jack’s and Corbett’s an American Place, Dallas McGarity of Marketplace Restaurant at Theater Square (who, along with his partners, provided the space for APRON’s first fundraiser in 2012) and Joshua Moore (of Volare Ristorante) all created great Maker’s-based dishes for the attendees, and the cocktails provided by Joy Perrine (Jack’s Lounge), Isaac Fox (Volare), and Jared Schubert(The Monkey Wrench) were a hit with everyone.

Picture this:  a sultry September evening in beautiful Loretto, KY.  (Even the drive there on the bus was magical.  There were twists and turns on country roads I wasn’t sure our bus could manage, but the driver managed them masterfully.)  It was very warm.  We arrived at the distillery and got a quick tour of the stations the chefs and bartenders would man for the evening.  The rickhouses were lit by candlelight, and a string quartet was stationed in the central one, providing a lovely ambience.  Rob Samuels made the rounds, shaking hands with all of us and congratulating the board of APRON for their work.  Guests were repeatedly delighted with the food and beverage offerings.  A few of us on the board were super-delighted by the beverage offerings.  Ahem.  Thank goodness we had a bus to ride home on.

Happily, joyfully – and unbelievably – Maker’s raised over $15,000 in one night for APRON.  And then Maker’s and the Samuels family told us they wanted to make it an annual event.  Imagine our delight.

Earlier this summer, APRON held its annual tasting fundraiser, the “Disco Ball”.  APRON gives an award each year to the person or persons who have helped APRON the most.  The award, affectionately known as the “Corby”, is actually named the Dean Corbett Service Award, given for outstanding service and support to Louisville’s independent restaurant community.  Naturally it went to Chef Corbett in 2013, as he’d given APRON our seed money, even before we were officially a 501(c)3.  In 2014, APRON gave the award to Jane Bowie and her fellow members of the Maker’s Mark marketing team:  Natalie Stone, Jenny Jacoby, and Valerie Netherton.

In a few weeks, on September 18th, it’s all happening again.  Chefs Corbett, McGarity and Moore were eager to be back on board for this year, and we’ve added Chef Jon Plymale from Porcini.  The bartenders are Joy Perrine (the “Bad Girl of Bourbon”), Isaac Fox from Volare, and Vanessa Wilson from Porcini.  We expect another sellout.  Tickets last year were $100 per person.  This year the price is the same, or you could pay $150 to ride a bus from Louisville to Loretto and back – unfortunately (or fortunately, depending on your perspective) that bus ride is already sold out.  Ticket holders get to eat, drink, be merry, and dip their own bottles of Maker’s in their signatory liquid red wax.  All for a good cause.

It’s more than a good cause.  It’s a great cause.