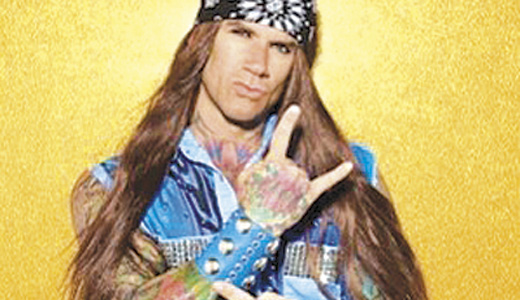 An actual heavy metal band with a wicked sense of humor, Steel Panther has played onstage with an entire constellation of A-list, headlining heavy metal bands. They are currently touring with Judas Priest.

LEO: Have you ever been to Louisville?

LEO: Kentucky’s the state of beautiful horses and fast women.

SZ: Yeah, I’m so excited I — I want to ride horses AND the women.

LEO: (Laughing) You know, we’re pretty well known for our bourbon around here. Do you now, or have you ever enjoyed bourbon?

LEO: Who are your favorite drummers?

SZ: Well, John Bonham’s number one. Tico Torres from Bon Jovi should be up there. I think Rikki Rockett (more for his hair); he’s from Poison. And I’m gonna say Rod Morgansteen, who played for the Dixie Dregs, but now plays for Winger.

LEO: Do you think there might be a glam-metal renaissance coming to the United States?

SZ: Oh, yeah! I think the time of the bands that were like shoe-gazers, the “woe-is-me” and the emo stuff, all that bullshit? It’s over. It’s time to party, time to have a good time, to have fun and enjoy your music with a smile. Eyeliner, not cry-liner.

LEO: I’ve heard lots of descriptors of Steel Panther. What genre do you feel you belong to?

SZ: I feel like we belong to the “super-duper bitchin’ heavy metal band” genre. That’s what I think. I mean, there’s really only one band in that genre right now, and I hope more are coming. Yeah, we have long hair. Yes, we wear glittery, shiny stuff. And yes, we are totally good lookin’. But I don’t want to be accused of being just another pretty face.

LEO: Are there any inherent problems that come along with constantly working wearing Spandex?

SZ: I prefer wearing Spandex, because that way whoever I end up with later that night … will know what they’re getting themselves into. There’s no disguising things when you’re in Spandex. I guess the only danger is, if you’re not filling that Spandex out properly, you’re in danger of not scoring.

LEO: Who in the band has the best taste in pants?

SZ: Taste in pants? I thought you meant has the “best-tasting” pants.

LEO: You can answer that question.

SZ: Well, I imagine our bass player — Lexxi Foxx — has the best-tasting pants because he doesn’t really sweat. So, I imagine if I were to eat his pants, they’d probably taste the best, out of all four of us.

LEO: Do you have any favorite memories of working with headlining bands? Any particularly wonderful thing that happened you can tell me about?

SZ: The best thing that ever happened was when we met Def Leppard. All those guys remembered our first names, from day one. And, whenever we’d see ‘em, it was like “Hey, Stix!” and it left an impression. It made me go, “When we headline, I’m gonna make it a point to remember names, ‘cause that is just a classy move. Because they don’t have to. It’s the fact that they did it; it says a lot about how cool they are.

LEO: Do you have another album in the works?

SZ: We’re working on a greatest hits record, so anybody who doesn’t have a Steel Panther record, they’ll be able to get this record — a collection of our most popular songs and fan favorites!