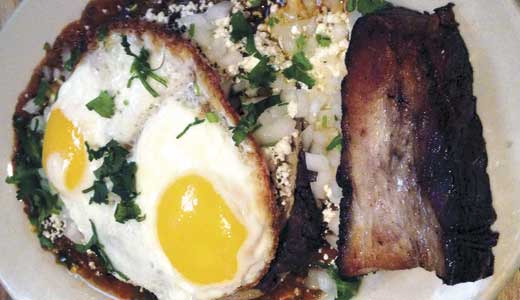 What? The food guy is going Mexican again?  Three weeks running, he’s ricocheted from Argentine beef to taqueria offal to fancified Chicano fare in the surfer tradition? ¿Qué pasa? Or, in the Queen’s English, what’s up with that?

Hmm. I suppose I could claim that I’m dining Latino-style out of solidarity with the flood of kids from Central America who are piling up at our border. I could say I’m doing it to take a stand in a national debate that prompts some Americans to yell that Lady Liberty lifts her lamp beside the golden door only for immigrants who look like us.

And those things could be true.

But to be honest, I mainly went to El Camino this week to check out the Sunday brunch that began there earlier this year. I had been eager to get back, anyway, since Chef Jonathan Schwartz moved on rather abruptly a month after it opened, to be replaced by Chef Brian Enyart, formerly chef de cuisine under chef-media star Rick Bayless at Chicago’s Topolobampo and Frontera Grill. That had to bode well.

Now, full up after brunch, I’m prepared to say that El Camino is just as good as ever. The brunch – offered from a menu, not buffet-style – is a fine way to while away a Sunday midday.

El Camino did a major remodel when it took over the old Avalon space. Its colorful Latino look, which mashes up stained-glass church windows and presumably ironic votive candles with Dia de Muertos tchotchkes, is just as bright and fun by daylight as it was during our previous dinner visit.

Chef Enyart’s team does a fine job with the brunch menu, too. It’s served from 10 a.m.-4 p.m. Sundays and offers eight entrees, ranging in price from $9 (for plantain pancakes) to $18 (for the affectionately named “John Wayne” breakfast, a burly American repast of grilled prime filet, eggs as you like ‘em, bacon and crispy potatoes). A selection of El Camino’s antojitos (small-plate snacks) and tacos on handmade corn tortillas are $3 (for a veggie taco) to $8 (for a Tijuana-style Caesar salad or tilapia ceviche).

Our group mixed and matched a bunch of brunch, and we didn’t complain about a thing.

Kale and black bean tacos ($3) may sound like a wacky combination, but it’s super-foodish and healthy, and the flavors go together surprisingly well, sauteed greens and tender beans on a soft corn tortilla, garnished with queso blanco, chopped cilantro and lettuce julienne.

Huevos Rancheros ($10) put a Latino spin on a classic breakfast with a base of earthy black beans beneath a tender corn tortilla, which in turn bore roasted tomato and a pair of sunny-side-up henfruit, with cilantro garnish, chopped onions and a thick slab of bacon alongside.

A platter loaded with plantain pancakes ($9) with brown-sugary piloncillo sauce was large enough for the group to share, dusted with powdered sugar; and a plate of chilaquiles ($11) was piled high with scrambled eggs, guajillo peppers and spicy chorizo.

Adult beverages are available, of course, but we went with strong coffee this time. My share of brunch came to $22.26, plus a $6 tip.

Craft House packing them in on Frankfort

Folks in our Crescent Hill neighborhood have been watching with considerable anticipation as a crew associated with Louisville’s Bluegrass Brewing Co. sped through a major “gut rehab” of the old Darkstar tavern, converting what had been frankly a rather grim saloon into an airy, inviting temple to all things local beer and food.

We dropped in on opening night, Aug. 25, and saw tons of our neighbors there as well as some of the city’s most ardent beer lovers drawn from farther afield. It’s way too soon for a formal review – I look forward to the happy opportunity to visit repeatedly before I go there – but I think I can already say without fear of contradiction that this place is going to be a hit.

Consider if you will the potential delights of a 50-tap row of draft beers entirely limited to about a dozen local and regional craft brewers, and an intriguing, affordable menu that sprawls over two large pages, incorporates everything from poutine to shrimp and grits and short ribs, and includes many vegetarian and gluten-free options. It names and praises a dozen local farms, farmers and food-and-drink businesses that provide the provisions, and so do we.

We ran into a beer-loving pal and, among us, knocked back a set of oyster hush puppies ($9), a Caesar made with charred romaine ($7), an intriguing veggie burger made with smoked eggplant and barley ($10) and an earthy, creamy quinoa salad ($10), and a sampling of pints, and were much impressed at the way the kitchen and front of the house were rocking it on Day One.