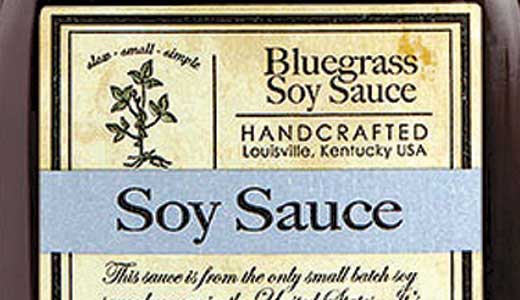 “Slow.  Small.  Simple.”  That’s the slogan of Chef Matt Jamie’s Bourbon Barrel Foods in Butchertown.  Jamie first got the idea for small-batch, artisan soy sauce while eating oysters and drinking beer in Gainesville, Fla., in 2003.  He brewed his first batch of soy sauce at home in Louisville.  Eleven years later, Bluegrass Soy Sauce is the only micro-brewed soy sauce in the United States, made from Kentucky-grown soybeans, soft red winter wheat and limestone-filtered water.

Aged for a year in re-purposed bourbon barrels, BBF Bluegrass Soy Sauce has become a favorite of chefs all over the US and beyond. (Note from the author: As a chef and an avid home cook, I can enthusiastically vouch for its deep, savory, not-too-salty, umami flavor.  I use it in any dish or recipe that calls for soy sauce.)  And it’s widely available – by order directly from Bourbon Barrel Foods, and in specialty food shops locally: Whole Foods, Lotsa Pasta, Paul’s Fruit Markets, Rainbow Blossom, Liquor Barn, Valu Market, Nanz and Kraft Florists, Taste of Kentucky, (deep breath) AND early Bourbon Barrel Foods  supporters Work the Metal – the  adorable, quirky décor/clothing/accessory showroom in the front of the Butchertown Market space that includes the BBF warehouse and the Kitchen Studio.

In 2010, Bourbon Barrel Foods was featured on an episode of the Canadian TV show “How It’s Made.”  I was privileged to be at the BBF warehouse during the filming.  Jamie going through his paces – making, sampling, labeling and bottling the soy sauce  – was a joy to behold.  His mom and dad were there, both of them obviously a huge support system for him.  My boyfriend and I, giant, geeky fans of “How It’s Made”, loved watching every step of how the show was filmed.  We later attended a viewing party for the episode at our beloved, now long-lost Blind Pig restaurant in Butchertown.

In 2013, Bourbon Barrel Foods created the Kitchen Studio in a corner of their warehouse – facilitated by a generous grant in the form of new appliances from GE Monogram, and cookware and serviceware from Lodge Cast Iron and Louisville Stoneware – and Jamie himself paid for the renovation/transformation of the warehouse corner to a studio kitchen.  Bourbon Barrel Foods now hosts cooking classes, chef-driven demonstations and corporate team-building events in the Kitchen Studio.  Also, all new episodes of “Secrets of Louisville Chefs,” the local cable show featuring local Louisville and regional chefs, are currently filmed there.

Bourbon Barrel Foods is now affiliated with various organizations that support the company’s goals, for instance:  The Southern Foodways Alliance and Greater Louisville Inc.  –  (the “Metro Chamber of Commerce, dedicated to connecting and growing business.”) Bourbon Barrel Foods is an active member of GLI and supports the group’s pro-business environment.

The “Eat Your Bourbon” series is Jamie’s latest endeavor.  Monthly cooking classes led by Jamie instruct attendees on Bourbon-Country inspired recipes using Bourbon Barrel Foods products.  The “Eat Your Bourbon” Chef Series is a monthly tasting and demo event with a chef that Bourbon Barrel Foods selects to feature. Both events are meant to educate people about the gourmet foods side of the growing bourbon industry.

I spoke with Jamie about the genesis of the Kitchen Studio at Bourbon Barrel Foods.  He told me he initially asked for advice from Chef Edward Lee of 610 Magnolia, Milkwood at Actor’s Theatre and Top Chef fame. He said to Lee:  “You’ve got yours – now I’m trying to get mine!” He reached out to GE, without asking for the high-end Monogram series of appliances in particular – but that’s what he got.  Within its small 800 square feet of space, BBF KS includes two refrigerators (one with an exterior window so you can see what’s in there without opening the door), an Advantium oven, a new convection oven, a commercial dishwasher, a double door lowboy fridge, and a 4-foot gas range with an exhaust hood.  Any chef or restaurant cook can tell you what kind of amazing “Christmas” day that is for someone creating a kitchen space.  I only wish I’d have been there when Jamie was opening the crates and boxes.  I’m sure there was a lot of weeping and hugging going on.

Jason Cohen of Cohen Wood did the woodwork for the Kitchen Studio – using reclaimed mahogany wood flooring as the backsplash for the space, fabricating the counter and “milking stools” for class seating with leftover wood from a horse farm in Lexington (with legs made from bourbon barrel staves.)  A friend, Chuck Miller, made chandeliers constructed from bourbon barrel hoops.  BBF’s Kitchen Studio fits 10 to 12 people comfortably for classes and corporate team building events, with another 12 on the perimeter at satellite tables.  And – surprise!  There is a bar in the back of the kitchen.

So far, BBF’s Kitchen Studio “Eat Your Bourbon” Series has hosted chefs Michael Crouch from Bistro 1860, Nick Sullivan, executive sous chef of 610 Magnolia, Shawn Ward – Jack Fry’s executive chef of many years – from Ward 426 (the former Brewery), Anthony Lamas from Seviche, Bobby Benjamin from La Coop:  Bistro a Vins, Fernando Martinez of Mussel & Burger Bar, El Taco Luchador,  the newly minted Coconut Beach Tacos and Cerveza, and Cena Italian Trattoria (formerly The Place Downstairs underneath Mussel & Burger Bar, now with a new concept.) Note to Fernando:  you are wearing me out with all these restaurants to list!  Edward Lee from 610 Magnolia also did a signing of his book “Smoke and Pickles” at the Kitchen Studio.

Next up at BBF Kitchen Studio:  Chef Patrick Roney of the Oakroom at the Seelbach on Aug. 30.  I asked Chef Roney what made him decide to participate in the series, and his thoughts about BBF products.

“I love the concept of sharing my interpretation of ingredients with people who are truly interested in food. When it’s products like BBF it’s a no brainer. (It also gets me out of my kitchen for a while.)  I wanted to showcase the products with little interruption, so I looked for logical vehicles to do that. One ingredient is butter – which I temper like chocolate and dip crudités in, then sprinkle with different Bourbon Barrel Foods spice combinations. (Note from the author:  I’ll take ten of these!) Another is a side of salmon simply rubbed with all the spices BBF makes, along with some of my touches and then cured for a few days with BBF soy sauce and Worcestershire sauce. Ultimately, I just put great ingredients together whimsically.”

Who needs any more reason to Eat Your Bourbon?  I’ll see you at the Kitchen Studio.  For more info about attending Kitchen Studio events, go to BourbonBarrelFoods.com.