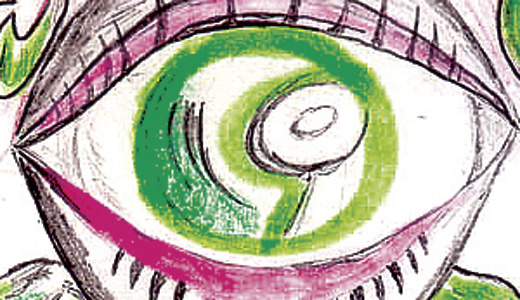 This year marks the fifth for Cropped Out, a festival that includes some the weirdest and most adventurous music out there. And they aim to up the ante this year with a lineup that includes seminal space-jazz pioneers, the Sun Ra Arkestra, as well as local greats White Reaper, Anwar Sadat, Vaderbomb and Tropical Trash, to name just a few. Hosted at the American Turners Club on River Road, the three-day festival is not only loaded with mutated rock bands, but also offers camping, basketball and horseshoes, as well as food trucks and record vendors.

Cropped Out is one of co-founder Ryan Davis many music projects. He has his label, Sophomore Lounge, and his bands, State Champion and, most recently, Tropical Trash. Davis says he and longtime friend James Ardery co-founded the festival after “hanging out at Jim Porter’s one night” and “talking about how fun it would be to rent it out and have a giant party with all of our friends’ bands.” We investigated it as a legitimate option for a while and it wasn’t feasible, but the idea stuck with us and we quickly turned over some more stones in search of a place where we could hold such an event on our own terms. We found Turners, the idea solidified and the rest is history.”

Speaking of the relationship between his Sophomore Lounge label and the Cropped Out festival, Davis notes, “They are fundamentally different in that one is focused on facilitating live arts and music performances, while the other operates as an outlet for recorded music. They are similar in that they are both labors of love involving myself and my friends’ bands. Aside from spending time with my girlfriend, family, loved ones, I’ve dedicated my life to music almost entirely at this point. So they do blend together as one in many ways. Everything I do is done toward some sort of greater goal of creative accomplishment and fulfillment through sound and sight. It’s all very important to me and the people with whom I’ve chosen to surround myself.”

Davis admits that the festival is “a haven for mutants, chuds, freaks, weirdos, witches, skaters, punks and the like. But absolutely open to every other kind of interested persons as well. There’s something for everyone at Cropped Out, we make certain of it. Russ Smith, Kevin Ware and Chane Behanan came out in 2012 for the Lil B performance. I’ve seen cowboys, frat dudes, goth chicks, grandparents, infants, traveler kids, good ol’ boys, artsy fartsy types, every kind of person you could imagine in the audience at some point or another. Come one, come all!”

Despite joking that the end goal for Cropped Out is in “getting rich, selling the festival and buying an NBA team, The Kentucky Smokes,” Davis and company are clearly ambitious about their vision. “It’s just not something that has ever fully gelled with people here beyond an awesome handful of devout believers who have stood behind it, for whatever reason, from the get-go. We’re selling an experience that is unfamiliar to people, so I think it can be intimidating, if not flat-out frightening. We continue to do what we can to push it to that next level of reception, but it’s a long and challenging process. We learn something new every year.”

One thing is clear: This is an event dedicated to self-empowerment and letting your freak flag fly. For Davis, “The beauty of DIY music is that the richness of a local music community is not for the sake of insularity, but one to be shared with other communities, with other perspectives, be it within the state of Kentucky or across the country somewhere.”

It is this spirit that informs what should go into putting on a good show. Davis believes that “if a performer can connect with both their audience and the physical place wherein they are performing, I think it often times allows them to connect with themselves in a way, tapping into something, creatively charging them and those who are there to witness. There’s a circulatory system of some sort. The performer is perhaps the heart, but it powers a greater thing.”

Davis was serious about that basketball joke, at least in his love for the game. Recently, he and his crew hosted the Fouled Out Basketball tournament as both a promotion for Cropped Out and to help cover some expenses. Davis admits, “My friend Bryan Whiteman’s team, Blouses, won it. The basketball tournament was seriously so much fun. Good turnout, good vibes, cheap beers. I’m lucky my team (Tropical Trash) lost to Holy Grale/Gralehaus in the first round. It was a close game, but we were all far too tired to play another. I would have fallen flat on my face.”

Continuing, Davis adds, “That whole thing was my good friend Cutter Williams’ idea. He has really stepped up to the plate this year and helped me with a lot of the day-to-day work that’s involved with making the festival come to fruition. In specific, he’s been focusing on ways to get the community more involved, be it through word-of-mouth or local business sponsors or events like the Fouled Out tournament. He just thought it would be a fun way to not only raise a little money to cover our expenses for the fest (port-a-potties, insurance, security, fliers, etc.), but more importantly, to raise awareness for what we do, as well as for Turners as a venue. It’s a little bit off the grid compared to somewhere like Nachbar or the Highlands, but it’s one of our favorite spots in town and I wish more people knew about it.”

As for the Turners Club, Davis finds the venue equally compelling, a slice of heaven often forgotten, “They’re awesome. Very patient and open-minded to the chaos that inevitably ensues each year. The Turners Club is such an untapped resource in this town. Even I forget it’s there sometimes. Such a wonderful place to spend an evening in the fall, on a balcony overlooking the river, sipping a beer and soaking up the vibes.”

And how can that not sound relaxing? Come out this Friday prepared to stay for the weekend and find out. Or just ride down and see what all the madness is about. Tickets are available on the Sophomore Lounge site or at Astro Black.