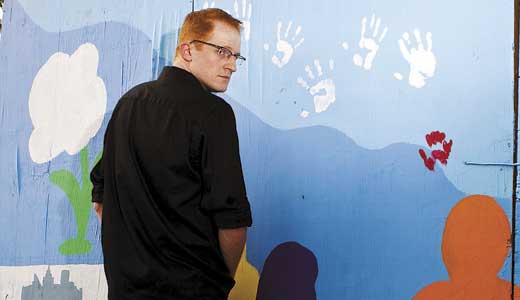 In January, a mere eight months ago, The Comedy Caravan was a hallowed temple of comedy history on the brink of imploding. It was a fledgling business that was struggling to keep its head above water. The local comedians had all but left and the level of talent that was being propped up onstage from week to week was second tier … at best.

The two men were experienced comedians and longtime friends who decided they were going to buy the club and salvage it from the comedy purgatory to which it was rapidly spiraling. They came in, changed the name to Laughing Derby at Comedy Caravan (Laughing Derby for short), spruced up the interior a bit, updated the equipment and, most importantly, elevated the talent you would see onstage.

Now, less than a year after they bought the place, it is a thriving pillar of the Highlands community. They are filming a weekly, nationally syndicated TV program in the showroom, and the club is preparing to host its first Comedy Festival this weekend.

The television show is called “Laughs,” and you can see it locally every Saturday night on WDRB 41 at 11 p.m. Hosted by Hofstetter himself, it is a high-concept, fast paced perspective on the typical stand-up showcase program. It incorporates stand-up, sketch comedy and social media into a giant swirl of pop culture commentary. Hofstetter flies into town weekly to film at Laughing Derby, which gives locals a rare opportunity to come out and be part of a nationally televised show.

“It was one of those things that just kinda happened and it was perfect timing,” Hofstetter told me about the genesis of “Laughs.” “The network wanted me to shoot in L.A., and I said: Wait … I gotta better idea. I think this is a really cool place to shoot, and Louisville has the vibe I want for the show. It’s indie, artsy … it’s hard to put into words exactly what I’m talking about, but I think everyone knows exactly what I’m talking about.”

And this Wednesday, the first Derby City Comedy Festival will launch, dispersing comics simultaneously into venues all across the city. “I always wondered why there wasn’t [a comedy festival] here,” he said. “But it’s not like I was going to throw one in a place where I didn’t own a venue. Because if you don’t have complete control of at least some of the rooms, then this is something that’s very difficult to pull off.”

There will be performers that you’ve seen around town and comics traveling from as far away as New York and Los Angeles. Comedians such as Dan Weeks, Kat Timpf and Jonathan Pfendler will be joining local favorites such as Keith McGill and Patrick Passafiume, just to name a few, who will be on hand for the festival shows. They will be performing all over town beginning Wednesday evening and running through Saturday night at venues such as The Laughing Derby (of course), Mulligan’s, Zanzabar and The Bard’s Town.

“I think this is going to be a lot more like comedy summer camp,” Hofstetter  says, chuckling. “A lot more hanging out and just playing around town – the one thing I love about Louisville is that everyone kinda has to stick together. In other cities with these kinds of things, everyone is there so independent, they all know somebody or are crashing on a couch, or they wanna see the Statue of Liberty – so everyone just kinda goes their own way. In Louisville, they’re going to be stuck with one another.”

The festival will also include one of the acclaimed celebrity roasts by The Young, Dumb and Full of Comedy crew late night Friday and Saturday. “We just took all the absolute best that Louisville comedy has to offer and put them under the umbrella of this festival for the weekend,” he says. This time around, the roast crew is setting their sights on pop culture stalwart “Hollywood Squares,” operating with a new format; it should be one of the many highlights of the Derby City Comedy Festival.

Beyond the live shows in Louisville’s finest small venues, the festival will also feature nightly parties, Ping-Pong tournaments and goldfish races throughout. Once the weekend is over, the Derby City Comedy Festival will conclude with two huge shows featuring nationally renowned comedians Nick Swardson the first night, with Maria Bamford and Pete Holmes following two nights later, at The Palace and Iroquois Amphitheater, respectively. (More on those next week.)

“I’ve always had a soft spot for Louisville,” Hofstetter says of why he does so much in a town he doesn’t even live in. “This is the first place I ever headlined, but even before that, this was the first town that really made me feel like a comic. I’ve always enjoyed it, for whatever reason, I started vibin’ with people here early on.”