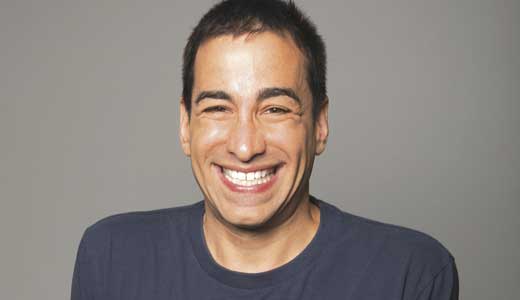 Mitch Fatel has been kicking around comedy clubs for 25 years now. His brand of comedy is raunchy, but he delivers it with a childish naughtiness that somehow makes it all seem perfectly innocent. Hailing from New York City, Mitch has performed on The Late Show with David Letterman and Late Night with Conan O’Brien. He also co-hosts a satellite radio show with his wife called Sex and Swinging with Mitch and Jessica.  He will be performing this weekend at The Laughing Derby.

LEO: What did you know about Louisville before the first time you came through?

MF: Kentucky was one of those places that, as a New Yorker, I never really knew existed. I knew the name, but I didn’t know it was real.  You’re brought up in New York and hear about Kentucky your whole life, and then you get there and you’re like, “wow, this is really a place.” As a comedian, you get to see all these amazing little places in between that are actually more fun than New York or L.A.

LEO: Your last album, Public Displays of Perversion, was fantastic.  Are you going to be working from that album or new stuff?

MF: I’m married now – so my life has changed a lot because of that, and it’s 40 minutes of new material of my take on marriage, which is a lot different than other people’s because I married this really cool bi-sexual wife. So a lot of my act is about my bi-sexual wife. She wants to have all of these wild experiences, and it’s probably the funniest act ever done.

LEO:You’ve always talked a lot about sex, but now that you’re married is there anything the wife has banned you from talking about onstage?

MF: No, actually that’s one of the great things about my wife. When she met me, she just thought I was funny. When we married, I was like, “Do you care if I talk about every aspect of our lives?” And her response was, “As long as it’s funny, that’s all I care about.” And people were shocked. They thought when I got married my act would be more tame and not as funny; but in reality it’s dirtier and more intellectual because most people look at marriage as being stuffy and lame. I look at it as being real sexy and freaky.

LEO: What do you think your wife would say is the worst part about being married to you?

MF: That’s a great question.  I’d say probably the fact that I look so adorable onstage and no one knows that I snore like a fucking animal.  I’m only 5’4 and weigh 135 pounds, but I snore like a 600-pound lumberjack – I think that’s probably what she would say.  Half the time she’s just smacking me with stuff in the bed so I’ll shut up, because I snore so loud.

LEO: You all have a radio show together, so what would you say is the hardest part about working with your wife?

MF: The worst part about working with my wife is that she gets me too turned on.  I can’t look at her during the show. She’s an ex-stripper; she’s everything I’ve ever wanted to have in my life, so I constantly just wanna have sex with her – so a lot of times I can’t keep my mind on what I’m doing when she’s ?around.