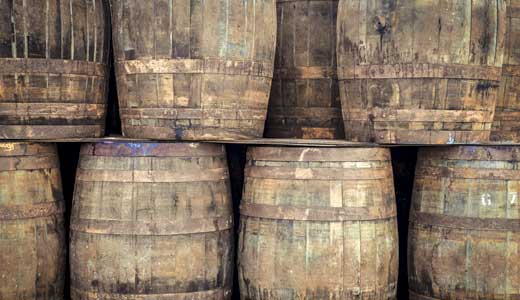 Before the bourbon you drink is ever put in a bottle, it is cut with a tall pour of water to put the fire out of the firewater. Except when it’s not.

Increasingly, some of the best-rated bourbons on the market are being bottled straight out of the barrel, without any palate-cushioning dilution. With names like Booker’s and George T. Stagg—just to name two—these pricey barrel-proof bourbons are attractive to consumers looking for something authentic and somewhat rare.

What they get is a distilled spirit that is between a fiery 120 and 140 proof. That’s 60 to 70 percent alcohol. Which begs the question: How are you supposed to drink this stuff?

According to the marketing for Blanton’s Straight from the Barrel—which shows a bottle labeled at 133.7 proof—the “high alcohol by volume is quickly forgotten once the complexity of rye, caramel, oak, honey and vanilla please your palate … Straight from the barrel is best served neat or with a splash of water. Un-filtered, un-cut, unbelievable.”

It should seem more unbelievable that a person would have the ability to discern rye, caramel, honey and vanilla in almost 67 percent alcohol. More likely you would taste “hints of fire” with “notes of pain” as you burn your palate into molten jelly.

“I always tell people that if you have bourbon that’s over 110 proof you really need to add water to it,” says Mike Veach, a bourbon expert and historian at the Filson Historical Society in Louisville. “Because when you get that high of a proof all you’re doing is killing your taste buds.”

Veach, who throughout the country teaches his Bourbon Academy that includes “eight hours of history and tasting,” prefers his bourbon neat. “But when I get something like [a barrel-proof whiskey], I will either add some ice cubes, and let them melt, or add a little water to bring the proof down.”

Knowing when to add water to your bourbon can be trickier than you think. You don’t want it to be too strong to taste, but you also don’t want to dilute too much flavor.

For the first half of the 20th century, one standard for quality bourbon had been in vogue since 1897, when Congress passed the Bottled in Bond Act to help distillers set minimum standards for their best whiskey. The rules: It had to be aged at least four years and bottled at 100 proof.

But in the 1950s and 1960s, distillers began lowering the proof to between 80 and 90 to meet a growing market for lower proof whiskeys, closer in alcohol-by-volume to scotch and Canadian whiskey. Not everyone was ready to abandon the earlier standards. Julian Van Winkle memorably refused to lower the proof of Old Fitzgerald, Veach says.

“He would say, ‘Add your own water,’” says Veach, also the author of “Kentucky Bourbon Whiskey: An American Heritage.” “Why would you want to pay me to ship you water? Plus, you’ll get more flavor from a bourbon bottled at 100 proof than one bottled at 86.”

Old Fitz wasn’t lowered to 86 until after Van Winkle died. But his concern about lost flavor is as valid today as it ever was.

According to Veach, “If you really prefer 80 proof, you would be better off buying 90 or 100 proof and getting more flavor. Unless you just don’t like flavor.”

But back to these barrel-proof monsters: How much water should you add?

Veach recalls a bourbon tasting almost 20 years ago at the historic Seelbach Hotel in Louisville. Jim Beam was launching its small-batch bourbon collection and sent master distiller Booker Noe, Beam’s grandson, and the whiskey writer Paul Pacult around the country to introduce it to collectors, connoisseurs, journalists and industry types. Among the collection was the distiller’s namesake, Booker’s, the barrel proof bourbon he created in 1988.

Pacult described the first three products—Knob Creek, Basil Hayden’s and Baker’s—offering all kinds of “fancy tasting notes.” But when he came to the Booker’s he said, “With Booker standing right here there is no way I’m going to be doing tasting notes on this product.”

That’s when Booker Noe stepped forward and said, “Well, when I drink my Booker’s I like it with water, about half and half.” He then dumped what was left in his water glass into the elegantly presented snifter of whiskey, stirred it and took a long pull. “And it’s good!”

Veach adds: “That was his tasting notes.”