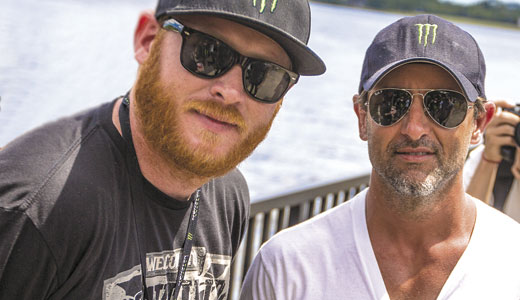 Danny Wimmer created the LOUDER THAN LIFE festival “to highlight and celebrate” Louisville, which he proclaims to be “the culinary capital of bourbon country.” The weekend festival will take place October 4 -5 and includes camping, 30 bands (including Kid Rock, Judas Priest, Korn Five Finger Death Punch, Limp Bizkit, Stone Temple Pilots and Papa Roach), 70 craft beer, bourbon and food vendors, and a lineup of celebrity chefs. I had a chance to ask Wimmer some details about the festival, including a little more info this whole ultimate “man” food aspect of the festival.

LEO: You’ve said that you fell in love with Louisville when you visited our fair city. When was that visit and what brought you to Louisville?

Danny Wimmer:  I didn’t come to Louisville to do a music festival.  I first visited the city over 2 years year ago doing research for a whiskey brand we are developing.  I have a great friend named Scott Frazier, who is a music manager who lives there, and he gave me a tour of the city and introduced me to Mike Maloney. I have to say, it’s the people I met along the way and their Southern charm that brought me here.

LEO: Where did you stay and what did you do, eat and see?

DW: I stayed at the 21c hotel, and along the way I stayed at the Brown and that’s where I had my first hot brown. Also enjoyed going to Doc Crow’s, RYE, Monkey Wrench, Momma’s, El Luchador and Sidebar.

LEO: What about the visit screamed “Louder than Life”?

DW: Everything. I don’t think people outside of Kentucky realize how progressive this city is.  Louisville already has some great festivals, but I felt there was opportunity to build an experience that highlights the connection between rock music and bourbon.

DW: This festival goes beyond tasting and emphasizes direct interaction with each brand. Each bourbon will have its own separate activation designed to highlight its style and uniqueness.  We don’t want you to just taste the bourbon, we want you to experience it through the eyes of the distiller.

DW: When I was teething my grandfather used to rub bourbon on my gums to take the pain away. LOL. All kidding aside, what’s exciting is how bourbon culture is exploding around the world. More and more restaurants and celebrity chefs are featuring bourbon on their specialty menus. I’m also noticing more women embracing bourbon as their drink of choice as well. It’s just a certain class that bourbon brings to the table.

LEO: So, being a music lover, a dedicated bourbon drinker, and devotee of my city’s food scene, I have to say that the festival description piqued my interest but also made me think it might be too much of a sausage fest for Whiskey Chicks and Bourbon Women like me. What would you say to other Louisville ladies who might be thinking through upside and downside of getting into a relationship with a festival showcasing gourmet MAN food?

DW: It’s not meant to be so literal and exclusive. It’s descriptive. It’s about powerful presentations and above average portions.  I promise that every man, woman and child will find something extraordinary about our food experience.

LEO: Anything you’re looking forward to doing outside of the festival when you’re back in the ‘ville?

DW: It’s become a home away from home. Every time I’m there I get a group of our new friends together to go and discover LOUISVILLE, from new restaurants, to all the distilleries, art galleries, etc.

LEO: Parting question, the experience of putting together this lineup of louder than life musicians, world-renowned distilleries, and celebrity chefs must be like a crazy festival in and of itself. Do you have funny behind-the-scenes anecdote you can share with LEO readers?

DW: Yes. Whose bright idea was it to name the food part of the festival a “Gourmet Man Food Experience?” Oh ya. Mine. LOL. It’s gonna be great. It’s gonna be fun. And all the bands are excited to be part of this first of its kind rock festival.