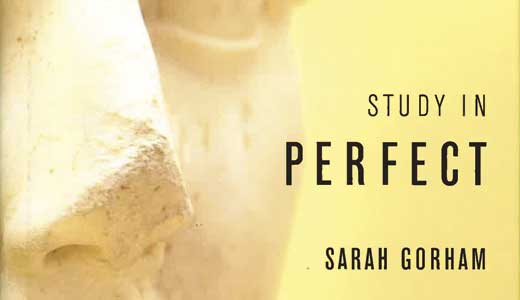 Sarah Gorham’s newly released collection of creative nonfiction, “Study in Perfect,” probes domestic life — her family’s move from their old Victorian home to a newly built modernist constuction; her relationship with her younger sister, Becky, born microcephalic, with “traces of cerebral palsy”; grief over her mother’s death; her daughter’s brush with death; and her family’s struggle with alcoholism. While Gorham’s voice is intimate, it is also philosophical, and the book’s organizing principle is an inquiry into the relationship between perfection and imperfection. The result is a deeply satisfying and rewarding read that draws on diverse discourses to contemplate our human capacity to conceive perfection despite relentless encounters with life’s many imperfections — disability, alcoholism and death, among them.

“For the last 12 years I spent half my writing time on poetry, half on prose, and usually alternated between the two,” Gorham says. “‘Study in Perfect’ was a transitional work that allowed me to forget line breaks, stretch out my line, and examine the subject from multiple angles. ‘Perfection’ (and ‘imperfection’) became the theme shortly after that.”

Gorham, who is the president and editor-in-chief at Sarabande Books, plays with the boundary between prose and poetry in prose poems  set between each essay. The first of these, “Perfect Word,” follows the introduction, while the book concludes with “Perfect Ending.”

In addition to blurring the boundary between poetry and prose, Gorham’s writing is wonderfully free from other traditional boundaries — the personal and intimate bump right up against linguistics, literary analysis, architectural theory and other academic discourses. “I believe that personal writing should engage the world of ideas, not focus exclusively on the rather claustrophobic inner self,” Gorham says. “My childhood journals gave me enough of that, none of which would be interesting to anyone else. It seems natural to write about architecture if I’m describing a new home constructed in the modernist tradition. Etymology too is endlessly fascinating. Think of all the history, the secrets hidden inside the words we use.”

Gorham says her “interest in the lyric essay coincided precisely with John D’Agata’s 1997 issue of the Seneca Review devoted to the form. It’s the reason we decided to expand our mission to include essay and from there, Sarabande’s first publication of a collection of lyric essays by Brenda Miller. I was reading this stuff for my own work and for Sarabande’s.”

In the essay “On Lying,” Gorham writes, “It’s all part of the effort to explain what I’m doing here, on earth.” Maybe that is ultimately the reason writers write and readers read; Gorham’s explanation is well worth the effort. The last prose poem, “Pefect Ending,” is one phrase — “Makes you want to begin, again.” And this book does just that.

You can hear Gorham read from “Study in Perfect,” winner of the AWP Award for Creative Nonfiction, Oct. 5 at Carmichael’s on Frankfort Avenue.