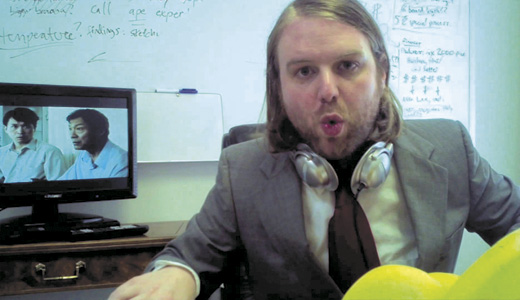 Howell Dawdy is the alias of Alex Smith, the mastermind behind Lydia Burrell, and the host of the “Probably Not” podcast. Recently, Smith’s efforts were recognized as his Howell Dawdy song “Fire Extinguisher” was nominated for Song of the Year by the Louisville Music Awards coming up this Sunday, and with good reason: “Fire Extinguisher” is an oddly compelling and catchy track that showcases not only his many talents, but his sharp wit too.

A motivated performer, Smith is prone to follow his muse. He admits, “Howell was a very spur-of-the-moment thing. The idea for ‘Fire Extinguisher’ popped into my head, I wrote and recorded it in an evening, made the video the next weekend, and put it out. I decided it would be a fun side project to try to release a video a month, which I did from January through July of last year. (I slowed down after that because it was eating up all of my time.)”

Smith makes no bones about the nature of his act. He explains of Howell Dawdy, “It’s comedy, but I’ve always appreciated comedy that has serious stuff going on in it. ‘Cool Dino Coat,’ for instance, is about a guy that only wants to do self-indulgent creative projects and hates dealing with society and the responsibilities of day-to-day life. He lists all this crazy stuff he’s doing to express himself and then says, ‘but it’s too crowded for me to express myself.’ I know that feeling, I CONSTANTLY feel that way, but I know it’s silly and self-absorbed, so the song makes fun of those feelings.”

For Smith, a good live show is a puzzle worth solving. He notes, “I feel like for years I played with this wall up between me and the people watching. Performing Howell songs live has changed that. I come out on stage and talk and interact with the crowd, so I have to be with them, not just in front of them. It’s the difference between showing someone a song and enjoying a song with someone. I think that’s affected the way I perform everything now.”