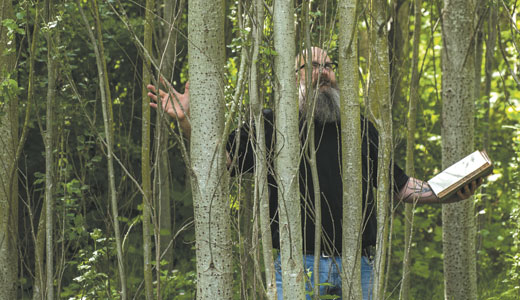 "Preaching to the Converted #2" by Bill Pusztai

I am not a Roman Catholic but I have friends who are. Through them, I’ve been exposed to bathtub Marys, framed colorized reproductions of Leonardo da Vinci’s “Last Supper” and rosary beads made from a variety of materials. Being an outsider let me see the rituals from a historical, not faith-based, point of view.

Bill Pusztai of Vancouver, British Columbia, is a fellow observer of religion. As a gay man, he’s been on a journey to find what faith speaks to him. In his first solo exhibition at garner narrative (and fourth time showing there), his photographs display his feelings on the subject. “Compassionately, I hope,” he says.

“When I was in my late teens, I read ‘Cutting Through Spiritual Materialism’ by Chögyam Trungpa,” states Pusztai. “It’s about acquiring religion or spirituality like a merit badge or a batch of holiday snaps to show everyone where you’ve been and what you’ve consumed. At the time it went right past me; I was on a collecting expedition that would last the next 20 years. I favored the exotic, having been disappointed by Christianity in many ways, not least, for condemning me as an abomination.”

In Catholicism, the phrase “our lady” refers to Mary, the mother of Jesus. His “Our Lady” series shows a statue of Mary nestled among all sort of things, as in “Our Lady of the Okra.” “Nuestra Senora de los Poblanos” – peppers. “Notre Dame des Poires” – pears. “Beata Maria Tulipa Tarda” – tulips. Note the different languages; his Mary travels and seems to be at home everywhere. “I am at last finding it in myself to react to Christianity with what I think of as compassion and integrity,” he explains.

The title of the exhibition comes from his “Preaching to the Converted” series of a preacher standing in fields of tall grass or in the woods. Nature is getting a sermon, with a Bible in one hand and the other palm up in praise.

The exhibition “Preaching to the Converted” also features two paintings by Angie Reed Garner. The works are striking for many reasons, including that they are quite large. But Garner fills up the canvas with color, action and thought-provoking imagery. “Thinking About Lost Cities” features a giant wave (reminiscent of the Japanese print “The Great Wave off Kanagawa”) posed to engulf buildings.

Not all artists can describe in words what they can say in art. Pusztai is articulate in both, resulting in worthy conversations full of intelligence and curiosity.