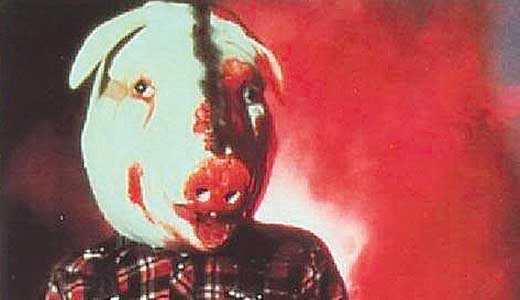 This sequel to 2011’s “Bunnyman,” about a chainsaw-killer (Joshua Lang) who wears a giant rabbit costume, is a slight step up from the original as he and his partner, Joe (David Scott, TV’s “His & Hers”), continue to kidnap and kill whatever jerk wanders into their midst, ultimately to become jerky in their roadside shop. By now even the sheriff has noticed some teens — and deputies — have gone missing, but the bigger threat to the pair is each other, as Bunnyman now generates mountains more, um, raw material than Joe can process. Helpful hint: Never tell a rabbit-clad maniac to pace himself.

Finally available on Blu-ray, one of the best horror films ever made. The great Western star Rory Calhoun came out of retirement just to play kindly cannibal “Farmer Vincent,” who fattens up the worthless dregs of society (including John “Cheers” Ratzenberger as a stoned-out drummer) to grind into sausage. Wicked satire on both city and country folk gets splattered all around, culminating in an hilarious “dueling chainsaws” climax you just gotta see! Remember: “It takes all kinds of critters to make Farmer Vincent’s fritters”; with greasy Wolfman Jack as the Rev. Billy. A must own.

While we miss the supernatural charm of Muppets creator Jim Henson, his heirs have crafted another perfect Muppets caper. This one finds the gang in Europe where a super-criminal impersonates Kermit — and Kermit finds himself in prison! Ricky Gervais is suitably over-the-top as the evil sidekick, and Tina Fey makes a fetching, wooly-hatted song-and-dance prison guard, with Ty “Modern Family” Burrell as a bumbling Interpol agent. But all you really need to know is “it’s a Muppet movie!” Buy it.

FROM THE NEW WORLD: COLLECTION 2

The final 12 episodes of a truly mind-bending anime series that is mysteriously all but unknown in America. A group of five kids, now teens, live in a green, tranquil utopian world of plenty in the far distant future. Or do they? Seemingly simple at first, this tale meticulously devolves into a terrifying fight for freedom, sanity and survival. As the friends age into their 20s, they learn of a devastating war that was wiped from the history books, and the secret behind those “cursed” with telekinetic powers. Simply awe-inspiring in scope; our highest recommendation — get both sets!

Hailee Steinfeld stars as, well, kind of an ass who sends forged love notes between her dad (Guy Pearce) and her housekeeper (mousy-looking Kristen Wiig). Both of the adults are seriously flawed, from Pearce’s years of drug abuse to Wiig’s painful past that prevents her from even imagining a future love. Nick Nolte rounds out the cast as the girl’s granddad, with help from Jennifer Jason Leigh and Christine Lahti. Sounds like a laugh riot, don’t it? A nice dramatic turn all around, with Wiig showing she can do more than comedy. From the chick-lit of Alice Monro.

WWE’s “Trinity” — scary, bodacious wrestler Stephanie Finochio — plays the hot-tempered hottie out for justice in this nicely low-rent and very satisfying actioner. She was a good cop, a Long Island detective who played by the rules until her brother was murdered and her mama got beaten. That’s when she went berserk, transforming into a wild and unpredictable, er, juggernaut of vengeance. Co-stars the always oily Eric Roberts, with Armand Assante and William Forsythe as “The Godfather.”

Mark Strong is the murderous Detroit detective in this now-defunct AMC original series based on the BBC miniseries of 2006. Thinking he’s pulled off the perfect crime, each week his machinations drag him deeper into the city’s underworld, corrupting everything around him. The cast is amazing, particularly Lennie James as the seemingly “bad” cop, James Ransone as the local mob boss and especially Sprague Grayden (“Sons of Anarchy”) as the mobster’s cruel and ambitious wife. AMC pulled the plug on this way too soon.

Based on the real life of Eric Lomax (Colin Firth) and his wife Patti (Nicole Kidman), whose world was shattered by the actions of a Japanese interpreter while Eric was in a prisoner-of-war camp. A generation later, she discovers the man is still alive and struggles whether or not to tell her husband. She eventually does (not a spoiler), knowing full well he will seek out and confront the man — or much worse. But will it bring her husband peace, or send him over the edge? Co-stars Jeremy Irvine as young Eric, with Stellan Skarsgård.

A wonderfully original and nicely icky bit of indie sci-fi. The future world of geeky/lonely John Ferguson is so messed up that people must insert parasitic worms in their ears to be able to dream, ignoring the side effects until the practice is outlawed by the government. Now they are willing to do whatever it takes to regain their fantasies — which, in his case, are centered around curly-haired “dream girl” Jes Mercer. Originally crafted in the Nashville 48-Hour Film Festival as an eight-minute short (included on the DVD), this full-length version has become an instant horror-film-fest hit. Worth your time.