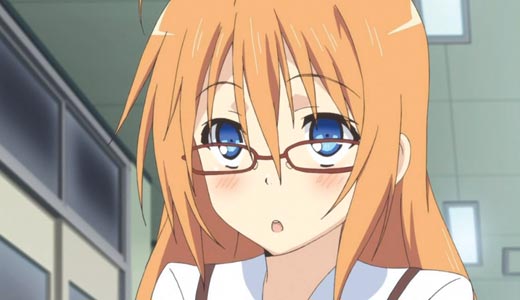 First a groundbreaking 12-volume book series, then a hit manga, this wildly popular anime series follows the misadventures of a young man who is clinically afraid of women, and a young woman who disguises herself as a man to obtain employment. Thrown together by fate, they agree to help each other. Much of the humor – and the tease – comes from the rigid codes of Japanese society, while the master/servant elements clearly suggest dom-sub fetishism. Throw in a sadistic hot bitch, the requisite scantily-clad ass-kicking females, a great theme song and a sexual fantasy or three, and you’ve got one very satisfying bunch of cartoons.

The great thing about Spidey is that he is so relatable: the things that happen to him are just like the things that happen to you – magnified 10,000 times – and only his sense of humor saves him from going over the edge. The latest film incarnation of the webcrawler celebrates this fact, keeping the pace light and breezy, upbeat and fun, even as the world goes very dark. Geeky Andrew Garfield returns as the webslinger, with Emma Stone as Gwen, and Dane DeHaan as an increasingly evil Harry Osborn. We thought Jamie Foxx was wasted as Electro, but that’s a minor quibble. Felicity Jones makes fine eye candy and Paul Giamatti goes completely off the rails as the rampaging Rhino-in-training. Too much fun.

John Turturro from the first “Transformers” films has the unimaginable balls to write, direct and star in this flick – and hire Woody Allen as his co-star! He plays an aging self-styled Lady’s Man who decides to become professional at it in order to help his best friend (Allen). What ensues is a nicely goofy mix of love, sex, money, and great friendship, reminiscent of sophisticated, sex- comedies from the days of Marilyn Monroe and Cary Grant. And with a cast that includes Sharon Stone (who still looks great), Sofía Vergara, French eyeful Vanessa Paradis, and Liev Schreiber, there’s plenty of fun to go ‘round. Worth your time.

Season 10 marked the eventual midway point in this show’s amazing career, and yet it was still as fresh and relevant as ever. The episode “Take Her, She’s Cheap” is a perfect example, with Marshall Matt Dillon (big James Arness) forced to deal with a shiftless, lazy family who decides that Matt would be the perfect husband for their young daughter, the lovely Lauri Peters. Matt will have none of it, of course, causing the love-struck girl to wander into the hands of a bad-guy (fantastic-TV stalwart Willard Sage). He, as they say, “uses her in a bad way”, forcing Matt to dispense some whoop-ass frontier justice. Timeless entertainment.

HOME IS WHERE THE HEART IS

Originally titled, “Watercolor Postcards”, this minor, if erstwhile drama set in a rural Texas town, follows 10-year old Cotton (Bailee “Once Upon a Time” Madison) and her adult friend Butch (Conrad Goode), who sells hand-painted postcards by the side of the road. Then her sister, blonde stunner Laura Bell Bundy (“Hart of Dixie”) shows up. Uh oh.

I AM HAPPINESS ON EARTH

Famed out-there Mexican filmmaker Julián Hernández (“Broken Sky”) returns with this incredibly popular, artsy, navel-gazing Gay look at obsession and the passion of the artiste. Mexican-TV vet Hugo Catalán plays a film director who becomes so focused on his latest project that he loses all grip on reality, to the point that his life begins to merge with that of the film. Of course, since he’s the director that sort of makes him God, doesn’t it? Lots of ways to interpret all this, but it’s the journey that matters, not the destination.

Here’s a fun little 80s soggy stinker that came out about the same time as James Cameron’s “The Abyss”, with elements of “Alien,” “The Thing,” and “Jaws” for extra texture. Peter Weller, Richard Crenna, Amanda Pays, Daniel Stern, Ernie “Ghostbusters” Hudson, and blonde steamer Lisa Eilbacher are trapped at the bottom of the ocean with a genetically-diddled-with hostile lifeform. So the women hit the showers(!), while the men break out the … flamethrowers! Excellent live-action special effects – no crappy CGI – and Meg Foster uses her beautifully cold eyes to great effect as a spokesperson on a video screen. Stupid, if damned entertaining; now on Blu-Ray.

Yes, it’s another stay at the quaint little Vermont inn of Bob Newhart and Mary Frann. This season started off with one of the best episodes of the entire series (and that’s saying a lot!), when Bob fills in for “Pirate Pete”, the host of a local kid’s show (played by the always welcome David “The Mad Hatter” Wayne), only to discover that the show is just one long commercial! Heavens!, who could imagine such a thing?! Mocked by snarky puppets, he has a meltdown on camera, getting the show canceled. Brilliant comedy with Tom Poston, Julia Duffy, and Peter Scolari.

Auteur/Director Jim Jarmusch looks at the future of the human soul through a pair of centuries- old vampire lovers played by Tom “Loki” Hiddleston and Tilda “The Grand Budapest Hotel” Swinton. They quietly survive the years, having evolved beyond the need to kill, occasionally reuniting to renew their love and weep for the dissolution of Man. But this may be their final tryst as he’s tired of living and ready to end his life. That’s when she shows up with her crazy-hot little sister (Mia Wasikowska) in tow, whose boundless lust for thrills threatens everyone around her. Simply amazing; with Anton Yelchin, John Hurt and Jeffrey Wright.

It was our good friend Dave Conover (author of “War Eagles”, et.al.) Who first told us about “Bronies”: Grown men obsessed with all things “My Little Pony.” This doc follows longtime voiceover artist Ashleigh Bell, recently hired for the 4th generation of MLP, as she learns to tread a celebrity minefield of truly bizarre fans – all of them men wearing rainbow wigs, makeup, and little horsie-ears. Her terrific sense of humor and honest affection helps her get through the weirdness to discover a surprising truth underneath. Don’t miss this.

An uneven and less-than-perfect, if darkly mystical, horror outing that nonetheless entertains. Attractive Daisy Keeping plays an American teen, visiting her dad in Italy, who becomes entangled with a group of oo-wee-ooo “missing” children and a legendary “Lake Of Idols” with supposed great healing powers. Following the kids leads her to ever more shocking discoveries, culminating in … well, we won’t spoil it. Not the best movie ever made, but worth a look.

THE GIRL ON THE TRAIN

Nicki Aycox of “Cold Case” shines as the mysterious and beautiful woman who crosses paths with a doc filmmaker (Henry Ian Cusick from “Lost”), beguiling him to assist in a very personal errand. Soon he finds himself explaining to detective Stephen Lang (TV’s “Salem”) how he found himself duct-taped – and his hands nailed! – to a chair. Oh, and there are two dead guys on the floor. Wonderful storytelling and a brilliant use of language; one of the best psychological thrillers of recent memory..

A slow-burning found-footage thriller about a pair of filmmakers who travel abroad to document a utopian community called Eden Parish, run by “Father” (Gene Jones, “No Country For Old Men”). Everything seems blissful at first – if a little dictatorial – until it becomes apparent that Father has more loose screws than a Ford ignition lock. By that time, of course, they are in a fight for their lives. Written and directed by Ti West of “Cabin Fever 2: Spring Fever”, “The ABCs of Death” and “V/H/S.” Chilling.