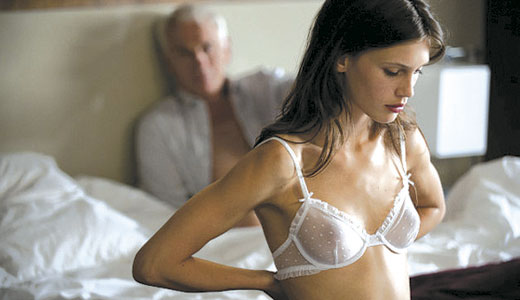 This wildly popular German indie drama based on real events finally makes it our shores. While traveling across Cambodia, recent grad David Kross meets intoxicating barmaid-and-maybe-hooker Apinya Sakuljaroensuk. Romance ensues and love blooms, even as he discovers that she is HIV Positive. An international hit due to the wrenching true storyline and the undeniable chemistry between the two leads.

Aka, “Remnants,” latest in the seemingly endless string of “desperate apocalypse survivors struggling to, er, survive” indies of recent vintage – but one of the better ones. Edward Furlong, Monica “Private Practice” Keena, Billy Baldwin, and Andre “The Wire” Royo come to realize that they must make a choice: sit where they are and eventually starve, or take their chances in the broken and unimaginable world outside.

Adam Sandler and Drew Barrymore, who once made movie magic (“The Wedding Singer”), are older now, each playing parents to their own raucous broods, yet still looking for love in this so-so comedy. After the worst blind date in history they part ways, only to wind up reluctantly sharing a suite at a luxury resort … in Africa. That’s where the pratfalls kick into high gear. Barrymore is her usual winsome self, and Sandler is, well, Sandler, so you know what to expect.

This Austrian eco-horror-thriller/monsterfest (originally, “Blutgletsche”) deserves a look. A mysterious red liquid begins leaking from a glacier, which is melting due to – DUNT DUNT DUNNNN! – Global Warming. Meanwhile, the local wildlife begins behaving badly, then changes in more physical ways. Scientists working at the glacier suddenly find themselves in a battle for survival against really cool and nicely weird mutant life forms. Ick! A damned-entertaining throwback to those pre-CGI days of physically gloppy monsters a la John Carpenter’s “The Thing” – and damned funny, too. Our kinda flick.

The title is Italian for “Female Detective,” the story of Inspector Lisa Milani (Lucrezia Lante della Rovere), a damned-good – and let’s just say it: damned good-looking – 40-something cop, trying to solve crimes, raise her kids, reign in a roving husband, and carve out a career in the high-pressure, testosterone-fueled world of Italian law enforcement. But the best thing is, this isn’t a “cop show”: it is an intense human drama about someone trying to lead a “normal” life (whatever that is) while the world plots against them. Relatable, exciting and addictive, with Manuela “Yowza” Maletta as the daughter.

Most Euro cop shows are dark, gritty dramas featuring hard men prowling urine-soaked alleyways, so this one is a real treat: a lighthearted spree that takes place in the sunny, manicured ‘burbs, led by the attractive pair of Caroline Catz (“Doc Martin”) and Lisa Faulkner (“MI-5”). Yes, they are your basic mismatched cops – bickering comically, bouncing great one-liners off each other, and sexy to boot – but that’s what makes them so good at solving murders most foul. It’s a shame that the BBC had to end this after only two seasons; the stars were simply too sought after to hold back.

We don’t see enough Jesse Eisenberg these days, so this flick goes the extra mile by giving us two of him. Quiet and awkward, he yearns for the attentions of Mia Wasikowska (stand in line, pal) while hating his asshole boss, Wallace Shawn. But what he really hates is his own wimpy self. And then he meets a new co-worker – who looks exactly like himself, only strong, powerful and completely in-charge. The doppelganger soon takes over what little life he had in the first place, leading to … Well, we won’t spoil it. Not perfect, but a very entertaining film filled with underused actors; based on a Dostoevsky novel.

Affable Clark Gregg (Marvel’s Agent Coulson) plays a truly nice guy in a very bad city. He’s the less-then-successful child-actor agent, married to Amanda Peet, who discovers little Saxon Sharbino (“Touch”) and dreams of great things. What could go wrong other than family, producers, directors, other agents, and the girl herself? A fun little film with terrific guests like Felicity Huffman, Allison Janney, William H. Macy, Niecy “Reno 911” Nash, slimy Sam Rockwell, and Molly Shannon. How could this not be a hoot?

WELCOME BACK, KOTTER: THE COMPLETE SERIES

Wow! What a time to be alive! After almost 40 years, “Welcome Back Kotter”, the groundbreaking urban comedy hit that launched the career of John Travolta, is finally available in a complete box-set. Gabe Kaplan, of course, stars as Mr. Kotter, a former “Sweat Hog” – a crude and unteachable student at a run-down inner-city high school – who returns as an adult to teach the latest crop of miscreants, including Vinnie Barbarino (Travolta). Too many great cultural touchstones and classic bits to mention, but it’s worth buying if only for the terrific John Sebastian theme song. An absolute must-own for any fan of classic TV.

Timothy Spall (Harry Potter’s “Wormtongue”) returns as Lord Clarence Emsworth, that penniless, pig-loving Earl of Blandings, in this laugh-out-loud low-brow Limey series based on the immortal works of P.G. Wodehouse. This season starts off with a bang as the Duke of Dunstable (crazed Limey comic Harry Enfield, who hilariously threatens Spall with a fireplace poker!) accuses the Earl of “abject pottiness” — a very British term meaning ”a looney drunken layabout of no importance” (we call them Senators) — leading to an egg-throwing social dust-up. Funny as hell.

Aka, “Führerkult und Größenwahn – Das Parteitagsgelände in Nürnberg”, this short doc from German Spiegel TV explores the Nazis’ most “holy” sites in Nuremberg, structures of such size and grandeur that Hitler boasted they would dwarf the pyramids in the eyes of future men. Largely the work of architect Albert Speer, today much of that city is literally crumbling under its own weight, with massive blocks of stone threatening to crush the curious throngs who are inexplicably drawn to it. Begs the question, “What if he had used his power for good?”

A mad 2+ hour compilation of blood-soaked, skin-revealing trailers from those now-forgotten grindhouse classics of the 60s and 70s. Of course, while the originals may be forgotten, many of today’s best moviemakers – Tarantino, Roth, Zombie, etc. – are committed to keeping the genre alive and screaming. See their inspiration here in all it’s scratchy, uncut, prurient glory. Ballyhoo at its best.

Better known as “Il Commissario Manara”, this wildly sexy charmer from Italy follows the exploits of mustachioed Luca Manara (Guido Caprino): cop, lady’s man, dark-eyed rogue. Missing the excitement of the city, he spends his days chafing at the bucolic stillness of Tuscany. There he solves crimes with the help of an old academy buddy (smokin’ Roberta Giarrusso) and her earthy aunt (Euro-TV stalwart Valeria Valeri, who is a treat). Funny, sexy, swashbuckling at times, warm and winsome at others, and above all, smart; this is one of the most entertaining shows we’ve ever seen. Buy them both.

Why were newlywed couples once required to have a priest put them to bed on their wedding night (other than he was a perv)? That and many other interesting bits of history – still echoing in our so-called “modern” age – fill this 3-part edutainment offering from Dr. Helen Castor. The answers usually center around the Roman Catholic control-freak church, whose centuries-long stranglehold on Europe was finally broken by the Protestants. Whether the topic is Birth, Death or Marriage, this is a fascinating and thoroughly mesmerizing walk through the roots of our culture.

Frankly, we’d come to think of show creator Donald Bellisario’s recent TV efforts as “Granny Porn”: silver-haired lead actors and a stream of aging guest stars argue wisely, then shuffle into the obligatory action finales after the youngsters have done all the work. But NCIS:LA is an NCIS for the rest of us, set in SoCal where there’s so much crime that the real police need military protection! This season begins with a search for stolen nukes, a plot continued from last season. Lots of action with pretty boy Chris O’Donnell, Peter Cambor, LL Cool J and bulbous Esquire hottie Daniela Ruah as I. Candy.

You can’t argue with success, and this series has certainly been successful. This season, Mark Harmon, David McCallum, Michael Weatherly, Pauley “Bangs Like Bettie Page” Perrette, and a weekly stream of guest stars – an inordinate number of whom seem to die after a few episodes – battle an invisible, unknown assassin who is targeting the NCIS team. Our favorite episode, though, involves a suicidal pilot aiming to Kamikaze his plane into a Navy vessel while the NCIS gang seeks help on a band’s Twitter account.

There are a number of reasons you should run out and get this low-budget/high-concept bunch of nonsense – not the least of which is that it involves WWII pilots battling flying Nazi dragons in dogfights over Africa! The special effects are, well, “special”, the cast is heavy with 3rd-tier jarheads, and the script has some of the most cringe-worthy howler-lines in recent memory. But the best reason to watch is Stephanie Beran, who uses her steely eyes to great effect. Very entertaining; worth your time.

THE LEGEND OF HELL HOUSE

THE MEN FROM SHILOH: SPECIAL EDITION

If that TV title doesn’t ring a bell, it was an attempt to create a sequel/spinoff/extension to the genre-defying 8-season success of “The Virginian.” Set a decade later, circa 1900, with the Shiloh ranch now owned by Colonel MacKenzie (Stewart Granger), cowboys James Drury and Doug McClure continue to pursue their pleasurable, adventurous pursuits in and around Medicine Bow, WY. The result is 24 terrific episodes of comic/dramatic Oater action, now available with an entire disc full of bonus goodies (including an interview with Clu Gulager who fought zombies in “Louisville” in 1985’s “Return Of the Living Dead”).

For the first time, Rick (Andrew Lincoln) and company may have caught a break: The former prison they are living in has kept them safe from the Walkers outside, and supplies are fairly good thanks to a nearby Army base. That only leaves the real horror – each other – to deal with. If all goes to hell, of course, with an unknown virus adding to their troubles, and The Governor (David Morrissey) once again destabilizing everything by mid-season. The real stars – the zombies – take advantage of all this chaos to prove, as Jean-Paul Sartre famously wrote, “Hell is other people.”

The Japanese “romance game” craze swept through that nation’s adolescents during the early 2000’s, spawning this hit anime series shortly thereafter. The comic action took place in a performing arts academy where a new student dreams of composing songs for her beloved pop idol. But the school bans romance between the students (or their teachers, or their resident idols), which just makes it harder for her to concentrate on her music. That first season is still available as “Uta No Prince Sama 1000%”; today’s release is the second season, with a third planned for 2015. Goofy, exuberant fun unlike anything seen on US TV.