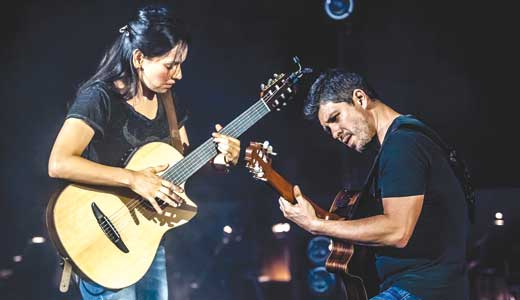 Two acoustic guitarists must mean a folkie concert, right? Wrong, at least when the musicians in question are Rodrigo Sanchez and Gabriella Quintero, whose shared love of — wait for it — heavy metal music informs their concept. They grew up in Mexico City and came to the attention of many while busking in Dublin, Ireland. They haven’t played Louisville since their 2010 concert at the Brown Theatre, and they look forward to playing outdoors at the Iroquois Amphitheater on Sunday. In 2010, they were touring in support of 11:11, which featured their original tributes to 11 musical influences, ranging from Jimi Hendrix to Astor Piazzolla. The new release, 9 Dead Alive, continues the tribute concept, albeit in the context of world figures from many disciplines and cultures, including figures as disparate as Eleanor of Aquitaine, Harriet Tubman and Fyodor Dostoyevsky.

“We had a list of 50 people. We could have had thousands of people,” says Sanchez. “The idea was to come up with these people we consider to have left a legacy among us still alive. We had a lot of the obvious names, the usual suspects like Gandhi and Martin Luther King, but people should know them already. I tried to come up with someone not so famous in different areas of the world.”
Sanchez continues, “Dostoyevsky is kind of a universal name, but he gave me the idea. I was rereading ‘Crime and Punishment’ at the time, and that’s how I came up with the idea, so I decided to leave him in there. But the rest of the names, if you ask the average American or Mexican guy who (Norwegian explorer and 1922 Nobel Peace Prize winner) Fridtjof Nansen was, probably a lot of people wouldn’t know who he was, or if you ask a Norwegian guy who Harriet Tubman was, he probably wouldn’t know. So we wanted to bring this information to people to make them realize how beautiful a legacy they left.”
The songs came first, though not the specific dedications. “We named the songs after they were made. It’s like having a baby and naming the baby once it’s born.” In composing, he says, “For the album, there’s no room for improvisation, everything is kind of fixed. But when we transport the album to the live shows, we have the space to create something different every night, so we won’t get bored. We stick to the original structure and add room for improvisation in spaces that wouldn’t affect the structure of the song. A lot of people want to listen to what they have heard on the album. Coming from a metal background myself, I grew up that way. But as a musician on stage, I feel the need sometimes to break into something different. Playing exactly the same every night makes you crazy. You have to find a balance between what you enjoy and what people enjoy. Otherwise, if you do too much improv, like a jazz player, especially in more popular kind of music like we do, people get bored.”
Not only is the music entrancing, so too is the visual presentation of their album. “We worked very closely with Eugene Serebrennikov, an American artist who has been doing art with real vinyl records. He goes to a facility where he can cut them in different shapes. We liked his work, and we explained the concept of the album. We worked together, but he’s the artist, and he came up with the final concept for the art. Some of the shows we’ve done, we are able to show the original works to people, and somewhere we’re going to auction them for charity.”
Sanchez says playing outdoors or indoors doesn’t impact the planning for their concerts. “The crowd kind of leads the whole thing. We try to give them the best time. Sometimes people enjoy just listening without participating that much. Other times, they prefer to dance. We normally play to rock crowds. Some people will be surprised at the energy, because this is a rock ’n’ roll show, not a classical guitar show. It’s important for people to eventually understand what the show is about.”
Sanchez adds, “We are very conscious of how lucky we are. We do what we want to do, and we are there to give 100 percent. It’s not about us, it’s about the whole event, and hopefully we all together have a great time.”