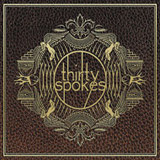 With the release of their self-titled album, Thirty Spokes proves adept at their craft befitting a working band with four albums under their belt. There is a soulfulness, or at least the pretense of such, that threads throughout the entire album, which sees the group balancing between delicate college alt-radio numbers, and up tempo blues infused rock, with a little funk element thrown in. What you’ll find here is music that is the generally acoustic (or at least largely unaffected) instrumentation on the album, which privilege ripping leads and radio-friendly lyrics to convey the point. Steeped in tradition, their music is like the Dave Matthews Band, albeit with a little more country, and less nasally voice. Thirty Spokes make music that seems apt for the soundtrack of TV’s "Nashville," vaguely Americana in nature, replete with nostalgic lyrics that try to pull at your heartstrings.