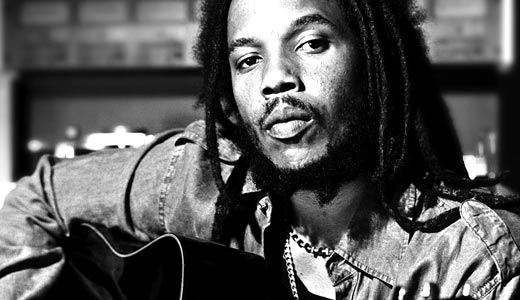 <music>
Wednesday, Aug. 13
Stephen Marley
Mercury Ballroom
611 South 4th Street
mercuryballroom.com
$25; 8 p.m.
This is a show of true music royalty. Reggae star Stephen Marley is one of Bob Marley’s five children with his wife Rita. After making several albums with his siblings in Melody Makers, later renamed to Ziggy Marley and the Music Makers, Stephen has carved out a respectable career on his own. The Wilmington, Delaware, native produced two Best Reggae Album Grammy-winning records for his brother Damien and has written and recorded three of his own. His musical style is inspired by that of his father and siblings, but not without his own unique flair. He has worked with the likes of Mos Def and Wale to make his music more modern. This should be a great end-of-summer show. — Ian Ording

It’s August in Louisville, which means it is toasty outside. If there is ever a time to put down the bourbon, it’s this Thursday evening at Captain’s Quarters. Bartenders from many of Louisville’s finest bars and restaurants will be battling for the title of Best Margarita featuring el Jimador tequila and Finest Call. Sample 14 margaritas riverside, watching the boats cruise the Ohio River in the sunset. Plus, we wouldn’t throw an event if we didn’t think it would be one of Louisville’s 10 best this week! Margarita makers include Amy Z’s, Boombozz Taphouse, Chuy’s, Diamond Pub-St. Matthews & Highlands, Dragon King’s Daughter-New Albany, Drakes, Eiderdown, Loui Loui’s Detroit Style Pizza, Mellow Mushroom-St. Matthews, Nachbar, Napa River Grill, Ramiro’s, Tumbleweed, Village Anchor & Wild Rita’s. –Aaron Yarmuth

<art>
Aug. 14 – Sept. 27
‘Evolving” by Debra Lott
PYRO Gallery
909 E. Market St., 587-0106
Pyrogallery.com
Hands are one of the hardest working features of the human body. With them, we can hold a peach, pick a flower or gesture to the driver who just cut us off. These expressive packages of bones and flesh at the end of our arms are also hard to draw correctly.

Debra Lott’s paintings and drawings capture the power of hands. An artist of talent and technique, Lott is at her best when illustrating emotion from what initially looks like a figure study. Her series “Forever Friends” illustrates what she says are “the lines and scars on her subject’s skin (that) provide clues to their life journeys.”

<music>
Thursday, Aug. 14
Dangers, Graf Orlock, HOLY, Falter, WOLFxPISS
Haymarket Whiskey Bar
331 East Market Street
Haymarketwhiskeybar.com
$12; 6 p.m. – 11 p.m.
With their name taken from the 1922 silent film “Nosferatu,” Graf Orlock set out with a mission, from their very name on, to infuse heavy-collision-prone grind bursts with a cinematic tone and texture, which comes courtesy of their extended use of action and sci-fi film samples within their music. They’ve remained just as lethal now as when they began 11 years ago, a truly ruthless band. Joining them are noisy punk rock group Dangers, who bring a sometimes somber variety to what looks to be a raucous event. Promising Milwaukee assaulters, Falter shines with a grim, murky atmosphere lining their d-beat hardcore hymns that’s not to be missed. Rounding out the evening’s speed-addled focus are WOLFxPISS and Italian crust experts HOLY, who know a thing or two about causing an uproar. Come grind your heart out. –Austin Weber

<fundraiser>
Friday, Aug.15
Birds & Bees Bash
The Olmstead
3701 Frankfort Ave.
ppink.org, (317) 637-4170
7-10 p.m.
Having been to this Bash in the past, I can tell you, it’s not all business. Cocktail hour with a silent auction featuring travel and event packages, and tickets to sporting and cultural events, as well as special dining opportunities ensure that there is work and play at the Birds and Bees.

All proceeds from the 15th edition of this annual fundraising event will support PPINK’s education programs in Kentucky, in particular, TeenREACH, a Planned Parenthood peer-education program based in Louisville that provides critical health and reproductive education services. Last year Planned Parenthood of Indiana and Kentucky (PPINK) provided health services to more than 5,000 men, women and teens in Kentucky, and reached approximately 2,700 through its education efforts. –Aaron Yarmuth

<art>
Aug. 16 – Sept. 11
“The New Synthesis” by Matt Weir
Revelry Boutique Gallery
742 E. Market St., 414-1278
www.revelrygallery.com
You have to be intrigued by an artist who says his sculptures are “contemporary works on nature and behavior.” And you should want to visit a gallery that displays such works.

Revelry Boutique Gallery is getting ready to celebrate its four years of existence, first on Barret Avenue and now on E. Market Street. To do this, the gallery is presenting us with the gift – the chance to see the latest cerebral works of Matt Weir in “The New Synthesis.” He will debut “Saddle Points” (he describes it as “mathematical and philosophical”) and “Flop” (six years in the making). Expect the usual media (Indiana limestone, graphite drawings) as well as the unexpected (3D printing synthetics). The Aug. 16 opening includes refreshments and music. –Jo Anne Triplett

<culture>
Saturday, Aug.16
An Evening with Bill Maher
Whitney Hall, Kentucky Center for the Arts
501 West Main St.
Kentuckycenter.org
$35&up; 8 p.m.
The host of HBO’s “Real Time with Bill Maher” is coming to Louisville. Not sure if I need say more. But, in case you don’t know, Bill Maher has been a stand-up comedian for more than three decades, political commentator and satirist, best-selling author, as well as producer and star of “Religulous,” the outrageously funny documentary film exploration into the depths of organized religion in America. Saturday is your opportunity to witness the genius of one of the wittiest minds in American political commentary, and if his stand-up show is anything like “Real Time,” there will be more than one memorable moment. Oh, and, Maher’s show is on HBO for a reason, so if you would prefer your child, date or immature friend not be exposed to “certain” language, you might leave them at home. –Brent Owen

<Music>
Saturday, Aug. 16
One More Time: A Tribute to Daft Punk
Mercury Ballroom
611 South 4th Street
mercuryballroom.com
$15; 9 p.m.
I don’t want to get anyone too excited, but Daft Punk might be playing in Louisville. Now, they’re probably not, and these fellas performing under the name One More Time could be a very authentic Daft Punk tribute band like they say they are. But they have the helmets. They have the stage. They have the groovy jams. The real Daft Punk could be tricking us all. But even if they’re not (they’re definitely not) you would be forgiven for mistaking One More Time for the real thing. This duo plays a raucous set that’s extremely reminiscent of the French pair’s live show, and considering Daft’s recent extended hiatus from concerts, this is probably the most Daft Punk you’ll get for the foreseeable future. Especially if it actually is Daft Punk. It’s not. But it might be. Who knows.– Ian Ording

<art>
Through August
Richard Kolb of Yardbirds
Gallery 104
104 E. Main St., La Grange, 222-3822
www.gallery104.org
I am the proud owner of a “Scaredy Cat.” This small animal composed of metal who-knows-what-that-is constantly makes me smile. Richard Kolb’s Louisville art company, Yardbirds, is a warehouse of scrap metal that he manages to rematerialize as a dog, cat, bird or what he calls a “critter.” “My menagerie … now includes more than 1,000 designs,” he says. “I try my hardest to use recycled, discarded, overrun and reject parts … (including) garden tools, car parts, farm implements, bicycle parts and mufflers. Many people have fun identifying the parts … and they marvel at the way a simple tilt of a head can give a sculpture so much personality.” Gallery 104 will be showing, as well as selling, Kolb’s metal barnyard of animals through August. –Jo Anne Triplett

<art>
Through Sept. 30
Honky Tonk: Photographs by Henry Horenstein
Paul Paletti Gallery
713 East Market Street, 589-9254
paulpalettigallery.com
Honky Tonk is not a collection of pictures of country concerts and their attendees; it is a history of country music in America. Henry Horenstein grew up in Massachusetts (a seemingly unlikely place for a fandom of country to develop) and then pursued a degree in history at the University of Chicago. While there, an interest in photography blossomed and he sought to blend his love of recording history and the artistry of the camera. To do this, he has spent years traveling the nation to all sorts of country shows and events, where he has pictured the likes of Dolly Parton, Del Reeves, Doc Watson and many of the folks who came out to the shows. He says this has been his way of recording the history of a culture that is fading in increasingly modern times. There will be a reception with Horenstein September 4 at 5 p.m. –Ian Ording