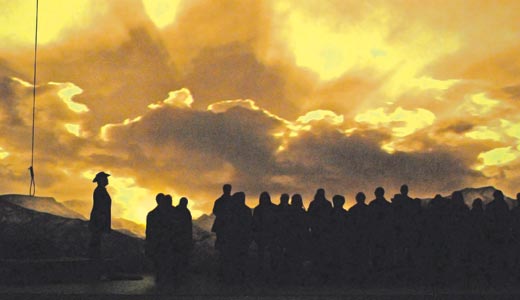 It’s a good bet that more than one opera fan has wondered why the Puccini opera “The Girl of the Golden West” – or La Fanciulla del West, as the Italian composer named it – is so seldom performed. Especially in the United States, the home of the grand western saga. The opera isn’t at all obscure. Everybody’s heard of it. But few have ever seen it performed.

And it’s kind of a mystery why. It’s got a terrific title. From a story by Bret Harte. Music by Puccini. How could it miss? Plus a triumphant opening night in 1910, when Giacomo Puccini, himself, arrived from Italy to be on hand as Arturo Toscanini took the baton for the world premier of “The Girl of the Golden West” at the Metropolitan Opera in New York.

But wait no longer. Kentucky Opera has carded “The Girl” as one of its three major subscription performances of the 2014-15 season – with two other operas that have rarely, if ever, been produced in Louisville – and seldom nationally. Also on tap is Beethoven’s “Fidelio,” which leads off the series on Sept. 19 and 21. “Girl of the Golden West” runs Nov. 14 and 16. Then, Feb. 13 and 15, the company presents “A Streetcar Named Desire,” Andre Previn’s operatic take on the famous classic of American stage and screen.

So what in the world has been holding “The Girl of the Golden West” back all these years? Is it just too much for American audiences to swallow a western sung in Italian? Is it shunned by Europeans because it lacks an unhappy ending?

Kentucky Opera director David Roth concedes those could be contributing factors, but he suspects the main reason “The Girl of the Golden West” is so seldom sung is it’s almost too big to put on stage – set in a gold mining camp high in the vista-rich the Sierra Nevada mountains of California.

“The piece requires three epic sets, each quite expansive, and each quite distinct,” says Roth. “What we are doing is working with Nashville Opera, which produced “Girl of the Golden West” in 2012, using high-tech rear projections – giving the production a very cinematic quality. When you hear the Puccini score you might actually think of later film composers, sketching through the music these epic journeys – creating this mining town up in the High Sierras.

“What we have,” explains Roth, “is three big scenes. Minnie’s tavern is the first one, and it has to be expansive, with ten principal singers and a chorus.” (Plus Minnie, the saloon owner, who will fall in love with Dick Johnson.) “Act Two,” says Roth, “is set in Minnie’s cabin, the smallest and easiest of the sets. But you still want to see the Sierra snow coming down outside the windows. Then the final set is high up on a mountain vista – where the cinematic screen projections add a feel of vastness and mountain majesty.”

“Fidelio” is Beethoven’s only opera, and one would think it’d been staged many times here over the years. But Roth found that “Fidelio” had last been programmed in Louisville in 1981, in the late Thomson Smillie’s first full season as Kentucky Opera director.

Beethoven penned “Fidelio” in 1805 as the composer entered his “middle period,” when he found his “heroic symphonic voice, with the third (Eroica) through eighth symphonies.

“What you hear in “Fidelio” is not just the triumph of heroism over tyranny, but the beginnings of the Romantic idea of conflict. That’s what you hear so much in Beethoven’s music, this battle of wills, and a triumphant resolution at the end – Beethoven leaving classicism behind and moving into this much more emotional compositional style.”

That shows through perfectly in “Fidelio,” with its heroine Leonora struggling to free her lover Florestan from unjust imprisonment.

Over a period of years, Beethoven wrote four overtures for the opera: three called “Leonore,” and the last “Fidelio.” They’re all wonderful and familiar stand-alone symphonic favorites. The “Fidelio” overture now leads off the opera, with the third “Leonore” played later by the orchestra.

Previn, a master composer and arranger, is most familiar to audiences for his movie soundtracks and as a television host conductor. His “Streetcar Named Desire” was premiered in 1995 by the San Francisco Opera, but was not a success – though critics liked the music, and especially the singing of young star Renee Fleming. Recently, Kentucky Opera teamed with the Santa Barbara Opera and San Francisco’s Merola Opera Program to re-imagine the production, and Kentucky Opera’s staging with director Jose Maria Condemi will be one of its first national revivals.

Beyond its subscription series, Kentucky Opera will stage a new opera called “A Woman in Morocco,” May 15 and 17 at Actors Theatre’s Victor Jory Theatre as a part of Louisville’s annual “Festival of Faiths.” The performance is a component of the Composer in Residence program conducted by Kentucky Opera and the University of Louisville School of Music – with composer Daron Hagen on hand to work with U of L students and Kentucky Opera singers, all learning about the art of the opera.

“I believe we have a responsibility to move this opera art form forward,” says Roth. “That’s what we’re doing with the Composer Workshop – partnering with the University of Louisville School of Music. Showcasing and presenting new composers, and developing new works.”

While also bringing to the stage established works that have long lain down the road less traveled. “Puccini’s ‘Girl of the Golden West’ is one example of that, says Roth. “Classic operas that have not been given air time by Kentucky Opera – but that our audience is now ready to experience.”