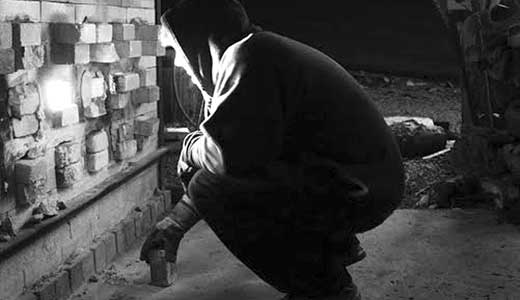 The wheel spins. Sprinkles of water and clay residue spray off as potter Patrick Rademaker molds a shapeless piece of clay into a pot, plate, mug, bowl or any sort of creation he can think up. At age 24, his high level of craftsmanship has already landed him some widespread recognition.

Rademaker got his start in pottery at St. Xavier High School. He went on to study ceramics on scholarship at the Hite Art Institute at the University of Louisville. He’s currently a lab technician at U of L, and has spent a large chunk of the past year traveling around the country to be a workshop assistant to several artists.

“The majority of my time lately has been spent between Tennessee, North Carolina and Indiana, but I have plans to visit Florida, New Mexico, and Rhode Island in the coming months,” Rademaker said.

He also built several kilns all over Kentucky and Indiana, most recently a soda kiln at U of L, and a wood kiln at Indiana University Southeast in New Albany.

Rademaker has entered his work in shows all over the country, including in Wisconsin, Michigan, Florida, Nevada and Missouri. He’s won a first place award at three of the past four Kentucky State Fairs. Along with showing his creations, he has had some luck selling them on Internet sites like Etsy, as well as galleries. He recently put some pieces in the new Gadabout Gallery in Jeffersonville, which is just a few steps from the Big Four Bridge.

When he’s not gallivanting around the country, Rademaker likes to spend 10-14 hours per day in the studio to “get in the zone.” He said the long days are pleasant, especially because his studio mates have become close friends. However, Rademaker quite enjoys the nomadic lifestyle, and hopes to be able to travel with his pottery more and more.

“I think my ultimate goal with pottery is similar to my ultimate goal in life,” Rademaker said. “I absolutely love to travel and meet new people, and I want to do as much of that as humanly possible. But if I’m able to continue working hard and having a great time, I don’t have a complaint in the world.”