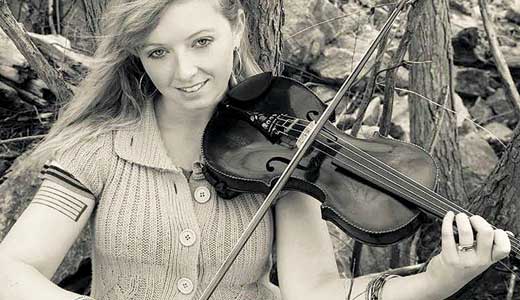 Blanton holds a full-time job at the Kentucky Center for the Arts, so a lot of her free time is filled with practicing, rehearsals and gigs. She makes the three-hour trek some Fridays to have one rehearsal after another, and then performs Saturday night with the Paducah Symphony Orchestra.

“It is demanding to bring everything together in such a short amount of rehearsal time, but we receive the music in advance so it usually works out just fine,” Blanton said.

Her musical abilities span a range of styles besides classical. She’s the fiddler in her backwoods all-female trio The Southern Sirens, where she plays bluegrass to classic rock, and even modern pop.

Blanton grew up with a musical father, but when her fourth grade class learned about string instruments, she was hooked on the violin.

“I went home that day and I told my mom I wanted to play violin,” Blanton said. “They got me one and everything went on from there.”

She started taking private lessons a year later, and played in the orchestra in the New Albany-Floyd County School system, which has a reputation for having excellent performing arts programs. Her junior year of high school, she started working with the University of Louisville’s violin professor, Patrick Rafferty, under whom she eventually would study when she decided to attend U of L to major in music.

Blanton has several performances in the coming weeks, including at the Bardstown Road Qdoba for the Highlands Summer Concert Series Aug. 29, and at Mercury Ballroom on Sept. 19. Blanton is most excited for the Southern Sirens to be an opening act for Bruno Mars at the Congo 14 Festival held at the Muhammad Ali Center.

“Ultimately my big head in the clouds dream is that Southern Sirens would make it big and we could just tour and record,” Blanton said. “At the rate we are going that could definitely happen, but if it doesn’t I am perfectly happy to just perform and teach full time, which I am moving towards doing this fall.”