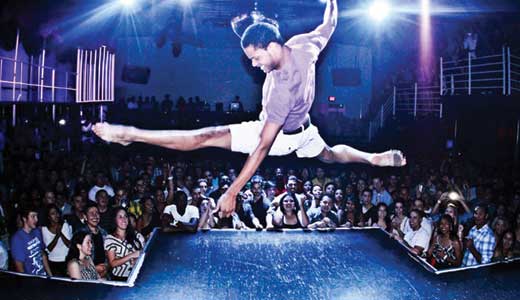 Conrad De Chabert never says he is the best dancer. It’s not because he lacks confidence in his commanding leaps, precise turns or pointed toes. After more than two decades of formal dance training, this 26-year-old Prospect resident is fully aware of the movements his body can make and the emotions he can evoke while performing. He simply doesn’t believe you should ever consider yourself a finished product. After all, if you view yourself as number one, there’s no place to go but down.

“There’s always somebody that can do something you can’t, or do something better than you,” he says. “I’m all about pushing yourself.”

Take for example when the judges of Fox’s “So You Think You Can Dance” told him during the Season 10 auditions back in 2000 that he danced too feminine. He returned a year later with a sleeve of tattoos and an intense new audition routine that wasn’t so much masculine as it was animalistic. He earned a ticket to callbacks, and though he was eliminated in the next round, he’d succeeded at being memorable among viewers.

De Chabert suspects he might have been cut because his personality, while amiable and not at all boring in person, isn’t quite big or bouncy enough for reality television. “I was just there to dance,” he recalls. “I was not focused on the TV stuff.”

Safiyyah Rasool, the artistic director and co-owner of Safiyyah Dance Company in Lyndon, has seen that focus firsthand. De Chabert has taught adult contemporary dance classes out of her studio for the past year. “He makes things fun, but he’s always pushing people to be better,” she says. “I take his class. It’s challenging me to get out of my comfort zone.”

De Chabert’s drive comes from years on the cheer, gymnastics and dance competition circuits, as well as intense professional training, including time under SYTYCD season one champ Nick Lazzarini in the San Francisco Bay Area (where De Chabert lived until his family relocated to Kentucky in 2008). These days, De Chabert mostly choreographs and teaches dance to children and adults. It’s rewarding work, especially when he can offer low- or no-cost training for low-income kids who aren’t lucky enough to have parents like his that could afford private classes.

Even so, his first love will always be the stage.

“Is that bad for me to say as a teacher? I love teaching and choreographing but performing is the best part. In my head I am constantly dancing.”