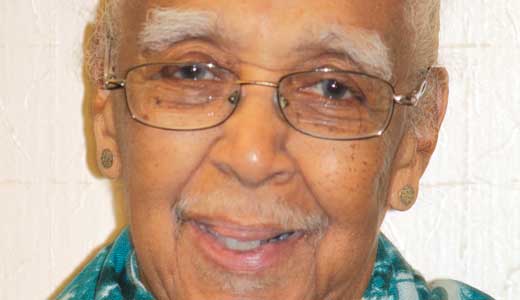 Sometimes I think just getting off the sofa qualifies as an Olympic event. That’s not the case with Elmer Lucille Allen; she’s in her early 80s and has more physical and mental energy than most of us. Just knowing her and experiencing her art is an inspiration.

The Louisville native is best known as a ceramicist and fiber artist. That’s just a fraction of her abilities. One of Allen’s earlier careers was as a chemist at Brown-Forman. This was glass-ceiling-breaking in 1966, as she was the first African-American chemist, as well as one of only four female scientists, employed there. She worked at B-F until her retirement in 1997.

Art became part of her life when she began making ceramics in 1977. “I was having trouble with arthritis in my hands and the doctor recommended working with clay,” says Allen. “I fell in love with it. It was therapy that became a hobby.”

She started taking art classes at U of L in 1981 to get better at ceramics. The 1980s-90s also found her working as the president of the Kentucky Coalition for Afro-American Arts, Inc.

By now you’ve figured out Allen is not one to be idle. “I did all this while working and raising children,” she says. “I’m always multi-tasking!”

In 2000, the breast cancer survivor decided to work on a Masters of Art from U of L (she graduated in 2002). There she was introduced to shibori dying, a technique that uses stitching to resist dye, resulting in a pattern on the cloth. She continues to work in both ceramics and textiles at her studio in the Mellwood Arts & Entertainment Center.

“My primary goal in art is that I create a piece that I enjoy,” explains Allen. “That’s why I don’t take commissions. The ceramics and textiles complement each other. Teapots are something that I have made for years. I like shibori mainly for its stitching. It takes months to make a piece, just to do the stitching.”

Allen is well appreciated in the art and African-American communities and has earned her label of “local treasure.” Her honors include being the first recipient of the Arts Council of Louisville’s Community Arts Lifetime Local Achievement Award in 2004. Volunteering is also a way of life for her; the Wayside Expressions Gallery in the Wayside Christian Mission wouldn’t have a place in the local art scene if it weren’t for her.

“I tell people that you don’t know who you will inspire as you walk around,” she states.

Allen’s art will be included in the group show “2014 Women’s Artist Exhibition: The African Heritage Experience” opening next month at the Kentucky Center for African American Heritage.