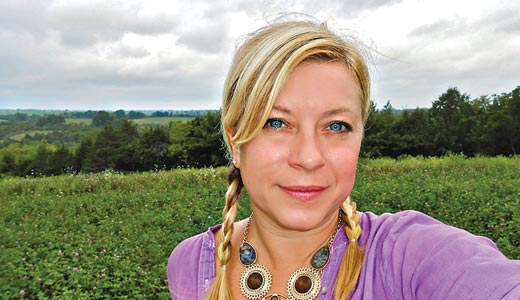 Some may say there is a wide gap between being a well-mannered lady or gentleman and living out among the wildlife. Georgetown-born artist Anessa Arehart is proof that the two can coexist.

“Old fashioned ideas of manners and how to be ladylike are still very much ingrained in me,” Arehart says. “I don’t always follow the rules, but I know them. I’ll always believe manners and etiquette are important.”

Arehart’s upbringing in a small town in Kentucky that she describes as often resembling “Norman Rockwell’s sketchbook” has been a substantial influence on her artwork, which often portrays women posed elegantly, sometimes calling attention to the posture and poise of the subjects, almost always in radiant colors and stylized with heavy lining and a retro aesthetic.

Her artistry started early, with her first oil painting at the wee age of 8. After graduating from the University of Kentucky, she moved to Louisville and helped a fellow UK grad open a gallery, which is when her painting really took off.

But her preferred subject for painting has changed in recent years to one that’s a bit more natural.

This shift is due in large part to a drastic change in scenery. She has moved with her husband to Little Wing Hollow, as described on its Facebook page, “a healing nature sanctuary and artist retreat in Harrodsburg.” The two are sprucing the place up and getting it certified to serve a larger audience than just their friends as a place to get away and dig your feet into the dirt a bit.

“We bought the property two years ago and would visit on the weekends to recharge and clear our minds,” she says of the Hollow. “Eventually we started inviting friends to visit and they felt the same healing and inspirational vibe … My husband, Beau, is in the final stages of opening a canoe and kayak rental business, and we have eventual plans for an outdoor stage/chapel, several primitive camping spots, and a rustic outdoor kitchen.”

They have already been asked about hosting a yoga retreat, a Russian martial arts seminar and a wedding, among other events on the grounds. The goal is to craft the location into a family-friendly place for getaways and events.

But Arehart’s life in art is not on hold, even despite a traumatic brain injury that resulted from a 2013 accident and has left her with “significant cognitive and neurological problems.” This November, Little Wing Hollow is hosting a local Annual Open Studio ARTTOUR in which Arehart and some guest artists will participate.

Arehart has dabbled in the professional world in her early post-college days, running social media for various clients to be able to support her art, but wants to share with others her current life of letting go of the rat race and appreciating what’s around, if only for a day or two.

“I realize not everyone can just run for the hills and join me,” she says, “so the retreat and the paintings are a way of offering folks that wish to experience an alternative reality occasionally — if only for a weekend, or the time it takes to gaze at painting — a hand to gently step off the wheel when necessary.”