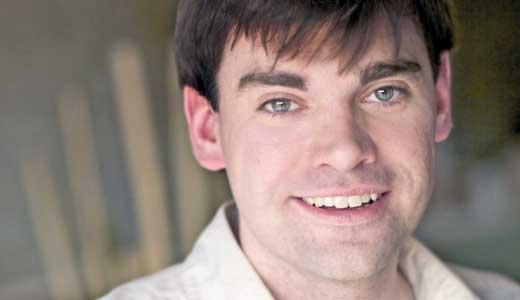 For many in the acting world, performing has been a driving force in their lives since childhood. For Jeremy Sapp, acting was only a hobby until one fateful college day when his University of Louisville professor gave him two choices: write a paper or audition for a play.

With only a few high school roles under his belt, including playing a hot dog vendor in “Annie,” Sapp decided to forgo the paper. With that decision, he gained enough confidence to audition for UofL’s BFA program, into which he was accepted. Since then, the Hazard, Ky. native has stayed in Louisville, performing anywhere he could – Necessary Theater, Stage One and Shakespeare in the Park all on the list.

Recently, you could find him performing in Central Park in multiple Shakespeare productions: “Hamlet,” “Henry V” and “Midsummer Night’s Dream.” Although he has spent the past few months with these beloved works, Sapp says, “Honestly, funny enough, I haven’t done as much Shakespeare.”

And neither of his favorite roles is Shakespearean. Instead, they both seem to relate to one thing: sex. One favorite is Jules in “Boom,” a tale about a scientist who predicts the end of the world and sets up a Craigslist ad to find someone to help him “repopulate the world,” said Sapp.

The second role, Willmore in “The Rover,” follows a true story of a man who dies at age 34 due to an STD. “It was very tragic, but the play was more of a straight-up comedy,” said Sapp.  The character “works his way through three or four women” until ending up with the wealthiest.

It is like a really, really twisted love story,” laughed Sapp.

When Sapp looks to his future in Louisville, he says he has a few things in the works, including a comedia piece to be performed at Savage Rose Theatre.

“With most actors, they have two or three other jobs,” said Sapp. “My goal, essentially, is to have jobs that support that. I’m looking at some arts jobs right now. I want to stay connected to the arts in some way.

“My major goal is to get out of having restaurants be the priority, and have them be more of a supplement, or whatever the non-creative job is,” explained Sapp.

Ultimately, he has one goal: “Be a working actor.”