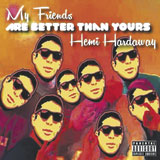 Douchebag rap has been a thing for years now, often by emcees who are capable of putting together solidly built, well-delivered packages, but much like a 3am bar pickup, you feel guilty, dirty, and hate yourself a little bit more after experiencing it. File Hemi Hardaway with Cool Kids, Das Racist, and other similar company. The production serves him well, and his vocals and flow are more than adequate. Hardaway lives the title to his album, name-checking his friends endlessly, which is probably a lot of fun for these people but for the rest of us is yawn-inducing and then stomach-churning by about halfway through the record. It’d maybe be fun if it was a satirical take on the boldface-name-dropping of commercial rap, but this isn’t nearly that clever. If you’re in Hemi’s friend list, you’ll love it. The rest of us can skip.