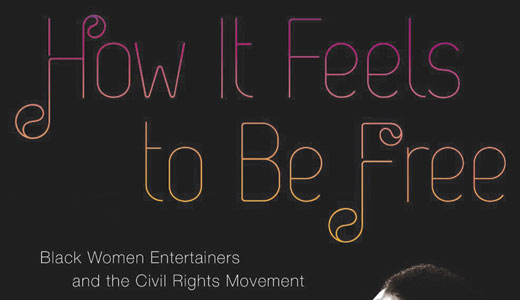 First, a note: the above states that this book is nearly 300 pages, a fair number for an introductory piece about the impact and history Black women in show business made in the 20th century. Once you crack the spine, however, “How It Feels to Be Free” turns into a pamphlet, with 100 of those pages devoted to notes and index. Less than 200 pages in total are devoted to the subject matter, leading to the book’s drive-by nature. It is just the start of the disappointment between its flaps.

“Free” attempts to detail and link the work of Lena Horne, Miriam Makeba, Cicely Tyson, Diahann Carroll, Nina Simone and Abbey Lincoln, on stage, on record and on film. Author Ruth Feldstein doesn’t attempt to be comprehensive, but would have been better served by limiting her scope in order to paint a fuller picture of her subjects, drawing on references and mentions of others to bridge her timeline and tie her thesis together. As is, “Free” reads like an overly-researched but too-tightly-edited-to-be-useful primer that I would love to have read three drafts ago. The finished product is tedious and, given the subject matter — these amazing women and their incredible histories — a disservice to each.

The decision to place Lena Horne as the standard bearer seems borne of the author’s personal fandom more than the text makes the case for. It is a seemingly arbitrary choice in which a number of other personalities could have easily stood, from Dandridge to Baker to Ruby Dee. She and Diahann Carroll stand out as not quite fitting in with their company, at least not on equal footing as a Makeba or Simone. Lincoln and Tyson both experience a missing decade of work due to reasons not explored. The book deals more with individual episodes in the women’s lives, drawing parallels or conclusions that are not always straightforward.
The text itself is jarring, as Feldstein’s research gets in the way of voice, giving mid-sentence “quote breaks” that are unnecessary as the quotes do nothing to build a case or add in any way to the story or reinforces an argument being made that free text couldn’t do by itself. Introductions of new sources or subjects are random. One paragraph mentions Pauline Kael passively, as though we are to instantly recognize the late film critic’s name, whereas less than a dozen sentences before the obscure “white actor Clint Eastwood” is tagged with descriptors for the cheap seats.
The intended audience for “Free” is unclear. It’s not detailed enough to be a source of further research on its own, nor is it interesting enough for a general reader. The collected writings of the subjects themselves should be a starting point for interested readers, even given the autobiography’s natural tendency to lie, gloss and exact revenge. Both Simone’s and Makeba’s books should be required reading. “How It Feels to Be Free” is a $30 200-page Wikipedia entry, and entirely skippable by all audiences.

“How It Feels to Be Free: Black Women Entertainers and the Civil Rights Movement”