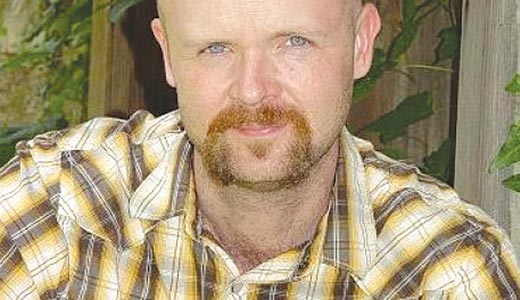 “In writing about rural America, we are all interested in something that wouldn’t come out of Brooklyn writers—a class-conscious sort of narrative.” Charles Dodd White is looking to pinpoint the commonality of his peer group in the region around western North Carolina (think Ron Rash, for starters)—but he also sees it extending toward the Midwest, with a shoutout to southern Indiana’s Frank Bill. The mutual support among this artistic community is strong, says White, but its recent prominence and accolades he’ll credit to “no magic other than we all like to have a beer every once in a while.”

No matter his modesty, White has earned his beer. He’s on tour following release of his third book “A Shelter of Others” (Fiddleblack; 218 pgs., $14). That’ll bring him to the 2720 Frankfort Avenue location of Carmichael’s Bookstore Friday, Aug. 15 for reading/signing at 7 p.m.

This powerful short novel follows the sometimes-parallel, sometimes-intertwining courses of fate that befall those near to Mason Laws following his release from prison. The man himself cannot find an easy fit with either returning to his home life or adhering to the rules of probation. Meanwhile, his wife Lavada and his father Sam negotiate Sam’s rollercoaster-like descent into dementia with some personal grace as well as help and interference from those in their orbit.

The relationships among Lavada, her father-in-law, and her café-owner boss gradually become stronger—not unlike those that Mason finds with townspeople who subsist on the most meager of food, shelter, and occasional drinking money. In phone discussion with LEO, White notes that his own family history led him to look deep into “the idea of the chosen family, and figuring out where your loyalties lie. It’s interesting to me to look at this from a less-visited perspective…that is, people who are on the fringes: by seeking others, they’re able to come to some kind of knowledge of themselves.”

Mason has some grasp on what might help him leave vagrancy behind, but the opportunities flit by or are taken away. White himself is more sure of his own goals, and his character portraits succeed in capturing “what it is to be trapped in circumstance—particularly characters who are traditionally not rendered as a terribly sophisticated kind of personality.” But the author has a sure, maturing hand and knows his stylistic direction: toward exploring the “sense of being marginalized” that’s often at the heart of Southern and Appalachian fiction.

At the beginning of last year, this novel was just beginning to grow out of its initial idea, which now can be gleaned from the short chapters voiced by dementia-hobbled Sam. These are some of the most poetic passages in a book filled with inward-looking observations of great consequence. “I had this idea of this man who was roaming the wilderness—unsure of who he was chasing, but he was chasing someone. That seemed like a mythic thing to work around—but as the story developed, it became attached much more to this idea of what it’d be like to see dementia from the inside out. That’s a difficult thing to render while giving the character dignity—and for me, that was certainly a huge linchpin. The novel is set in and around small cabins and other town “improvements” that often seem on the verge of being reclaimed by the forest and waters. The author points out that “The woods are metaphorical and they’re not. One of the beauties of gothic fiction is that it can be the metaphor and be the thing itself: the shadow and the light at the same time. So it is the symbol, it is the metaphor—but it’s also the reality of dealing with the woods—and for me, his involvement in the landscape is a crucial part of the meaning of the story.”