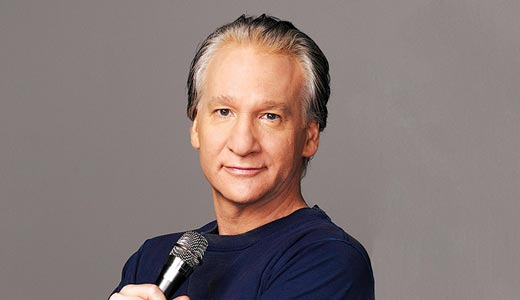 Bill Maher is one of the most controversial comedians of his generation. He is a man who challenges political, religious, and social norms just for the hell of it. If you don’t know who he is by now, then you probably shouldn’t see his show – he was the star of “Politically Incorrect” and the documentary “Religulous”—but currently you can find him hosting HBO’s “Real Time with Bill Maher.” He took some time to sit down and talk to LEO before heading to a Saturday, Aug. 16, performance at Whitney Hall.

LEO: We’re always glad to have a voice of reason down here in the land of the Creation Museum.

Bill Maher: I’ve been there!  We went there when we made “Religulous”…it was very funny.

LEO: I have a morbid curiosity that makes me want to walk through there.

BM: Oh, you should!  Seeing the Dinosaur that Jesus rode is worth the price of admission.

LEO: With Mitch McConnell kind of on the ropes here, there’s a lot of attention on Kentucky right now.

BM: Yeah, isn’t that interesting?  Kentucky’s really got an interesting line-up there with Mitch McConnell and Rand Paul, both right there in the center of American politics. Yeah, that’d be great if we could flip Mitch McConnell, but I don’t think that’s going to happen. He’s a wily old turtle, and when he chooses to stick his neck out of his shell he usually wins.

LEO: This is definitely the closest race he’s had in many years.

BM: Right! It could happen, I know Bill Clinton (was) coming to the state to campaign for Grimes, right?  People must like him in Kentucky. He’s a good ol’ boy. And Obamacare is doing well there, too. It’s very popular, and makes it kinda difficult for Rand Paul and Mitch McConnell to keep talking about: we’ve got to repeal this thing that everyone here loves and is working so great!

LEO: It does feel like Democrats are letting Republicans hold them hostage with these civil rights issues like gay marriage and birth control, neither of which should even be issues anymore, right?

BM: I couldn’t agree more!  Look at health care…own it! You gave Americans health care, not herpes. Be proud of it, run on it. That is the Democrats’ big flaw: they don’t own it. They don’t get behind their own achievements.

LEO: This congress has been very ineffective. A lot of that is due to the fact that they vote on behalf of their donors and not their constituency.

BM: That’s correct…I think that is one of the big problems. You put your finger right on it…yes.

LEO:  Is there anything we can do to fix that?

BM: That’s a great question. Ross Perot was talking about this back in ‘92 when he ran for president and got 19 percent of the vote. His big issue was we gotta get rid of the lobbyists; we’ve gotta clean up K Street because this country is bought and sold by special interest groups. Ralph Nader said that when he ran, “corporations have a stranglehold on this country.”

I ask myself this a lot, why is it that the T.E.A. Party, the people that are supposed to be grassroots types, how come their agenda is the same as the Koch Brothers? Why are they voting for the same things billionaires want? How come, in their mind, the problem with the economy is not banks that are too big to fail, or income inequality…it’s poor people hoarding money? Which, of course, is not the problem…but it’s an amazing trick they pull off.

LEO: In the past, you have described yourself as libertarian. Would you still describe yourself that way?

BM: Well, it depends on how you define it. I still subscribe to what I thought back then, which is that legally you should be allowed to do anything that doesn’t hurt another person. But that never meant that we shouldn’t have meat inspectors. That’s a radical version of libertarianism that has taken hold of some people on the right, people that read Ayn Rand in college, as we all do, and then kept believing it the rest of their life, as mature people don’t. Do I believe that drugs should be legal? Yes I do. I believe that’s a health issue, and should not be a criminal justice issue. But of course meat inspectors, traffic lights, these aren’t infringements on my freedom, these are necessary elements that a responsible government does to keep people safe.