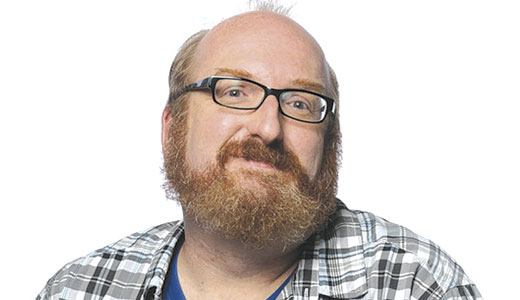 Brian Posehn is about as famous as someone can be, without being famous. His face is instantly recognizable, while his name probably still alludes mainstream America. You’ll know him from roles on network and cable shows like “Just Shoot Me,” “Newsradio,” “The Sarah Silverman Program,” and “Mr. Show with Bob & David.” He was also a lynchpin performer on the road and resulting series of documentaries produced by his friend Patton Oswalt called “Comedians of Comedy Tour.” Posehn will be performing this weekend at The Laughing Derby.

LEO:  Who are your comedic influences?

Brian Posehn: You wouldn’t maybe see the influence in my performance, but, I grew up in the 70s, so Steve Martin was my hero. Then things that really imprinted on me were shows like “SCTV” and “The Muppet Show,” and movies like “Caddyshack” and “Bad News Bears,” and that kind of stuff. I was just obsessed with all comedy as a kid. I never really thought I could do it myself, but I loved it. Also, I would repeat jokes a lot, and that’s something that friends from way back then or my mom will still bring up. Even though I was 10 years old and didn’t think I could be a comedian, I was a funny kid and always quoted stuff.

LEO:  Do you think that stand-up comedy comes from a dark place?

BP:  No. I think a lot of good stand-up comedy does, but I don’t think it has to. There’s a million comedians that it’s not about that at all. Ya’ know, a guy like Brian Reegan, or a guy like Jim Gaffigan, they aren’t really drawing from dark places – at least as far as I can tell, but still they’re extremely funny. And then the stuff that I tend to like more does draw from that. People that are more real, a guy like Louis C.K., that’s one of my favorite comedians, definitely does draw from everything in his life…light places and dark places.

LEO:  As a fan of horror movies and heavy metal, was it a dream come true to combine those two and work with Rob Zombie in “Devil’s Rejects”?

LEO:  Which of your roles is your favorite?

BP: “Devil’s Rejects” was my favorite film role, definitely. And then Brian [on “The Sarah Silverman Program”].  And Kevin on “Just Shoot Me.” “Just Shoot Me” was a mainstream sitcom, but I really got to do a lot of fun things on that. Those kinds of shows can be kind of restricting as far as ideas, but they were very cool. The whole time I was on there I had nothing but a great experience. I loved the regular cast, I loved the writers, and I loved the things I was able to do on that show, and the fact that it was such a fun character … he was just anything goes. One week I would be attacked by a vulture on that show, and another week I was in a food eating contest, and another week I got to make out with Mary Lynn Prescott, my old friend. So it was a lot of fun, just a really goofy character for whom I probably get recognized the most, at least from mainstream audiences.

BP: As somebody that checks them out, they’re kinda ridiculous. Before Twitter, I didn’t know what kind of boring things my friends were doing. Now they tweet about what they’re gonna have for dinner, or when they’re gonna work out, or take a run through the canyon – it’s super boring. For me as a comedian, it’s a great thing. I love Twitter and Facebook to keep in touch with fans, and letting people know when you’re coming to their cities who might not read the paper or catch it any other way. They can hear from me personally that I’m coming, and it’s pretty cool. It’s a great tool.