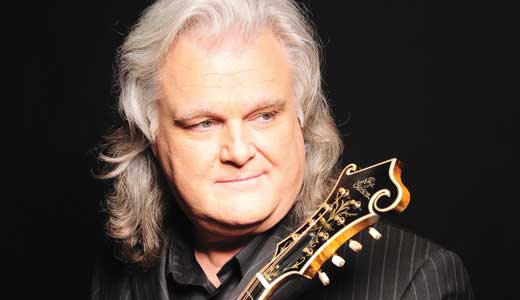 Born 60 years ago this month in Cordell, Ky., Ricky Skaggs has been pickin’ since kindergarten, picking up 14 Grammys, selling millions of records and collaborating with everyone from Jack White to Sharon White (his wife, and a vocalist in the family band The Whites). Now based in Nashville, Skaggs took a break from working on his first album of duets with his wife to talk with LEO.

The Skaggs have been married since 1981. Their album, due Sept. 30, is called Hearts Like Ours. It happened almost accidentally when the pair, often asked to speak at marriage conferences, decided to record a few songs together to have something to sell at those lectures. “We’ve been married for 33 years, and everybody thinks that we’ve written the book on good marriages,” Skaggs says. “We do have a happy marriage, it’s been great … We did a little mini CD, five songs; then we decided we wanted to finish it, make it a real CD that we could put out in the marketplace. Maybe have a single or two that we could try to promote to country radio, as well.”

So the pair recorded eight more songs, including a Flatt & Scruggs song White brought in, “No Doubt About It.” Skaggs recites a few lines for me: I like the way you smile / I like your dimpled chin / I like the way you laugh / I like the way you grin. “It’s just a little love song, back and forth with each other. But I’ve never heard it done as a man-and-woman duet,” he says. “It’s the sort of thing George (Jones) and Melba Montgomery should have done.”

Next month, Skaggs’ autobiography, “Kentucky Traveler: My Life in Music,” will be issued in paperback. He’s thinking about recording an audiobook version, too.

First, though, Skaggs and band return to Louisville with some old friends. “We’re really excited about that,” says the ever-eager mandolin master. He first met opener Rhonda Vincent, who’s now 52, when she was a child playing in her family’s band, The Sally Mountain Show. Her brother Darrin, who would go on to play in Skaggs’ band for seven years as an adult before leaving to form the acclaimed bluegrass act Dailey & Vincent, “was standing on a chair playing the bass fiddle when I first met him,” Skaggs says.

Skaggs met Bowling Green native Sam Bush in the 1970s, when Skaggs played the bluegrass circuit as a member of Ralph Stanley’s Clinch Mountain Boys. “I remember seeing Sam with the Bluegrass Alliance, out of Louisville. It was before the Newgrass (aka Progressive bluegrass) revival got started. That was a long time ago, but we’ve just followed each other around for years in different bands.”

Skaggs later played with J.D. Crowe and Emmylou Harris before becoming a hot solo act in commercial country music in the ’80s. As he aged out of that field, he reevaluated his life and returned to bluegrass in 1996. “I’ve been so happy coming back and playing real music again,” he says. “I think, these days, bluegrass really is the most pure form of country there is out there.”

He hopes to remain active and creative in music for another 20 or 30 years. But it’s not his top priority, he says. “Really, what keeps me young, keeps me excited, is my spiritual life. Because I know music is such a part of that. It’s hard to have one without the other … I think that’s what makes me a better musician, a better singer, to be able to hear the sounds I need to hear and sing, and play and travel, and have the successful marriage that Sharon and I have had for 33 years.”

Does his faith help him focus? Does it remind him to keep his ego in check? “Absolutely,” Skaggs says. “I wear a bracelet that says, ‘I am second.’ I look at that all the time … My faith keeps me where I need to be. If I really had an ego, or if my focus was on my career, man, I would’ve been gone a long time ago.”