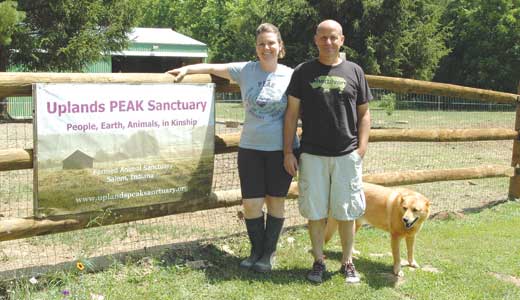 Mark and Michelle Pruitt didn’t expect their new neighbors to attack with burning pitchforks, but they did question whether a local market existed for the philosophy they were promoting. The couple had just moved into Salem, Ind., to open Uplands PEAK Sanctuary, their 20-acre refuge for rescued farm animals that doubles as a campsite and venue for mindful-living events like vegan cooking and day-retreats that involve art and yoga. PEAK is short for People, Earth and Animals in Kinship.

It is easy — well, easier, anyway — to advocate for veganism and animal welfare in an urban setting, like Louisville, where progressives and liberals tend to assemble. It’s a different matter altogether to flout such beliefs in the rural countryside, where nearly everyone has grown up around farms or farm animals, and none of the restaurants offer menu items that are vegan by default. The Pruitts wondered if they’d be able to carve out a niche in the heartlands.

An answer came soon enough. When the Pruitts approached a nearby restaurant called Garden Table Market to implore them to offer one vegan-friendly option on their menu so that any vegan visitors to their property would have somewhere nearby to eat, the restaurant happily complied. Then, a week later, the restaurant owners reported the vegan option had been the second most ordered item.

The Pruitts consider that a small victory. When you’re up against the billion-dollar animal agriculture industry that does its best to shield the public from the bloody reality of their operations, you learn to savor small victories like introducing even one vegan option into somebody’s diet. Then, there’s the possibility that one delicious animal-free meal might spark curiosity about other animal-free meals and maybe lead to a regular change in somebody’s diet.

Every year, millions of cows, chickens and other livestock are farmed or killed for food in Indiana alone — likewise in Kentucky. In Louisville’s aptly named Butchertown neighborhood alone, 10,000 pigs are killed daily at the JBS Swift slaughterhouse.

Less than a mile away from PEAK, just off the road are two giant barns containing thousands upon thousands of chickens that will, sooner rather than later, become a Tyson Food product. As I drive by one weekday after a visit to PEAK, I see a semi-truck parked out front. Shallow cages tall enough for a chicken to stand but not lift its head upright are stacked 10 high all across the bed of the truck. One rogue chicken has somehow escaped a cage and is futzing about on the top of her caged brethren.

“We will save very few animals,” Mark had conceded to me earlier, probably while imagining a sight like this. He and his wife hear the Tyson truck rumble by their property regularly. “The real mission is to learn. By changing a person’s mind, you could save 100 animals per year in their lifetime.”

The Pruitts left Louisville, their hometown, for Salem in September after months of research and planning, including extensive seven-week immersion training for Michelle at Woodstock Farm Animal Sanctuary located a couple of hours north of New York City. They left behind their day jobs — Mark has a background in social work and was most recently the director of behavioral health at a major hospital, while Michelle has worked mostly in recruiting and coaching.

They battled through the rough winter, learning how to erect fences and build sheds via instructional YouTube videos. They achieved official nonprofit status and have already received a respectable amount of support, including one donor who has agreed to match up to $15,000 in donations received through Aug. 26. Meanwhile, groups and organizations from Louisville, Indianapolis and Indiana University in Bloomington committed to volunteer daytrips for service projects requiring more manpower than the two of them can provide. They also brought on an intern, who lives on the property and assists them.

Eventually, PEAK plans to open a modest bed and breakfast for people who need a little more modern comfort than a tent in their 15 acres of woods can provide. They will also continue holding one-off events like PEAKsgiving, a vegan Thanksgiving meal that sold out with 45 people.

Mostly, though, they will talk to anyone who stops by.

Michelle says they’ve gotten several visitors who have never heard of a farm animal sanctuary. These folks sometimes have a difficult time with the concept that the animals won’t ever be used and will instead simply live out their entire lives lounging in the shade or rolling around in a mud pit they dug out themselves.

“The place we all meet is we all love animals,” says Michelle, adding that when veganism and animal welfare comes up, it’s usually the result of a question the visitor has.

She continues, “We’re about sharing info, not shaming people.”

All of the animals at PEAK have human names. There’s William, a regal-looking goat that once lived tethered in a Highlands backyard before his owners recognized the environment as ill-suited, and two newer goats, Twiggy and Luke, confiscated by Salem authorities from an owner who’d locked them up and allegedly neglected them to the point where they hadn’t seen sunlight in more than a year.

Then there’s Andy and Annie, a pair of farm pigs that escaped their dinner-plate destiny by breaking out of a backyard in Minneapolis before being picked up by local animal control with twine still wrapped around their legs. There’s a trio of pigs named Isaac, Erica and Brandi that came via Woodstock and a neglect case in New York. Finally, their newest resident is Lucy, a pig that fell off a transport truck in Illinois.

The point of the names is to remind people that these animals aren’t so different from the humans who consume them. They feel pain, and they have an innate desire to avoid that feeling. When I arrive at the farm, the pigs are sleeping in their barn. Michelle explains they’re taking their afternoon nap and will likely be up in an hour. An hour later, like clockwork, there they are, rolling in the mud and scratching their backs against the fence posts.

“When you pet them on their back, they’ll flop over so you can rub their belly,” says Michelle. “They seek pleasure and avoid pain.”

The Pruitts plan to shift the pig area partially into the woods so the animals can root, dig and make their own shelters the way their undomesticated cousins do. Then, the goats will have more space for grazing and jumping on things. So far, there are no plans to add additional species.

“Every time we get a new animal, we recognize the responsibility — that we are in charge of another being, another life,” says Michelle. In order to do that properly and understand the needs of the species, they’re keeping expectations reasonable until they are certain they can accommodate more.

Until they get to that point, the Pruitts feel their current clan of animals will act as proper ambassadors, and they’ll keep celebrating little victories, like the question one youngster asked after spending some quality time with their pigs.

“This little girl was basically spooning this pig for 20 minutes,” recalls Mark. “Afterward, she started asking, ‘What kind of food comes from pigs?’”

EDITOR’S NOTE: An earlier version of this article incorrectly quoted Mark Pruitt as saying, “By changing a person’s mind, you could save 100 animals in their lifetime.” The quote should have read “… you could save 100 animals per year in their lifetime.” Also, the prior living condition of the goats Luke and Twiggy was incorrectly described. The goats were not chained; they were with four other goats in a stall that was nailed shut. The LEO regrets these errors.