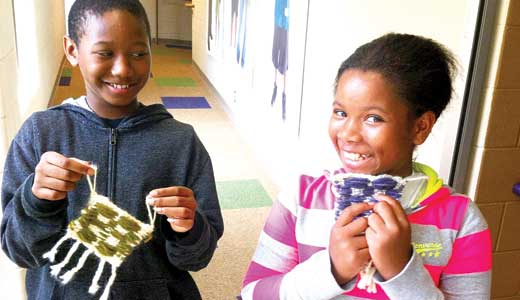 At first, it doesn’t look like much — a bunch of white yarn stretched out vertically across a bunch of notches cut in a piece of cardboard, a bit of colored yarn weaving in and out horizontally. Eventually, though, as tiny hands continue weaving those strands of blue or purple (or both), something begins to emerge: a simple but homey pattern.

Most kids these days don’t get hands-on experience in textile or folk art like this. By and large, this stuff goes under- or untaught in visual arts curriculum. Partially because it requires materials and space that are impractical or hard to come by for under-funded programs, but also because the art form is, as a whole, silently slipping into a historical pastime as the contemporary world embraces outsourcing the production of quilts, blankets and other textiles.

Thanks to a collaborative project held this summer between Cabbage Patch Settlement House and The Little Loomhouse, more than 20 at-risk youth were able to sample several distinct styles of fiber arts through new curricula that organizers hope will be picked up by more traditional arts education providers in the future. Cabbage Patch Settlement House, which was founded in 1910 (a good 68 years before those bug-eyed dolls of the same name), provides educational, recreational and other social services to children and their families. They serve more than a thousand families a year overall and about 100 kids directly every day in their expansive campus on Sixth Street in Old Louisville. Most live within two miles of their center. Meanwhile, Little Loomhouse is a volunteer-operated arts nonprofit that provides textile and folk art classes and demonstrations, often at its registered historical cabins in the South End.

Key in the collaboration was Elizabeth Smith, the recreation and youth development specialist at Cabbage Patch who teaches all sorts of art but has a passion for fiber arts and was completing a new artist-in-residency program at Little Loomhouse. She and Stephanie Brown, the education coordinator at Little Loomhouse, were working on an activity pack that other art educators — ones with less firsthand experience in fiber arts — could purchase as a teaching aide when it occurred to them they could test run what they’d created with kids at Cabbage Patch. Over the summer, they held several sessions as part of Cabbage Patch’s ongoing regular arts activities. They dyed and stitched and weaved, creating art in the Navajo, Ojibwe and Kentucky quilt and coverlet traditions. Participants ranged from 8 to 17 years old.

“For me, it’s fun to see everyone put their spin on something. I can look at a piece and know exactly who made it,” says Smith. More practical, she adds later, are the life skills like sewing and dyeing. “It’s nice to see whose skills keep going on.”

The youngsters’ work will go on display at the Local Speed as “Working Hands: A Modern Generation Explores the Ancient Craft of Textiles,” the latest offering from “Wall Together,” the satellite museum campus’ ongoing collaborative project aimed at engaging the community through art. The exhibit, whose opening is scheduled for Saturday afternoon, will run through Oct. 25.

Working with textiles is not difficult, but it’s not easy. That’s part of the appeal of fiber arts for Smith, both in creating pieces herself and in exposing children to the craft. “It’s not a simple thing,” explains Smith. “It’s two hours, sit down and focus.”

For students who struggle with watercolors or sculpture, fiber arts offer an artistic endeavor that can be heavily process focused. Fiber arts offer an approachable structure, and it doesn’t feel like something that requires natural talent. Just put in the admittedly sometimes tedious work, and you’ll complete the project. It is also inherently functional to make something like a quilt, which appeals to those who appreciate practical value over the aesthetically pleasing.

Smith continues, “A lot of kids, when they think of art, they might think of one thing. They think of drawing, painting. Part of the goal is for them to see how big art really is.”

Javoughn Brown Jr. — everyone calls him Juju, yes, after the candy Jujubes — might know this better than anybody. Through their various programs and offerings at Cabbage Patch, the 17-year-old has embraced writing poetry, learning to play guitar, juggling, playing soccer and lots and lots of art. He even attended two “circus camps” taught by a clown who also went by the name Juju. (Luckily, Juju the non-clown has a sense of humor and wasn’t bothered.)

“I thought I’d done everything here,” he says, “but even after 13 years, people still surprise you. I didn’t even know this stuff existed. It’s amazing.”

The soon-to-be high school senior, who lives in the West End, is what you might call a lifer at Cabbage Patch. He has been coming to the community center since he was 4 years old, and though he will age out of admittance once he graduates, he is currently in training now to become a counselor there and hopes to work there “forever.” That is a path that isn’t unheard of. Several key staff members at the organization started as attendees. The appreciation for the organization might run just a bit deeper in Juju than it does in most, though. His parents met at Cabbage Patch — what he describes as “a thousand years ago” — and his older sisters (and soon him) benefited from college scholarships provided through the organization’s partnerships.

“A lot of kids don’t have a place like this. They need something to do. If there were more Cabbage Patches around the city, it would be a better place,” he says, adding that he’d love to open his own someday. “I wish every kid in the city could experience this.”