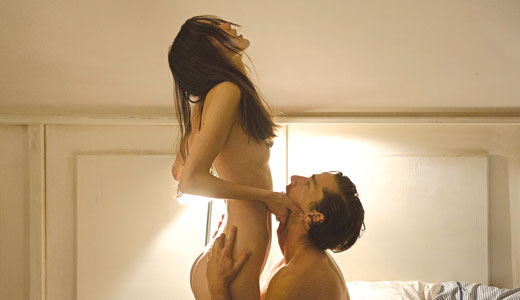 The complete two-part conclusion to Lars von Trier’s “depression trilogy,” following “Antichrist” and “Melancholia.” Charlotte Gainsbourg plays Joe, a nymphomaniac found beaten and unconscious by Stellan Skarsgård. She regales him with lurid tales of her misspent youth, having dangerous and varied sex with anyone and anything that caught her fancy. He prattles about fly fishing and the Fibonacci series of numbers. Sperm donors include Shia LaBeouf, Jamie Bell, Willem Dafoe and Udo Kier, with Christian Slater as Father. Paint-shaker orgasms provided by Stacy Martin and Ananya Berg as young Joes, along with Mia Goth and nubile Sophie Kennedy Clark.

Before his death in 2012, actor/director/producer/pornster Zalman King created some of the most celebrated adult material of his generation, including the groundbreaking “Red Shoe Diaries” with David Duchovny. This flick was his last non-documentary directorial effort. Taking cues from “50 Shades of Grey,” a quiet young woman (Malena Morgan) becomes ensnared in the charms of a wealthy man who exposes her to a world of sexual abandon that she isn’t prepared for. Far more substance than you’d expect, asking the viewer, “What are you willing to do for love?”

Originally titled “Die Säge des Todes,” this early Spanish/German slasher flick comes to us courtesy of the inimitable Jesús Franco. A disfigured guy is sent to an asylum after a rape-murder rampage, then released after only five years to the care of his incestuous sister and wheelchair-bound mother at their boarding school for young women! Not one for subtlety, Franco delivers his trademark bloody nude carnage with gusto, including a remarkably good severed-head-on-a-pillow effect that today’s filmmakers are still scratching their heads over.

Johnny Knoxville’s re-edit of his “reality” shock/carnage ode to aging, with an additional 40 unrated minutes of pranks. Special guests include Spike Jonze (director of “Her,” who also co-wrote the screenplay) as “Gloria,” and Catherine Keener as Knoxville’s wife. If you liked the original, then you’ll love this.

The great director Alejandro Jodorowsky, who brought us “El Topo” and, most recently, episodes from TV’s “Metal Hurlant Chronicles,” once vowed to create the definitive telling of Frank Herbert’s “Dune.” He failed, but the story of his failure may be more entertaining than “Dune” itself (or at least the David Lynch/Kyle MacLachlan movie version). This doc looks at Jodorowsky’s efforts and the way the movie industry treats visionary talent. With insights by H.R. Giger, Michel Seydoux and many others.

While you might expect a movie about two young Idaho buds who start a Canadian pot-importing business to be a wild and wacky teen comedy, this is far more real and far more interesting. Yes, it’s full of sex, nudity and weird experiences, but it’s also full of real crime and real consequences, without ever being preachy or overdramatic. Stars Jonathan Daniel Brown (“Project X”) and Kenny Wormald (“Footloose” remake), with Ron Perlman, Lochlyn Munro, Amanda “Sanctuary” Tapping and lovely Merritt “Ravenswood” Patterson, who gets nicely nekkid.

Back in 2000, we dubbed this “terribly lame” — man, what were we smokin’? Now one of our favorite bad movies of all time, it finally gets the Blu-ray love it deserves as Bill Pullman, Bridget Fonda, Oliver Platt, Brendan Gleeson, Mariska Hargitay, Meredith Salenger and Betty Freakin’ White fend off an impossible monster crocodile in New York’s Lake Placid. With effects by Stan Winston, a croc-helicopter wrestling match and some wonderfully obscene lines from sweet old Betty. What more could you want in a film?

We have mixed emotions about this doc on New Zealand native Laura Dekker, an exceptional 14-year-old attempting to be the youngest person ever to sail around the world alone. Literally born for adventure, she came into this world aboard her parents’ sailboat while on their own seven-year ’round-the-world trek. But her voyage would encourage other, less prepared teens to try their own deadly stunts. A very straightforward telling (largely by cell phone) with no embellishment, but nonetheless fascinating and disturbing.

Some of our favorite supernatural cinema comes out of Hong Kong, like this tale of a decrepit and infectious public housing pile that’s chock full of ’80s Chinese horror tropes. These come courtesy of director Juno Mak and legendary J-horror producer Takashi Shimizu, who populate the film with faces from the now-legendary “Mr. Vampire” franchise. Not out for cheap shocks, this is a dark, dreamlike tiptoe through ghosts, vampires, zombies and shivering Chinese folklore that builds to a balls-to-the-wall battle with the undead. Sweet.

We wallow in some pretty sick shit to entertain our readers, but this may be the single most nightmare-inducing willies-fest we’ve ever seen. Social worker Anjanette Comer visits an average American family: a mom (Ruth “Knots Landing” Roman), sisters (including leggy Susanne Zenor) and a nameless, helpless, crib-bound, diaper-wearing, bottle-sucking 21-year-old man with the mind of a child. What happens next is a cult-movie nightmare, and, frankly, there’s not enough money on the planet to make us watch it again. Now on Blu-ray. Oh, and it’s rated PG! Enjoy.

The original was a groundbreaking Indonesian crime thriller about a SWAT team raiding a high-rise tenement building, the fortress of a deadly drug lord, filled with wretched, innocent cannon-fodder. This sequel finds martial-arts master Iko Uwais, the hero of the raid, now besieged on all sides: from the drug lord’s bosses and competition, from politcos and cops on the take, and from one particularly brutal faction that threatens his family. His only recourse? Go undercover and kick his way back to the light. Savage, bloody and poetic.

More from this raucous collection of stag films, originally in 8mm, made between 1960 and 1980, representing the world’s first true home-video products. These explicit “peepshows” were popular in adult bookstores, abandoned urban theaters, living rooms and especially bedrooms all across the country, lubricating the spread of sexual freedom and stimulating that sense of experimentation that spawned today’s society. Watch them anyway. Fifteen classic shorts featuring people without their shorts, including Annie Sprinkle and Jamie Gillis.

The ’80s were just discovering the dead-teenage flick when this rarely seen indie gem arrived. That’s why very few remember it, despite a cast that includes K.C. Martel (“E.T.”), Joe Penny (“Jake and the Fat Man”), Michael Dudikoff (“American Ninja”), Susan Strasberg, Jose Ferrer and MTV babe Julie Brown — who does a nude dance number! A trio of bad-widdle-kiddies go berserk on their collective 10th birthday, butchering every adult in sight. One of our guiltiest of pleasures, now on Blu-ray with much-appreciated bonus goodies.

A once-lost Canuck classic from the heyday of the mad slasher movie, it returns now in all its classy, flesh-peddling gory-glory for the first time since the earliest days of VHS. John Vernon and Samantha Eggar (do we really need go on?) star as a movie director and his would-be star. He tricks her into an insane asylum so that she can “learn what its like” to play the part — while he goes on interviewing a half-dozen nubile young wannabe-starlets! Hmmm, wonder where they all keep disappearing to? We love crap like this.

A doc on women’s pro cycling, focusing on the perceived unfair treatment of its athletes by the media, industry, and male cyclists. Works best when it lets the athletes speak for themselves about their supposed “innate inferiority,” “lack of strength and stamina” and (snigger) potential damage to their lady-parts. Hmm, don’t remember that topic ever turning up in a male-sport interview before … Surprisingly funny, especially when the women ride their male counterparts into the pavement. A bit talky and self-serving at times, but undeniably entertaining.

Retitled “Mini Monsters” when broadcast on the Discovery Channel, this is the original uncut UK version, a breathtaking sojourn into the life of very small creatures. Stephen Fry tiptoes through a world where thumb-sized mice take on 8-foot snakes, where chipmunks dine at toadstool tables, and lizards smaller than a dime take flight on desert windstorms. Lots of pint-size nature fun.

Christian-themed bio-flick on the life of the late Rich Mullins. A musician, most famous for “Awesome God,” he survived a rough childhood to become one of gospel-country’s biggest stars, eventually finding peace on a Navajo reservation before dying in a Jeep accident in 1997.

One of our favorite old TV shows, and one of the highest-rated dramas in TV history, all but unseen in decades, now available on DVD for all to enjoy. Acting vet Barbara Stanwyck is head of the Barkley clan, struggling to hold their massive 1870s business interests together while family dynamics, nature, and evil baddies fight to tear them apart. With her illegitimate half-breed son (Lee Majors), and his brothers (Richard Long and Peter Breck), she rides the fury like a force of nature, but it was her daughter, played by jaw-dropping beauty Linda Evans, who kept us tuned in each week. Yow! A TV masterpiece of writing, cast, direction and locales unequaled to this day; 26 big episodes, including the terrific two-parter, “Explosion!,” in which the boys try to stop a forest fire … with nitroglycerin!