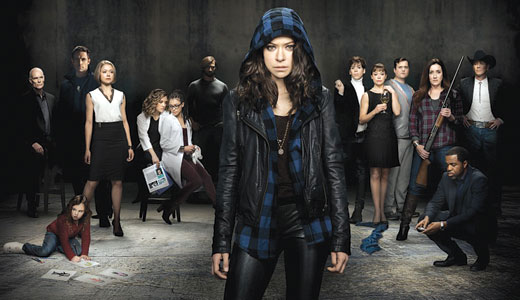 Jason Isaacs (Lucius Malfoy from “Harry Potter”) plays a reluctant, dark PI in this masterful BBC series. A hardened former cop/soldier, his hidden tender side keeps him knee-deep in hard-luck cases with nary a dime to show for them. And these cases tend to be more real-world stuff — missing persons, wayward spouses, etc. — than TV’s current crop of investigators, but each resonates with the viewer in surprising ways thanks to a brilliant cast that includes Millie Innes as his 12-year-old daughter, Zawe Ashton as an unpaid bookkeeper, and the only cop who will still talk to him, Amanda Abbington from “Sherlock.” Why can’t ’merican TV be this good?

If you’ll pardon our French, this series is the best mind-fuck on TV. The amazing Tatiana Maslany (“Parks and Recreation”) plays a streetwise punk — along with a half-dozen or more other characters, sometimes in the same scene! — in this thick stew of genetic manipulation, clones, secret government nastiness, crazy techno-religious cults, cops, soccer moms, brainless husbands, sexuality in all its glorious forms, drugs, murder, corporate slavery, and mysterious killer step-moms from the BBC. And at the center of it all is her adorable little daughter, a girl who can’t possibly exist. You’ll want to go ahead and get Season 1 while you’re at it. Addictive.

This cheap collection is notable for being the first-ever DVD release of a VHS favorite, 1982’s “Final Option,” a British thriller about a master soldier infiltrating a terrorist group. Way ahead of its time, it made the career of Lewis Collins, with help from from Judy Davis, Richard Widmark, Edward Woodward and Ingrid Pitt. Also includes “I Escaped From Devil’s Island” (Jim Brown; 1973), “Treasure of the Four Crowns” (1983) and 1959’s James Cagney thriller “Shake Hands with the Devil.”

If you’re a fan of “The Boondocks” or “Afro Samurai” (and who isn’t?), then you’ll dig this groovy Cartoon Network series from the same director. Based on 2009’s live-action “Black Dynamite” starring Michael Jai White, who now voices and writes these seriously demented episodic odes to Black Power, Kung Fu grip and sweet, sweet lovin’ with Tommy Davidson as his straight-up sidekick, Sweet Corn. Listen for Jimmy Walker as Roscoe and Byron Minns as Bullhorn. One baaad-ass hoot.

DAVID SUCHET: IN THE FOOTSTEPS OF ST. PAUL

David Suchet, best known for playing Hercule Poirot in Britain’s long-running Agatha Christie mysteries, narrates a tour of Christendom starting at the site of the crucifixion, eventually taking us through Greece, Philippi, Thessalonica, Athens and Corinth. The goal? To illustrate how Judaism, Christianity and Islam got along back in the days of St. Paul, and his effect on world history. Lots of lessons for confused modern-day Westerners.

A real guilty pleasure from the “nature run amok” genre. TV vet Sam Groom co-stars behind a pack of toupée-enhanced dachsounds, filling in for the titular giant rats of this notorious ’80s howler. The product of “steroid-contaminated corn” — which could well be a euphemism for this movie — they chow down on the good people of Toronto, including Scatman Crothers, Sara Botsford (“Lizzie Borden Took an Axe”) and our favorite blonde teen-scream queen of the day, Lisa Langlois (“Class of 1984,” “The L Word”). Now on Blu-ray.

“Mecha,” the anime genre that put men into giant fighting robots, gets a much needed rejuvenation in this little known series. Frankly, the “pilots” of Team Rabbits are losers: though genetically engineered for the job of saving Earth from a ruthless, technologically advanced invasion force, they are clumsy, inarticulate and can’t seem to work together. They aren’t heroes: They’re just doing the best they can. But beyond the very real personal interactions, what sets this series apart is the artwork and direction, particularly during battle sequences, which are fluid, graceful, exciting and ingenious — absolutely the best we’ve ever seen. Now on Blu-ray; we can’t wait for the rest of the series to be released.

This flick sets out to raise the bar for nightmarishness, and clears it in street shoes. Of course, lead actress Caitlyn Folley isn’t wearing shoes or much of anything else most of the time, but we’re not complaining. Aka “sxtape,” it tells of a free-spirited artist (Folley) who lets a guy tie her to a gurney. Naked. In an abandoned hospital. Where bad things have happened. And he just leaves her there. Where anyone or anything can just come along and … At this point it goes from titty-flick/soft-porn to all-out horror. Seriously sick.

Clearly a work of low-budget Canuck affection, this shlocky shocker mines “child becomes prize of backwoods loonies” tropes to transition from family drama to horror. Little Peter “Reign” DaCunha is terrific as the kid whose four bedside dolls go from creepy to flat-out overstuffed nightmares, but what made it work for us were the believable newlyweds played by Robin “Sanctuary” Dunne and Katharine “Ginger Snaps” Isabelle. Nicely R-rated, and deservedly so.

A collection of five dark made-for-TV movies/minseries from Scandinavian crime novelist Arne Dahl (pseudonym for Jan Arnald, arguably the world’s greatest living thriller writer). Focusing on an elite Stockholm detective squad known as the “A Unit,” they star Malin Arvidsson and Irene Lindh, et.al., as very flawed, if seasoned, professionals thrown together after that notoriously non-violent country is rocked by a series of brazen and savage assassinations. Frankly, to call these cops “flawed” is being kind, but their weaknesses — and excesses — mesh together perfectly for the job at hand. The drama and mystery are first-rate, the visuals some of the most brutal, repulsive and realistic ever shown on the small screen. Highly recommended.

A unique and thought-provoking drama from Japan. Masaharu Fukuyama (“Galileo”) stars as a successful, if very stressed, businessman who discovers that his 7-year-old son is actually not his son at all: two boys were switched at birth in the hospital. But after seven years, which is “really” his son, the boy he has raised or his biological child? Then something far more disturbing occurs to him: Has he ever been a “real” father to either? A kaleidoscopic foray into the mind of men like nothing we’ve ever seen.

Our readers tell us this subtitled French crime series, filmed in a palette of stark grays, is one of their faves. Ours too! Season 4 starts off with a bang when college students set off a homemade bomb, killing one of their own. But as regular viewers know, there’s more here than meets the eye. Watch as things proceed with clockwork precision to include arms traffickers, rape, suicide, drugs, undocumented immigrants, crime bosses and slimy courtroom maneuvers. A dark look at justice on the streets of Paris, where money always win; brutal, shocking and highly recommended.

Aka “Sam Steele and the Crystal Chalice,” this is the second in a series of truly entertaining kid-vids about a pint-size Sam Spade and his gal-pal, Emma, who solve crimes inspired by their school assignments (with no small help from a comic canine). In this case it’s a race for a priceless Russian artifact with Kevin “Hercules” Sorbo and Dee “E.T.” Wallace along for the ride. Truly ridiculous, lively and fun; we liked it.

The proper title for this brilliant collection of Norwegian TV miniseries’ is “The Cato Isaksen Mysteries,” but poor package design makes that confusing. But there’s no confusion about the skills of prolific writer Lindell, who has created a character for the ages in Isaksen (Reidar Sørensen) and his oft-estranged wife Bente (Marit Andreassen). A police investigator and father of two boys, his personal life is a complete shambles; but, more importantly, every bizarre case – and each is a small masterpiece – seems to imply something about how his own life. For example, in “Drømmefangeren” (“The Dream Catcher”), while he struggles with the murder of a child who has been videotaped by a seeming perv, he learns that his eldest son is taking drugs. The way the two plots are blended together is breathtaking. Truly great TV.