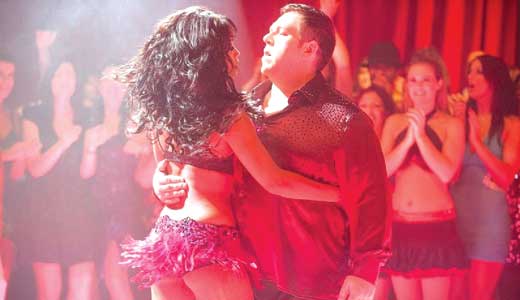 The great Nick “Shaun of the Dead” Frost is having a ball in this dance-movie parody, playing a fat, over-the-hill former would-be salsa champion who missed his big break due to bullying. Fast-forward to the present, and we meet his new American boss, smokin’/funny Rashida “Parks and Recreation” Jones, who clearly steals the movie. She’s out of his league but secretly yearns for a man who can dance her into ecstasy — and Nick intends to be that man! Lots of fun, and Frost’s dancing is … well, let’s just leave it at “lots of fun.” Watch for Simon Pegg in a blistering cameo.

A slow, sensual, up-close and personal tale of a young male dancer trying to forge a new life for himself amid the world of modern NYC ballet. Plagued by doubt, struggling with his sexuality and stained by his Midwest family’s wretched poverty, he wishes only to lose himself in the provocative and demanding world of dance. Seductive and beautiful.

Mozart and Julius grow into men in a depraved hell-hole called The Devil’s Cauldron, becoming the most feared hit-man team of all time, dispatching violent maniacs with cunning and lightning martial arts. All is well in their world until The Girl arrives. Both men desire her and, more importantly, see in her a future free of killing and violence. Stars Kazu Patrick Tang and Johan Kirsten as the men, and Macha Polivka (whom we guarantee you’ll be seeing more of in the future) and Guk Srisawat as the women, both of whom get nekkid. Yay!

A restorative — and surprisingly funny — indie tale about life, death and honesty starring Garrett Hedlund (“Inside Llewyn Davis”). He hurries home when he hears his estranged father (Richard Jenkins) has chosen to remove himself from life support, reconnecting with family and loved ones, including Amy Adams, Jessica Brown Findlay (“Downton Abbey”), Terrence Howard and Anne Archer. Writer/director Andrew Levitas has crafted a minor masterpiece so full of knowing humor and honest emotion that we can’t wait to see what he’ll do next.

We love these trips to the “murder capital of England”: that deceptively peaceful county of Midsomer where death hides just around 100-year-old hedges. Our favorite episode in this set has to be “Written in the Stars,” with police inspectors Neil Dudgeon (“Son of Rambow”) and Jason Hughes (“Waking the Dead”) investigating the death of an amateur astronomer during a solar eclipse. In classic BBC style, this devolves into a complex tangle of lies, half-lies and — worst of all — real truths that pierce the heart of a picturesque village. Masterful stuff.

While we’re not big fans of French TV in general, this is a gloriously entertaining and sumptuous trip back to the days of King Louis VX, courtesy of novelist Jean- François Parot. That’s where the titular young Parisian police commissioner plies his trade, moving in and out of churches and brothels, stately mansions and urine-soaked alleyways, always collecting clues, winnowing suspects and bedding bodacious beauties. Jérôme Robart from “A Burning Hot Summer” plays the sleuth with an exuberant combination of experience and surprise. Engrossing and fun; five episodes.

Many Christians were shocked by director Darren Aronofsky’s supposed biblical “liberties,” which introduced new characters and plot elements into the absolutely true and completely factual tale of a 600-year-old man who builds the largest boat in history to survive a global flood engineered to cleanse the human gene pool. Apparently the plan didn’t work, but it makes a big, noisy, fun movie. Russell Crowe doesn’t look a day over 523 as Noah, with Jennifer Connelly as Naameh, and help from Ray Winstone, Anthony Hopkins and cute little Emma Watson. Hey baby, whachasay we go forth and multiply?

We’ll watch absolutely anything with Catherine Deneuve, having fallen in love with her in 1964’s “The Umbrellas of Cherbourg.” Here she’s a much older and wiser woman — but not a day less beautiful — battered by life to the point she loses her sense of identity, becoming completely unconnected from everything around her. So she impulsively hops in a car with her little grandson and goes off on a road trip to introduce him to his estranged grandfather. It’s not the destination that counts.

Wow! This modern-day Limey political/industrial thriller is a mind-blower! Gabriel “Vikings” Byrne is a Deputy Prime Minister, looking for justice after an “accidental” industrial explosion kills a score of people. Then the PM’s plane crashes, putting Gabe in line for the headman’s job, the selection of which is orchestrated by Charles “Game of Thrones” Dance, a smarmy and ruthless Mitch McConnell-type who corrupts the process, playing all the candidates against each other for his real bosses: the big-money corporations — including the one Byrne is holding responsible for the calamity. Throw in imminent war, financial meltdowns and very personal secrets, and you’ve got one helluva good drama. From the BBC, of course.

If you are a fan of the “Dragon Tattoo” films/books, you’ll love this Danish TV international crime detective series starring Jens Albinus (“Borgen”) as Hallgrim Ørn Hallgrimsson, who earned his nickname of “The Eagle” because of his uncanny ability to spot clues others overlook. He assembles a team of experts with an emphasis on data mining and other fascinating computer techniques, magnifying his intuitive skills tenfold. The only techno/thriller show we’ve ever seen that really kicks ass.

A fresh and lively no-budget rehash of every teens-gotta-dance flick of the past two decades. OK, maybe we’re being too glib; let’s try again: Curvy Lexi Giovagnoli plays the would-be dancer whose career goals are upended at a new high school. Then she meets two hunky guys. Nice dancing and a cadre of giggly teen unknowns — some of whom we expect to see again — make this one of the more entertaining family friendly outings of the genre.

HALF OF A YELLOW SUN

Thandie Newton and Anika Noni Rose play rich, entitled, Western-educated Nigerian twins of the ’60s. Their families are shocked when one goes to live with college prof Chiwetel Ejiofor (who excels in the role, as always), while the other becomes a businesswoman and marries white-guy Joseph Mawle (“Abraham Lincoln: Vampire Hunter”). Then the real shock arrives: The Nigerian Civil War, arguably the most brutal, violent and savagely inhuman conflict ever launched by man. A powerful, surprising and richly detailed adult drama like they just don’t make anymore.

While not a “kiddie film” by any means, this is the type of thing that you ought to be showing your kids. It’s a documentary about the everyday life of three families living in the far north woods of Michigan, culminating in their annual snowmobile race. The race itself is a grueling 500-mile endurance test on solid ice, but the filmmakers cleverly reveal how this is just one in a series of life challenges that the families must take together if they are to survive — and every family member has an important part to play. Just like in your family. Good stuff.

Aka “Problem Children Are Coming from Another World, Aren’t They?,” this all-but-unknown-here animated Japanese TV hit is based on series of YA “light novels.” A trio of bored psychic children are whisked off to a magic realm called Little Garden where they learn to compete with other psychic children in mystic games for the honor of their chosen village. But the more they learn about their new surroundings the more sinister it all becomes, leading to an deadly uprising against the Demon Lords. At its heart, though, are simple lessons: have fun, make friends and try to understand others. A real treat for cutting-edge anime fans.

Picking up from the original 3-D kid-hit, we once again follow the animated adventures of Blu (Jesse Eisenberg), Jewel (Anne Hathaway) and their three chicks. Finding themselves suddenly in the Amazon, the family must adjust to life without the comforts and peace of Rio de Janeiro. Exciting, colorful, song-filled (“Poisonous Love,” with hints of “Phantom of the Opera” is particularly good), silly, harmless and surprisingly engrossing for adults and kids alike. What more could you want?