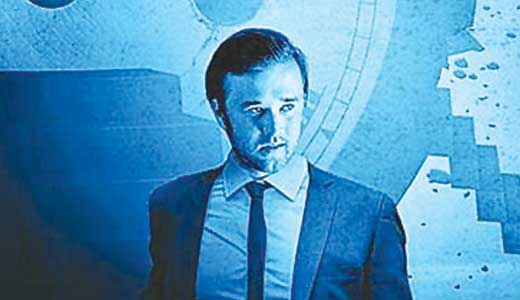 We love time-travel movies, especially when they’re as thought-provoking and human as this one. Gillian “X-Files” Anderson and Haley Joel “Sixth Sense” Osment star as the wife and now-grown son of a physicist (Rufus Sewell) who disappeared some years ago. But once the son grows into a physicist himself, he comes to believe he may be able to alter time and prevent his father’s disappearance (or something like that). More drama than sci-fi — though the science is excellent — brilliantly written, with a great cast. What more could you want?

Karen Gillan, Doctor Who’s mini-skirted ginger former companion, stars in this nicely scary horror flick, clearly influenced by the original “Twilight Zone” TV show. Extremely well written, with a cast that includes Katee “Galactica” Sackhoff and Brenton “Maleficent” Thwaites, it tells of a man (Thwaites), locked away as a child for the horrific murder of his parents. But his sister (Gillan) comes to believe that the real killer is a malevolent spirit hiding in an antique mirror. Chilling and creepy, with some fun jump-shocks, building to an all-out scream of a finish that’s surprisingly light on gore but nonetheless satisfying. We liked it.

While dismissed by some as “this year’s ‘Hunger Games,’” it takes a different approach to teen rebellion against society, and to good effect. Shailene Woodley is excellent (if a bit long of tooth) as a genetic misfit in a world divided into five “factions” — like-minded people representing the five traits most necessary for social stability, and who largely behave in predictable ways, making them easy to rule. Love, war, death-defying stunts, skin-tight leather, unrequited sexual yearnings and feelings of desperate isolation (sounds like our senior prom) make this a very watchable franchise.

This warm oldster BBC comedy series is a charmer. Two childhood would-be sweethearts, whose chance at a lifetime together was short-circuited by misadventure and a single unposted letter, meet again after 50 years. They finally marry, but now they each have adult daughters of their own, giving the geezers a chance to warn them on the vagaries of life. No one listens, of course. Stars Anne “Upstairs Downstairs” Reid and Derek “The Borgias” Jacobi as the ’rents, and Sarah Lancashire (“Coronation Street”) and Nicola Walker (“MI-5”) as the sibs.

A minor comedy so cleverly disguised as a no-rent ’80s teen hip-hop drama that we almost tossed it. But then we noticed it co-stars Susan Sarandon, Lea Thompson, Amy Sedaris and John Hannah! Newcomer Marcello Conte is “Rad Miracle,” a hip-hop-obsessed 13-year-old ping-pong-playing pasty white kid in 1985. In classic style, he experiences all the heartbreak of would-be love on vacation with his embarrassing family, until a more experienced neighbor (Sarandon) gives him the confidence he needs to succeed. A funny, painful, aching misfire by design. We loved it.

A quartet of breathtaking animated shorts by some of Japan’s masters of the craft. All feature exceptional soundtracks (we even ripped a few for car use), but the last in the set, “A Farewell To Arms” — created by Katsuhiro Ohtomo, who brought us 1988’s “Akira,” one of our Top-10 all-time favorite films — is the most profound, with engaging and very real characters coming to understand that, despite all our high-minded principles, man is a ruthless beast at heart, and war is our inevitable destiny. These are obviously mature movies meant for adults. Recommended.

This lesser-known Limey detective series stars charismatic Kevin Whately (“The English Patient”) as Jimmy Griffin, insurance investigator, former cop and full-time lady’s man whose roving eye and cunning mind make him a master at rooting out criminals and killers and killer-babes alike. Needless to say, his personal life is in the loo. Our favorites in this set include a deadly kayak trip and the interactions with his seriously rebellious daughter, played by Holly Davidson, who later co-starred in “Van Wilder 2.” Addictive and highly recommended.

No, this isn’t that old Roger Moore chestnut, nor is it the classic George Sanders or Ian Ogilvy series, nor even that unfortunate Val Kilmer movie of 1997. This is the late-’80s invocation of modern-day Robin Hood, Simon Templar, played by Simon Dutton (“Dangerous Beauty,” “EastEnders”), and it has quickly become our favorite. This set features three adventures filled with action, danger, sophistication, exotic locales, daring-do and curvy women — all without ever wrinkling his clothes! Watch for the great John Astin, bodacious Gayle “Hell House” Hunnicutt and underrated hottie Rebecca Gilling among the many guests.

This final chapter in The Unicron Trilogy finds Unicron defeated, but creating a black hole that is about to devour the Transformers’ home world. The Autobots and their three human friends set out on a desperate mission to locate the four Cyber Planet Keys, mysterious and powerful objects that can heal this rip in the universe. But those evil Decepticons want the Keys for their own nefarious ends.

Unlike many supposed “fan favorite” video sets, these entries really were determined through a BBC website – which they crashed – and we couldn’t agree more with their selections. Culled from the Masterpiece Mystery series, and starring David Suchet, of course, as the fussy Belgian detective, the six adventures include such perfect gems as “Murder On the Orient Express,” “The ABC Murders” and, a guilty pleasure of ours, “Four and Twenty Blackbirds,” which features Holly De Jong of “EastEnders” as a scandalous nude model. These things are addictive and oh, so welcome.

Originally titled, “Mindscape,” this deserved better treatment by the studio than a quick dump to video. Taissa Farmiga from “American Horror Story” is terrific as a troubled 16-year-old in a world where “memory detectives” use electronic gizmos to walk through the minds of others. Mark Strong, himself reeling from grief, is assigned to help her get her shit together, but this isn’t some shallow, flashy comicbooker, instead we get a deep, thoughtful thriller that moves slowly and carefully to an unexpected – and very cathartic – payoff. With the great Brian “RED 2” Cox and Indira “Game of Thrones” Varma. Recommended.

If you are a fan of Jude Law (which we are not), then you’ll love this vanity project in which he plays a verbose, overeducated, completely degenerate and just plain filthy safecracker, finally out of prison after 12 years of solitary confinement, looking to make a buck. His opening sentence – about his penis – clocks in at almost 3 minutes. A colorful dark comedy about crime, the nature of genius, chain-smoking, alcohol and ego, completely stolen by Law’s “right hand man” with no left hand, Richard E. Grant, best known to some as “Dr. Simeon” from Doctor Who.

Aka “Dream Deceivers: The Story Behind James Vance vs. Judas Priest” (1992), this is a master’s course on how to make a documentary. The story is well known: Two dark metalheads walk into a churchyard to commit suicide. One survives, horribly disfigured, and his parents sue Judas Priest for “causing” it all. But rather than pander to any particular point of view, the filmmakers shine the same light on everyone involved – and no one comes away looking pretty.

Ms. Maier was a complete nobody. A mousy, unassuming nanny who died in Chicago obscurity, with most of her personal possessions sent to auction. And that’s where a real estate agent named John Maloof purchased an unlabeled junk-box of old negatives and changed his life. The images made him fall in love with photography, in time coming to understand that these scraps were the work of a true artist who moved invisibly through the city’s heart – though not everyone agrees, begging the question, “What is Art?” This doc is both her story and his. An exciting dip into inspiration and human expression.

Aka “Getting Go, the Go Doc Project,” the moral of this gay tale is somewhere between “be careful what you wish for” and “wishes always come true, just not in the way you expect.” Doc (Tanner Cohen) is curiously infatuated with Go (Matthew Camp), a hunky male dancer that he finds unapproachable. So he decides to shoot a fake documentary about him as a way of getting closer – and he succeeds beyond his wildest dreams. But can a true relationship be built on a lie?

Paul Giamati, James Purefoy and Kate Mara starred in the original 2011 “Ironclad,” but this takes place after their kingdom has been overrun by the Celts, putting the action in the hands of Tom Austen (“The Borgias”), lots of Limey warrior-grunts and a truly spectacular bevy of supporting females – some of them nekkid – including Michelle Fairley, (“Game of Thrones”) Roxanne McKee (“Dominion”) and Twinnie Lee Moore from UK’s “The Voice” and our fevered dreams.

A gay romcom about a happy-go-lucky guy (Tyler “Scrubs” Poelle) about to propose to his true love when his true love dumps him for a (gasp!) woman. This sets into motion a warm and funny comic search for The Meaning of Life that is much more entertaining and mainstream than we usually see in this genre, finding universal truths – and pitfalls – that all adult audiences can relate to. From the director of “Holding Trevor,” with a great cast including Joel Rush from the “Eating Out” series and sexy-cute Jennifer Elise Cox from “Web Therapy.”

Rural France, like rural communities everywhere, are changing as new technologies and socio- political realities filter in from the outside. This colorful, poignant and warmly funny doc watches as the close-knit land of small family farms senses that their hallowed way of life is slowly evaporating. Some stubbornly plan to die the way they have lived, others find ways to include the intrusions into their lives. And all do it for their families. Nice.

The amazing Tony Jaa of “Ong-Bak: The Thai Warrior” continues his fight against … well, pretty much everything in this Martial Arts crime/actioner. Framed for the murder of the local kingpin, Tony must battle his past, the cops, another crime boss, and a particularly nasty pair of twins. Speaking of twins, check out Yayaying Rhatha Phongam who purrs “I owe you everything” to rapper RZA (who can’t act). Gives us chills. Woof. Not Tony’s best, but any Jaa is better than none at all.