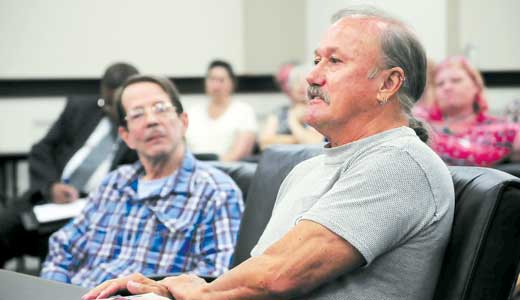 In a committee room in Frankfort, the seats are divided: Half of the witnesses are employed with Veterans Affairs hospitals, half are U.S. veterans. Some wear dress blues, some fatigues. Doctors and patients are here to speak before a swath of legislators at an Interim Joint Committee on Veterans, Military Affairs, and Public Protection.

Both groups are testifying separately, but both are here to talk about solutions to the growing post-traumatic stress disorder (PTSD) epidemic among Kentucky’s military population.

“I wake up at night in that nightmare, and I’m wringing with sweat, and I see Kramer, his dead body, Rodriguez, his dead body. I see Marlow blown up in front of me. I see the dead enemy hanging in a tree, bodies bumping against me and I don’t know if it’s theirs or ours. If that nightmare gets so bad that I can’t wake up and realize it’s just a nightmare, I will light the pipe up, I will be a criminal. I’ll go back to sleep, but the next morning, I’ll get up at 6 o’clock like I always do.”

That’s Tommy Belcher. He survived more than 80 night ambushes in the Mekong Delta during his deployment in Vietnam, and he testified before the committee. Against his VA doctor’s orders, Belcher says he weaned himself off of several overlapping prescriptions, using marijuana to treat his PTSD.

Thomas Vance is a retired Air Force master sergeant and the senior adviser for Veterans for Medical Cannabis Access. “My post-traumatic stress disorder is from childhood sexual abuse that happened when I was around 8 or 9,” says Vance. “So by the time I was 14, I was a full-blown alcoholic, because I would get Dad’s bourbon out from under the sink and, when I drank a little bit of that, everything was OK. All those nightmares and all those terrible people coming at me — that didn’t happen anymore.”

He isn’t the only soldier whose combat PTSD merges with sexual trauma.

“We are seeing an increased amount of male and female veterans coming in reporting military sexual trauma,” says Dr. Mary Sweeney, who works at the Robley Rex VA Medical Center in Louisville. “Fifty percent of people who experience a rape go on to get PTSD. The numbers are lower for combat. Vietnam veterans, probably 30 percent at some point in their life. Gulf War veterans, perhaps 10 percent. The numbers are still out on Iraq and Afghanistan veterans, but in terms of just the likelihood of developing PTSD, it gets no higher than rape.”

Sufferers of military sexual trauma have a harder time getting benefits from the VA. Additionally, the Department of Defense Inspector General found that more than 10 percent of allegations of sexual assault in the military are not even investigated. The sexual assault crisis in the military also dovetails with an uptick in Kentucky’s veterans on opioids.

“We don’t hardly see anybody on pills anymore because the pills have been cleaned up, but, of course, now it’s heroin,” says Sweeney. “We even found a hypodermic on the unit not long ago.”

When Rep. Tom Burch, D-Louisville, asked about the suicide rate for veterans, VA officials said they were unable to locate current statistics.

Those statistics are out there. They’re in a 2012 Suicide Data Report from the VA. The VA Suicide Prevention Program attempted to gather the number of suicides from each state, but the study ran into problems when states like Kentucky received, but did not fill out, requests for suicide data from the years 1999-2011. This required the VA to attempt to accumulate each state’s overall suicide rate and hope the death certificates told them whether the victim was a veteran.

The same study indicates that Kentucky was supposed to have reported its data by the summer of 2013, though no updates have been issued containing Kentucky veteran suicide rates.

What does the report say about the number of veteran suicides nationally? About 22 veterans commit suicide each day in the U.S.

“When you asked how big is the problem, not only do our veterans come back with PTSD, or develop PTSD sometime after becoming a civilian, many veterans have co-morbid disorder,” says Sweeney, meaning that the trauma they’ve experienced has caused overlapping issues such as substance abuse, general anxiety and depression.

“That schema right there looks like my typical patient,” she says, pointing to a graphic projected overhead. It’s a diagram resembling a Russian nesting doll, a large circle with smaller circles of overlapping psychological problems.

Nationwide, more than 350,000 veterans have been given a PTSD diagnosis. That’s 18,531 in Kentucky. And those are only from Iraq and Afghanistan.

While medical marijuana as a treatment for PTSD relies heavily on the wide swaths of anecdotal evidence, the testimony is large enough that nearly a dozen states have added PTSD to the list of conditions for which doctors can prescribe it. Additionally, the Veterans of Foreign Wars have passed resolutions adding their support of the treatment.

When asked by committee co-chair Sen. Jimmy Higdon, R-Lebanon, whether the VA officials might offer an opinion on medical marijuana use for PTSD, Sweeney bunts. “We look pretty extensively, and there is no evidence at this point for the use of medical marijuana in the treatment of PTSD,” she says. “A lot of veterans will say anecdotally that it does help with calming them down, and with sleep and things like that, but the research just isn’t there yet.”

Actually, there has been a wide range of studies related to the effects of marijuana on PTSD, mood disorders, depression and anxiety. Many are found online, available with only a cursory search of publication archives. Further, the number of federally funded marijuana projects rose from 22 in 2003 to 69 in 2012, with the National Institute on Drug Abuse alone funding 30 studies on the therapeutic uses of marijuana.

In fact, the call for research is so loud that the DEA has had to increase the supply of research marijuana from 21 kilograms to 650 kilograms this year just to accommodate the need. This preempted the DEA’s announcement that they’re flirting with the idea of reclassifying marijuana as a Schedule II narcotic to allow for even wider testing and research options.

Nationally, the White House is showing signs of backing down from the War on Drugs as well. As federal and state prison populations bloat unmanageably with a glut of non-violent felons, a recent proposal would reduce sentencing for more than 20,000 inmates serving time on drug-related charges. The proposal follows on the heels of their announcement that medical marijuana should be considered a state’s rights issue.

As the U.S. approaches a tipping point in the path toward the legalization of medical marijuana, Higdon says Kentucky’s own legalization is inevitable. In the meantime, the lines are getting longer here for the veterans who are waiting.