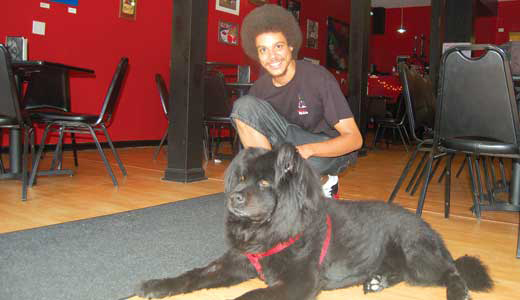 Operating out of the Old Louisville neighborhood for nearly three years, Smokey’s Bean coffee shop (1451 S. First St.) is named after the mellow chow-lab mix that is a constant presence in the somewhat uniquely dog-friendly local business. Soon the business will truly be breaking unique ground in Louisville, as it is set to become the first unionized coffee shop in Jefferson County.

While there has been a growing national movement to unionize low-paid fast-food workers, labor organizers believe Smokey’s Bean will be the first of its kind among service-oriented businesses in Louisville. And unlike the case in many union drives, the owner is choosing to embrace the move instead of offering resistance.

This process began by chance with a conversation in the shop between longtime employee D.J. Lee and Flaco Aleman, the executive director of Kentucky Jobs With Justice. Aleman gave some materials to Lee, who shared them with Smokey’s Bean owner — and his mother — Erin Lee.

“I’m 100 percent behind it,” says Erin Lee. “We have a local artisan roaster, we do local gardens, everything is local. And to me, (United Food and Commercial Workers Local 227) is a local union. Small businesses build neighborhoods, and neighborhoods build communities. (UCFW) is a huge community, and I have no problem being a part of it. I think it’s a win-win for an employer and an employee.”

Whereas some business owners recoil at the thought of workers unionizing, Lee says she researched the matter enough to find that this will not only help her three employees, but also her business.

“It costs so much to train someone,” says Lee. “I’m paying new employees above minimum wage, and then I have to pay someone to babysit them while they work here, because they can’t be left alone. So (UFCW) suggested that you start out at a lower wage, and, after 90 days, your wage will move up. Which is a great incentive for an employee, and it also saves me a little bit of money in the training process.”

Lee adds that the contract will also provide much-needed structure that will make her job easier. “It takes pressure off of me because everything is in black and white … the 90-day probation period, the pay rate, your raises. It protects the employee, but it also makes it easier for me if everybody’s on the same page.”

D.J. Lee says that while $7.50 will come out of his paycheck in union dues, that is outweighed by the benefits, such as special discounts to use at other businesses, a survivor benefit and a clear policy for time off and grievances.

“When you’re requesting time off, the contract tells you how much in advance you’re supposed to give them, or what you can do if you need time off and you’re not getting it,” says D.J. Lee. “It will go both ways.”

Aleman of Jobs With Justice says that another restaurant in the West End is also close to finalizing a union and hopes these positive experiences free of conflict will show other owners and workers that unions aren’t the boogeyman that anti-labor critics portray them to be.

“It doesn’t have to be adversarial, and it can work for everybody,” says Aleman. “It adds a layer of accountability in both directions: The owner is accountable to the workers and the workers to their agreement in the contract, and the union is accountable to protect and represent the workers, but to also show how they can benefit the business as well.”

Harold Embry of UFCW Local 227, who organized Smokey’s Bean, says that such businesses will not only add this layer of accountability and a stable pool of workers, but additional business.

“One immediate effect they’re going to see is we have 24,000 members, the largest local in the state of Kentucky and Jefferson County,” says Embry. “So immediately we’ll get coupons out to all of our members about Smokey’s Bean, and hope that they’ll stop by there and try a cup of coffee. She’s going to get immediate exposure that will not cost her a penny.”

Embry says the success of a unionized shop such as Smokey’s Bean would provide tangible evidence that combats the message of a well-funded anti-labor movement. “When you have so much anti-union stuff hitting the street on a daily basis, it’s hard to be able to get people to look at things in a positive light. We can’t afford to hire a PR firm to go out here and promote us, so it takes actual experiences for people to have with us to make them understand that these guys aren’t bad at all.”

Aleman says they plan to hold public meetings in the near future where restaurant and service workers can have their questions answered about employers failing to comply with wage and hour laws, and how a union contract can address their issues.

“One key question is, how does the restaurant and coffee shop world react to this?” asks Aleman. “Hopefully this could spread to other places if we break down misconceptions.”

Asked about their rather unique situation of having a mother-son/union-boss relationship, D.J. jokes that he hopes he doesn’t have to play hardball.

“He better not!” says Erin Lee. “He still comes over for my Sunday dinners.”

“We can still do that,” says D.J., adding with a laugh, “I’ll picket Saturday and I’ll be over Sunday.”