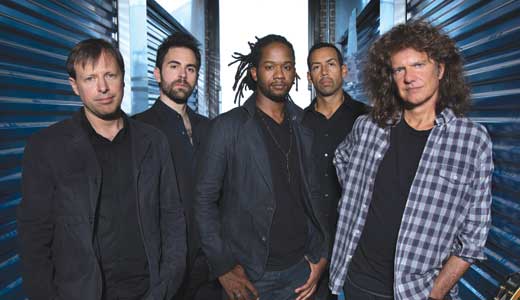 Perhaps more than anyone since Herbie Hancock and Chick Corea, Pat Metheny has drawn a wide non-jazz audience to his music, yet he remains true to the inquisitive nature of the art form. From his earliest national exposure as a member of Gary Burton’s band, through his solo debut in 1976, on through the recently released Kin (<–>), Metheny has not stood still, incorporating influences from mainstream jazz to folk to Brazilian and more. His current band, the Pat Metheny Unity Group (PMUG), is his first to include a saxophonist, Chris Potter, since his seminal 80/81 band with Michael Brecker and Dewey Redman.

He decided to write for and perform with saxophone again because of his admiration for Potter. “He is one of the most powerful musicians on the planet right now. So, maybe I had to wait 30 years for Chris to show up to get inspired to write for the horn the same way Mike and Dewey inspired me all those years ago,” says Metheny. “I can’t really say enough about Chris — he is one of the greatest musicians I have ever known, and every second I have been on the bandstand with him has been an absolute pleasure. There is no drama or insecurity, just music all the way. And he is one of the few musicians I have ever been around who has the same kind of work ethic I do — he gets there early every night and works on music for hours in preparation for the gig.”

Metheny also discussed his other bandmates, noting that a common theme was their displays of both high levels of musicianship and professional, hard-working attitudes.

“I can’t say enough about Antonio Sanchez. As I often say, he is the drummer I thought would never be born. He has certainly been my most important collaborator over these past 15 years or so. He certainly is one of the most technically accomplished drummers in the world, but the main attraction is his innate musicality. He really has a sense of the bigger picture at all times, in every playing situation.”

Bassist Ben Williams was recommended by Christian McBride. “Ben is the perfect complement to this band — he brings a youthful spirit and dimension,” Metheny says. “And he continues to get better and better. He is a fantastic person, too, which makes it all the better.”

Between the release of Unity Band in 2012 and February’s Kin (<–>), Metheny added multi-instrumentalist Giulio Carmassi, “to do what I wanted to do,” he says. “I wanted to expand the palette by adding another musician to play parts. However, I didn’t want to alter the incredible dynamic of the quartet. I didn’t really need another soloist or creative force, especially with Chris Potter standing right there, but I did need someone who understands the language we are dealing in and can contribute in a textural way, and give me another voice to write for.”

Metheny released Orchestrion in 2010 and played here on that tour, “accompanied” only by a large collection of instruments (visually resembling the background of the Lonesome Pine Specials concerts), which he could control while playing guitar. “I would say that it is important to add — probably at least as significant or more so to the difference in the conception of this project to the one before — was my decision to do so much electronics and orchestrionic stuff,” he says. “I usually have not done that in these types of settings. That may be the most significant difference between the first Unity Band record and this one. I have been trying to explain it for about five years now unsuccessfully — so now I have given up and just tell people it is magic, and leave it at that!”

The interview closed with additional observations by Metheny on his long-term plans. “I never expected (PMUG) to have the kind of impact that it has wound up having — I don’t think any of us did. Who knows? I might try to get everyone together again in a few years. It really has been an unbelievable ride, and every night continues to be amazing for all of us. Live is always the final destination. Everything leads to the gig. The concerts are the most important and the most fun aspect of what being a musician is for me.”