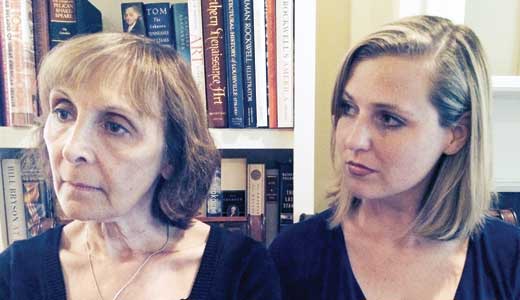 We all have stories. Some, like Lisa Morrison, would argue that those stories are who we are, and we are nothing without them. Donald Margulies’ play focuses on those stories, the people who tell them and the relationships surrounding them.

“Collected Stories” begins with the meeting of Ruth Steiner (Carol Dines), an aging yet sassy professor and author, and Lisa Morrison (Lenae Price), one of her eager but anxious graduate students. Lisa has looked up to Ruth since high school English class and is now sitting in her living room, being mentored by her writing idol.

As time goes on, the two become more and more intertwined. They fight about keeping secrets. They celebrate publishing contracts. They argue about how to organize mail. They become close. So close, in fact, that Ruth goes against her general principle of not telling stories but writing them instead. She tells Lisa of when she met one of her literary heroes, a man who was past his prime even at age 44. As a virgin and a college co-ed of 22, she was swept away by him, ultimately having an affair with him. Although it affected her deeply, Ruth never wrote a story about it, saying, “Some things you never touch.”

A few years later, Lisa writes a novel about Ruth’s affair as a follow-up to her original collection of stories from her own life. Ruth, now sick, fights with Lisa about the essential questions of the play: Is it OK to exploit a friend’s history for art? Can you portray a minority without being in that minority? Are we really anything without our stories?

Set in Ruth’s apartment in Greenwich Village from 1990 to 1996, the never-changing living room set is homey — clean but clearly lived in. Designed by director Andrew Epstein and artistic director Doug Schutte, the set includes details that would only be possible if Ruth truly lived in the apartment for the past 30-odd years.

It is rare to see a cast of characters consisting of only two people, and even more unusual if they’re both female. The minimal cast allows for the play to focus on their connection, which Dines and Price portray beautifully. Actions toward each other match the state of their relationship: a tad awkward upon meeting, sincerely supportive in the middle, and angry and frustrated as their relationship crumbles.

Separate, the actresses were just as marvelous. Dines portrays Carol with sass, becoming increasingly biting until it turns into bitterness near the end. Price effortlessly increases Lisa’s confidence as she transitions from anxious student to praised budding author. Although there were rarely moments where the two were not interacting with each other, they had interesting personalities that could stand alone, but were better when paired with each other.