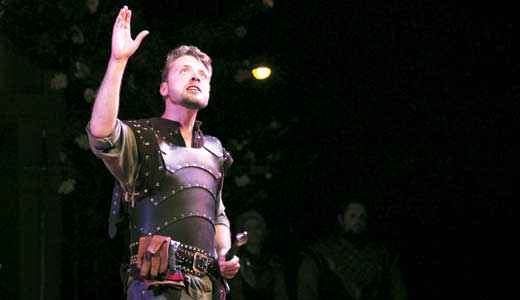 At this time last year, Kentucky Shakespeare was a company in shambles. Offstage dramas led to the early cancellation of the season, and there was reason for the community to question whether the show would ever go on.

Happily, the answer to that question was a decisive “Yes.” This summer’s Shakespeare in the Park season is the most ambitious in the company’s history, with a total of eight productions — three from the company itself, one student production and four mounted by outstanding partner companies (Le Petomane, Walden Theatre, Savage Rose Classical Theatre and Shoestring Productions).

Drawn by superb productions (and fabulous weather), crowds have been enormous and enthused. And every person who takes a seat in the C. Douglas Ramey Amphitheater from now through the season’s end (Aug. 17) adds a new number to already record-breaking attendance.

As this issue of LEO hits the streets, there’s still time to take in the three Kentucky Shakespeare productions, which close Saturday with a “Bard-A-Thon” three-play sequence that starts at 4 and will likely run until past midnight — which means an appetizing opportunity to see “Hamlet,” the last play of the evening, play out in the dark of night.

Helmed by Matt Wallace, the company’s new producing artistic director, the first production of the season, “A Midsummer Night’s Dream,” was magnificent.

Director Amy Attaway, one of the most enterprising and imaginative theater people in the city, crafted a muscular, witty, streamlined “Henry V.” Matt Lytle delivered a finely honed, three-dimensional portrayal of the title character. And a large cast (many in multiple roles) offered stellar portrayals that captured both the sleek bureaucratic corruption of the English and French courts (special mention to Tony Milder as the horse-loving Dauphin) and the ribald energy of the soldiers and common folks (Kyle Ware, Daniel Hill, Zachary Burrell, Greg Maupin and more).

Against the backdrop of this macho world (including grand battle scenes choreographed by J. Barrett Cooper), some of the strongest performances came from women. As the “Chorus,” Megan Massie was a splendid guide to the action. Then she shifted gears to become Princess Catherine — whose droll English lesson with Alice (Abigail Bailey Maupin) is perhaps the most delightful, laugh-out-loud scene of the summer. Maupin also shifts gears to offer an electrifying performance as the Duke of Bourbon. And when it comes to shape-shifting, Karina Strange is not to be outdone, morphing from the brazen Mistress Quickly to become Captain Gower, the comic foil for Greg Maupin’s thickly accented Fluellen.

Matt Wallace also directed “Hamlet.” Using a streamlined text, he built a production that was clear, effective and admirably suited to the park. His Hamlet (Jonathan O’Brien) mostly cultivated an indignant, declamatory style, but the graveyard scene was darkly reflective, and the bedroom scene with Gertrude (Abigail Bailey Maupin) was fraught with tension. It’s Jon Hoffman’s portrayal of the murderous Claudius that distills the perplexing essence of this play — especially in his riveting delivery of the “O, my offense is rank” soliloquy.

And with upcoming performances of “Love’s Labour’s Lost,” the seldom seen “Pericles,” “King Lear,” a collection of scenes and soliloquies highlighting “The Women of Will,” and the farewell performance by the brilliant company Le Petomane in “As You Like It,” the season still has much to offer.