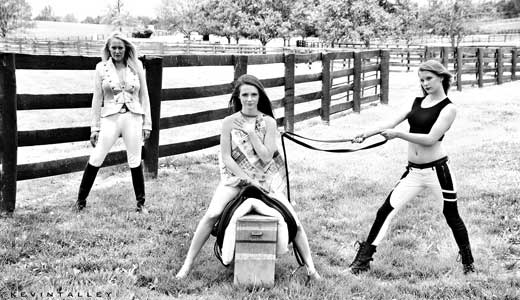 Jason Lescalleet isn’t your typical musical artist. He records and performs his bizarre, experimental songs on equipment (lots of old tape decks) that most would call archaic at this point. However, his sound is far ahead of that of his contemporaries, playing more like something people in a futuristic sci-fi movie would listen to in their hover cars. He has enlisted the help of 13 filmmakers to create videos for each of the tracks on the first disc and film, “Trophy Tape,” off his newest album, Songs About Nothing. The 36-minute ordeal will be followed by a performance by Lescalleet himself. His plan is to play at or near the hometowns of each of the videographers, one of them being Robert Beatty of Lexington. —Ian Ording

When you first hear of a band called Hundred Waters, you might assume it will be simply a recording of a babbling brook. However, Hundred Waters is what a babbling brook would be if you added lyrics and changed the real brook to more of a techno-pop brook. Would you really expect a soundtrack of a river from a group signed to Skrillex’s recording label? I didn’t think so. The Gainesville, Fla., quartet all dabbled in music for years but maintained their independent projects until they noticed that the combination of their music seemed better together, thus creating Hundred Waters. Their latest, The Moon Rang Like a Bell, was released in May. Mas Ysa, aka Thomas Arsenault of Brooklyn via Oberlin and Montreal, will open with an indietronica set. —Olivia Krauth

Kevin Talley has a grab bag of a résumé: model, airline ramp worker, writer for his self-help blog, “Tall Guy with a Camera” and, most recently, photographer. The self-taught artist, who’s pretty tall and is often seen with a camera, found quick success with his series “Urban Ballet,” which exhibited at the Brown Hotel in his first year as a photographer. In what Talley describes as “something like French Vogue meets Equine,” his third series, “Equus Fem,” consists of portraits of racehorses and the families of horse professionals. The reception for the gallery will be held at Old 502 Winery, Kentucky’s only urban winery, where there will also be drinks, appetizers and entertainment. To quote my own self-improvement blog, “Average Guy with a MacBook,” “If there’s free food, go there.” —Matthew Adams

After a painful, treacherous year in AP English literature, it is difficult for me to even think of classic authors such as Jane Austen. Thankfully, there are several people who don’t have the same problem. The Jane Austen Festival is for those people. In its seventh year, the festival spends a weekend paying homage to the “Pride and Prejudice” author and the Regency era. It prides itself on being the largest Jane Austen event in North America, which does not surprise me. This year will showcase daily afternoon teas, a marionette show and vendors specializing in Regency-era items. Make sure to come dressed in your Regency attire, as the event will try to break the Guinness World Record for most people dressed in, well, Regency attire. Two British authors will also make an appearance. —Olivia Krauth

Preservation Louisville is treating us to an exhibition of the past and present. The two-part show features drawings by Alexander Van Leshout of 1920s Louisville alongside contemporary photographs by Dennis Crews. Van Leshout was a cartoonist for The Courier-Journal and taught drawing at the Louisville School of Art. Crew is a former Louisvillian whose “Louisville Then and Now” project was inspired by Van Leshout’s drawings. The differences in media (drawings vs. photographs) help place viewers in the respective time periods. Crews will be at the reception held on Thursday from 5:30-7:30 p.m. Preservation Louisville is also launching their new fundraiser at the reception; they have partnered with Artedibles to create the facades of several local historic homes out of chocolate. —Jo Anne Triplett

In 1999, when Maxwell released “Fortunate,” I was in love … with him … and his song. I loved his silky smooth voice and the way he melted my heart like a dab of butter on a steaming pile of mashed potatoes. I had never been in love back then, but he made me believe it was possible — that some day my prince or, as it turned out, princess would come and sing these lyrics to me: Fortunate to have you, girl / I’m so glad you’re in my world / Just as sure as the sky is blue / I bless the day that I found you. Even today the song can stop me in my tracks as I’m pushing a cart through Kroger or stepping onto an elevator. I love you, Maxwell! He stops by the Palace Tuesday night, his first major tour since 2010. —Sara Havens

Wye Oak, the band’s namesake, was the 460-year-old honorary state tree of Maryland before being destroyed by a lightning storm in 2002. I thought there might be a metaphor there, but I’m just not seeing it. Wye Oak, the band, is currently touring in support of their newest LP, Shriek. This album finds the Baltimore-based duo trading in histrionic, reverb-heavy guitar jangles for slightly brighter synth rhythms — but don’t worry, vocalist Jenn Wasner doesn’t let things stay cheerful for long. Throughout this tour, the band has been working with Air Traffic Control, donating $2 of every sold ticket to a local charity, so you don’t have to feel bad. Former-quartet-now-twosome Pattern Is Movement opens, bringing the many melodic vocal harmonies of their newest, self-titled album. —Matthew Adams

Although they pop up occasionally, we usually don’t expect to find words in visual art. That’s reading, not seeing. But what if the work is made up of words, where what is printed is the art? Welcome to “word. object.” Artist Douglas Lucas has curated a group show that features art made of text as well as found objects. The featured artists, a thought-provoking bunch, are Valerie Fuchs, Nathan Hendrickson, Russel and Shelley Hulsey, Thaniel Ion Lee, Norman Minogue, Gibbs Rounsavall and Lucas. “The theme of the exhibition is the aesthetics of appropriation along with the associative powers of language and objects,” says Lucas. “The artists deal with such issues by exploring the realms of pre-existing text as well as found materials to discover their intrinsic aesthetics.” —Jo Anne Triplett

‘No One is Perfect’

There was a time when someone having tattoos meant they were to be feared. You saw a dude with a tattoo, and he probably had a knife on him, too. Nowadays, however, 45 million Americans have at least one of them (tattoos, not knives), and it has become much more of a regularity among the non-criminal population. As a result, it’s an art form in its own right. Ultra Pop! is celebrating this fact with their upcoming art show “No One is Perfect,” which features art from Liberty Tattoo and Art Parlor owners Suzanne Edds and Gary Bell (not all tattoo-based). The works are available for purchase, and carrying one out will make you look about as badass as that barbed wire around your biceps. —Ian Ording

The University of Louisville Hite Art Institute is currently showing the works of Ohio-based artist Helen Tegeler in the nature-inspired exhibition “Growth.” The show “brings together (Tegeler’s) love of plants and the human desire to collect, classify and ultimately define life and our understanding of the world.” A visiting U of L faculty member and alleged tree-hugger, Tegeler worked primarily with glass before expanding to include new media in order to “explore new visual and tactile qualities in her work,” she says. Reportedly, glass was intimidated by the task of solely representing the human desire to define life, forcing Tegeler to look elsewhere. —Matthew Adams