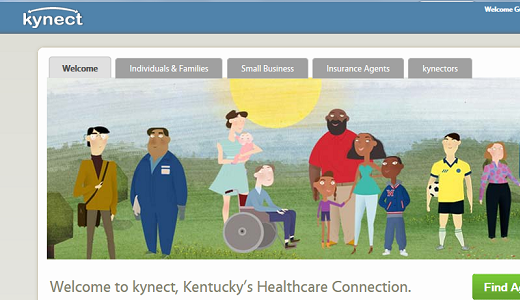 According to new statistics obtained by LEO Weekly from the administration of Gov. Steve Beshear, tens of thousands of Kentuckians who purchased private health care coverage on Kynect, the new state health benefits exchange, are saving more than $200 each month on their insurance premiums through federal tax subsidies made possible by the Affordable Care Act.

While tracking changes in the total cost of health insurance coverage for individual consumers from before the implementation of the law is a daunting task, these new numbers suggest that ACA critics who accuse "Obamacare" of producing "sticker shock" and "skyrocketing premiums" may be overstating their case.

Kynect officials say that of the 82,795 Kentuckians who purchased a qualified health plan (QHP) through the state exchange, 74 percent of them received federal subsidies to help pay for their premiums. Of those who received such assistance, their average premium was reduced by 74 percent.

These numbers are extremely similar to those of a new U.S. Department of Health and Human Services report on individuals who purchased QHPs through the federal exchange because their state chose not to create its own exchange. In those 36 states, the average premium for such individuals before tax credits was $346, but they averaged $264 in subsidies to reduce their average premium cost to $82 per month.

While the average premium under Kynect was slightly higher than the federal exchange, this is likely due to Kentucky deciding to expand Medicaid, as many of those low-income individuals would have had a very low premium if they had purchased a QHP. However, for those 26 percent of individuals in Kentucky whose income was too high to qualify for federal tax credits, their premiums remained quite expensive, relatively.

While the conservative Manhattan Institute think tank recently released a study showing that Obamacare had caused premiums to skyrocket by 49 percent — and has been cited heavily by Republican critics of the law — the study was flawed in several ways. First, the Manhattan Institute did not factor in federal subsidies to reduce premiums, which a large majority of those purchasing QHPs on exchanges were able to use and dramatically slash premium costs. Secondly, their study compared apples with oranges in terms of individual health plans. They compared the price of so-called "junk plans" — with little benefits and of little use when faced with a medical emergency — in place before the ACA went into effect with the bronze and silver plans under the ACA that have much more comprehensive benefits.

But even without factoring in federal subsidies, many argue that the increased costs of premiums under the ACA is neither dramatic nor out of the ordinary. A new report by Dr. Jonathan Gruber of MIT found that insurance premiums were already increasing by over 10 percent each year before the ACA went into effect, which would have likely continued to do so without the new health care law. According to the most recent figures from the Kaiser Family Foundation, Kentucky’s average premium on the individual market was $210 in 2010. Assuming a 10-percent annual increase in rates, such premiums in Kentucky could have averaged more than $300 by now, similar to what they currently are on Kynect before subsidies.

Such premium rates might have been similar to the current pre-subsidy rates under Kynect, even though Kynect plans are necessarily higher due to QHPs requiring a comprehensive coverage package and insurance companies now being barred from discriminating against and denying coverage to individuals with pre-existing conditions.

The controversial health care law remains a political hot potato nationally, including in Kentucky’s heated U.S. Senate race. Whereas Democrat Alison Lundergan Grimes favors keeping the law in place and fixing its shortcomings as they emerge, Sen. Mitch McConnell has repeatedly advocated a full repeal of the law, "pulling it out root and branch."

One solution McConnell has advocated to replace the ACA is bringing back Kentucky’s "high-risk pool" — Kentucky Access — for individuals with pre-existing conditions who couldn’t find an insurance company that would cover them. However, Kentucky Access was never popular, with less than 4,000 Kentuckians using it. Part of the problem was cost, as the average premium for individuals was $680 per month, with the most popular plan with a pharmacy rider having a monthly premium of $1,118 for a 64-year-old male.

McConnell also suggested recently that Kentucky could keep Kynect in place, even if Obamacare was repealed. While the state could conceivably keep the website in place, ACA’s repeal would make it virtually worthless, as more than 300,000 Kentuckians would lose access to expanded Medicaid coverage, and those purchasing QHPs would lose the $257 average in premium assistance every month, if not their entire comprehensive private plan itself.

Audrey Haynes, secretary of Kentucky’s Cabinet for Health and Family Services, tells LEO she is thrilled by the success of Kynect and the ability of individuals to purchase affordable and comprehensive coverage under the exchange, the prices of which may remain low as new insurance providers enter Kynect this year.

"Through Kynect, Kentuckians qualified for nearly $65 million in premium assistance and cost-sharing reductions to help make health insurance more affordable," says Haynes. "Now, as we prepare for our second open enrollment starting Nov. 15, we are extremely pleased to welcome additional insurers to the exchange, including Caresource, Wellcare, Dentegra and Delta Dental of Kentucky and the expanded options they offer to consumers. With more choices, we hope even more Kentuckians will take the time to shop and compare plans on Kynect."

Congressman John Yarmuth of Louisville, the only defender of the ACA among Kentucky’s congressional delegation, says these new numbers are more proof that Kynect is working, and those who seek ACA repeal do so against Kentucky’s best interests.

"With premiums cut by an average of 74 percent and tens of thousands of Kentuckians signing up for health insurance through Kynect, it’s clear health care reform is working in Kentucky," says Yarmuth. "I’ve met people whose lives have been saved because of their new coverage, and it’s up to Sen. McConnell to explain why he wants to take that away."