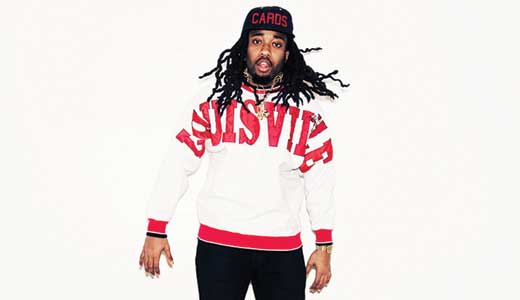 From its humble beginning as a locals-in-Tyler-Park day to today’s big-time international attraction, the Forecastle Festival has continued to book a handful of local acts alongside many bigger touring names. LEO asked a pair of notable locals playing this year, rapper Jalin Roze and Edward Grimes, drummer/vocalist for the trippy noir-rock band Seluah, for their thoughts about festival season.

LEO: Who are you most excited about at Forecastle?
Edward Grimes: Beck, Slint and Dwight Yoakam. I’ve never seen Slint live; I’m a huge fan of Beck and I’m hoping he plays some really old lo-fi oddities; and I think Dwight is just gonna win me over one way or another.
Jalin Roze: I have to say I’m most excited about Outkast and Action Bronson — and Gary Clark Jr. is dope as well.

LEO: What local acts should play next year (that aren’t on this year)?
EG: I recently saw a marvelous show that featured the Ritchie White Orchestra and Trophy Wives — they would both be fantastic. I’d also say Watter, Parlour and Sea Hero, for sure.
JR: Oh, man, there are a ton of artists that should play next year … I could see Skyscraper Stereo, Taylor Rodgers, Domdi, PlayCold, Bird Zoo, Bonez, Touch AC, Actual People, Allen Poe, BST Gang, D. Fresh, T-Razor, T-McAfee, B. Simm, or any of those guys playing, as far as hip-hop goes.

As far as rock goes, I could easily see my boys Nerves Junior playing. I’m surprised they aren’t playing this year, as well as White Reaper, The Debauchees, Jenna Dean, The Deloreans, my homies Houndmouth, and The Pass, but I think both played last year.

LEO: If you had your own fest, who would you want to play?
EG: Nick Cave & the Bad Seeds, Portishead, DJ Shadow, Aphex Twin, Blonde Redhead, Apache Dropout, TRS-80, Kraftwerk, Suicide, Tangerine Dream, and Matmos.
JR: It would have to be a hip-hop/rock mash-up festival, because we don’t really have one here, and it would be headliners Jay-Z, Kanye, Nas, Coldplay, Isley Brothers, Hall & Oates, Stevie Wonder, (comedian) Dave Chappelle, Wu-Tang Clan, and Prince as the festival closer … And a mash-up local rap set on the main stage with The Roots backing.

LEO: What is the best thing about music festivals?
EG: People are really happy to hang out and see many acts, which is a great deal if there’s lots of folks you wanna see.
JR: The freedom, honestly. I love how free festivals feel. There is no discrimination, no boundaries, no such thing as “weird” at music festivals. It’s just freedom to feel music, and that’s what I love.

LEO: What is the worst thing about them?
EG: It’s very easy to get sunburned and dehydrated. And although everyone is generally cool, you sometimes wanna get away from everyone and decompress.
JR: The heat! You just got to man up and keep a towel and water with you.