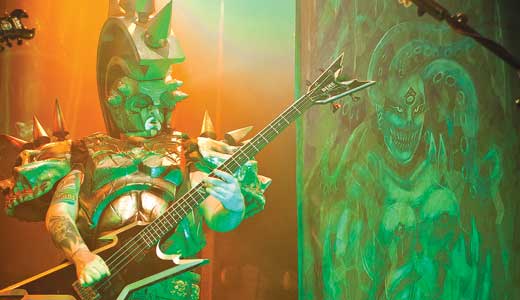 When Louisville metal mainstay Jamison Land got the call to join Gwar, a band he had loved since high school, he could not have been happier. But his dream soon turned into something much more tragic than anyone could have expected.

Founded by vocalist Dave Brockie (who played the character Oderus Urungus) in 1984 in Richmond, Va., the satirical, costumed band has long been known for their outrageous live show and mythology. Land met Brockie through a mutual friend and eventually became roommates with Brockie and rhythm guitarist Mike Derks (aka Balsac the Jaws of Death) for a while. When previous bassist Casey Orr — whose character was Beefcake the Mighty — left, Brockie called Land to put on the 70-pound Beefcake costume.

“I grew up on Bardstown Road,” says Land, an Atherton grad who fondly remembers shows at The Machine and Pandemonium. Previously best known for his work with the band The Burial, Land had moved away but came back home to help his family after his father died. He took a job driving a truck between Louisville and Chicago several times a week — a job that paid more than he’d ever made from music. Land had reached the point where he could accept that his music dreams were not going to be more than a hobby when Gwar called.

Land was on his first tour in 2011 when guitarist Cory Smooth (aka Flatus Maximus) suddenly died from complications of coronary artery disease. On March 23 of this year, Brockie, 50, the last original member, suffered an accidental and fatal heroin overdose. “We’ve had some tragedy,” Land says with a noticeable amount of understatement. “But there’s a legacy here. (Brockie) devoted his whole life to doing this, and we have to continue on and do it for him.”

Last month, Land put together a benefit in Louisville for the Dave Brockie Fund, with proceeds benefiting the arts. But Land couldn’t be there. “I’m doing chemotherapy right now. A couple of months ago, I found out I had testicular cancer,” he says. “I found it real early, so they took it out immediately. My tests are all clear. They made me do two sessions of chemotherapy to reduce my rate of reoccurrence from 50 percent to 5 percent. I’ve got a few months of not feeling so great, but then I’ll be healthy again.”

Former bassist Michael Bishop will fill in on vocals when they perform at their fifth annual Gwar-B-Q festival next month in Virginia. “We’ve been practicing with him,” Land says. “It’s great to get back and start doing some music.”

The day before the festivities begin, Brockie’s Gwar family and fans will send him off with a Viking funeral. The band is also working on a barbecue sauce, a beer and a Gwar-themed bar in Richmond. Land even has his own endorsement deal with an electronic cigarette company.

“As much tragedy as we’ve gone through, it’s such a machine — it’s really hard to stop it.”