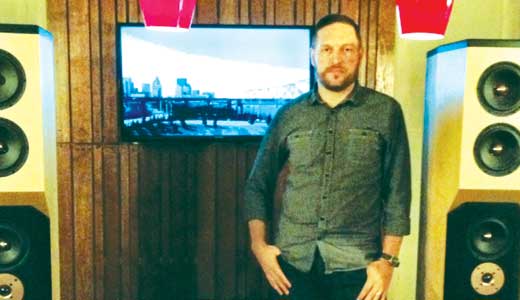 You might call Brian Lueken the David Geffen of Louisville. Like Geffen, Lueken has merged his business acumen with his creative interests to become a stalwart of the local scene. The founder of Decibel Mastering and the live concert-recording project Coincident Pair, Lueken operates behind the scenes of many Louisville acts, from Rachel Grimes to Ben Sollee, as a recording and mastering engineer.

Lueken attributes his keen interest to a sense of camaraderie between himself and his peers. “My friends were running labels and in bands, and I wanted a way to participate,” he says. “Paychecks and credit cards started going toward recording gear, and I was caught. I’ve been in and out of it at various levels of productivity for almost 20 years now.”

Initially that translated to Coincident Pair, where he has recorded a number of bands live, including what became One Less Heartless To Fear, the latest Shipping News album. As to why he makes live recordings only, Lueken says, “I have a high quality mobile rig that I can’t seem to stop upgrading. Every now and then, a project comes along that feels right and brings it out. The time involved in a recording versus mastering is a bit prohibitive, but I still thoroughly enjoy doing the recording side. I just have a day job that keeps it from being a responsible way to spend too much of my time.”

Now Lueken splits his time between his live recordings and Decibel Mastering, a studio he built in his basement. “It started with a realization that there was plenty of music happening in Louisville, but everything that got a professional mastering job had to leave town,” he says. “Lots of stuff was headed off to Chicago or Nashville at the time. I saw a hole and had the means to pull it off — with significant personal debt — and decided we needed a spot with all that gear I’d been seeing online, and in a room with those speakers and some place that wasn’t where it was tracked and mixed.”

As to what constitutes a solid mastering job, Lueken says, “It’s really different for every project. Every artist has a different aesthetic, and you try to find and promote that. Sometimes there’s an element the band or engineer heard after the mixes were final that they wished was a little different. My goal is having people listen to the unmastered version and then the mastered version, and hearing something that is better than it was when it came in, and translates in a car, headphones or crappy laptop speakers.”

Whether it’s recording heroes like Shellac or helping with the “Liberation Living Room” series, Lueken considers his opportunities a gift. Of one particular performance on the “Liberation” web series, he says, “Norah Jones was less than an hour, but that being on my résumé is ridiculous. Whether it means anything for future projects or not, I’ll have that one for the highlight reel when I’m 80.”