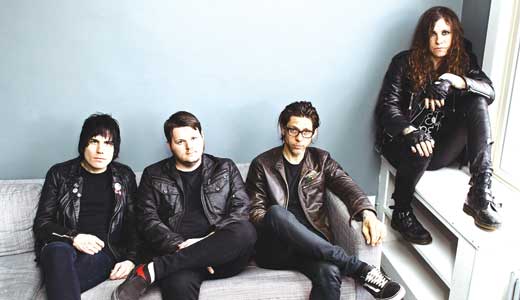 Laura Jane Grace, the songwriter, producer and lead singer of Against Me!, says her earliest memories are of gender dysphoria, the feeling of being disconnected from her body and her gender. Grace was born and raised in Florida as Tommy Gabel, but she never felt like a boy. When she was 4, she saw Madonna on MTV and thought, “That’s me! That’s what I’m going to be when I grow up!” A shy, socially outcast teenager, Grace turned to punk rock and started Against Me!. She has since toured the world, released six albums, fallen in love, produced a child and come out as a transgender woman.

But growing up, Grace despaired over her dysphoria. She had no role models and felt like she was bad, or wrong. Keeping these feelings crammed down inside was immensely painful, and halfway through writing Against Me!’s recent album, Transgender Dysphoria Blues, Grace decided to come out. First she told her wife, Heather, who completely floored Grace with her positive response. Then she told her band, and then she contacted Rolling Stone.

When it came time to record, Grace had a studio built and acted as producer. “For this record in particular, I really needed to be totally in control and not listen to anyone else’s opinion,” she says. The record, illuminated by her highly publicized transition, has become a beacon to transgender people. For other transgender women, Grace has become the role model she never had.

That Grace writes aggressive punk rock music presents a new idea about femininity and what it means to be a woman. Her famous growling voice has not changed with her hormone therapy (surgery is needed for that). She has always liked her voice; it was never part of her dysphoria. So what exactly makes a person feel like a woman? What is femininity? How important is it, and to whom?

“When I first started transitioning, I felt a real pressure to hyper-accelerate into overt femininity, which was unhealthy, because it was pushing me to move at other people’s pace over my own,” Grace says. “When it comes down to it, I’m still just a dirty punk kid at heart. I can go weeks wearing the same black tank top and black jeans. Then, when I come off tour, I step right into being a parent. When I’m waking up at 7 a.m. to take my daughter to Montessori school, I do not give a fuck about how I look stepping out of the house. I just want a fucking cup of coffee. Then I’m running around trying to get done whatever I need to get done before I pick her up from school again … I try to stay in the good habit of disregarding the way other people perceive me.”

When she gave her first interview two years ago, she hoped she would answer everyone’s questions at once. By now, Grace is ready for the world to grow bored with her gender so she can focus on her music and her family.

Against Me! plays Friday at the Forecastle Festival.